Some pics of LSU's many signees today!

It was a good day. It was a very, very good day. LSU took it's already highly ranked recruiting class, added more star power to it and didn't suffer any defections. It's the type of day you dream of if you follow recruiting closely. I've spent plenty of time analyzing, speculating and whatever else about this class, so now, we celebrate.

This is likely the best class of the Les Miles era. Our friend Kris Brauner is working on a more detailed analysis with some fancy charts and numbers for y'all, but to put it simply based on 247's points system in team rankings, this class is roughly seven points better than 2009 haul, which ranked no. 1 in the nation.

Let us enjoy the day, in pictures: 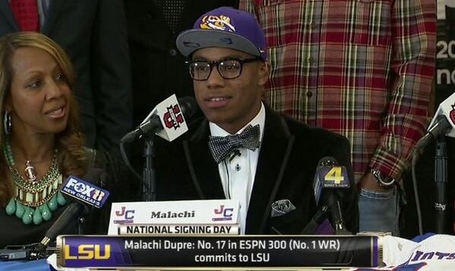 Beyond being one of the best WRs in this class, is there any question that Malachi Dupre is clearly the best dressed recruit? 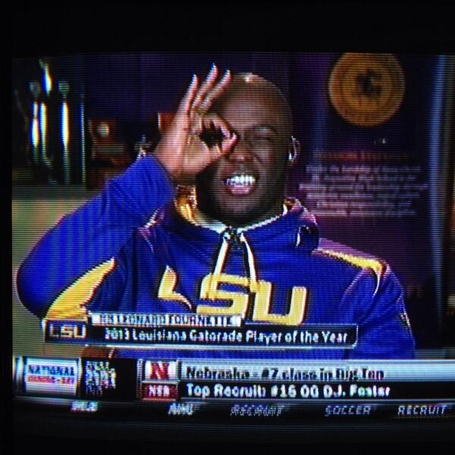 And here's what it looked like when @TheAdams_era Jamal Adams signed his letter of intent with #LSU. pic.twitter.com/CmhXbOPgQS

Davon Godchaux excited about being a Tiger #LSU @WBRZ pic.twitter.com/DDd3GsKxHW

Jacory Washington is an LSU Tiger. Just threw the Alabama hat off the table. #americanpress pic.twitter.com/ubn1rDexV2

Good get for @LSUfball by signing Teuhema...of course I'm partial to the Polys

Congrats to my best friend growing up in Louisiana, garrett brumfield for signing to LSU today. Hard work pays off pic.twitter.com/o4Qfr88uQx

Garrett Brumfield is set and ready to sign to #LSU. pic.twitter.com/zxqYfUKSRJ

Russell Gage signing with #LSU to be a DB from Redemptorist. Says it's been his dream. @wbrz #nsd pic.twitter.com/q4wiSkcy5c

Congratulations to one of my best friends @Gamma_9 for officially signing with LSU! pic.twitter.com/E4hc5orP5p

What a blessing man it's Official I'm a LSU TIGER 🐅🐅🐅 #GeauxTigers!! http://t.co/VyPF6loBDD

It was a great day, indeed.