Love The Ones You Got!

Share All sharing options for: Love The Ones You Got!

LSU fans will undoubtedly remember the LSU Signing Class of 2014 for the ones that got away.  A historic collection of talent within the state of Louisiana did not result in a historic signing class for the Tigers.   The thought of multiple five stars from Louisiana, complimented by several more from out of state started legitimate conversations as to whether LSU could put together the best signing class ever...by any school.   Things didn't turn out quite that good, but LSU fans should still be excited about this class.  How does the saying go?  "Don't worry about the ones you didn't sign.  Worry about the ones you DID sign".

So I thought I'd take a look at LSU's class and how it stacks up according to the sites that rank these things.   Here is a snapshot of the class: 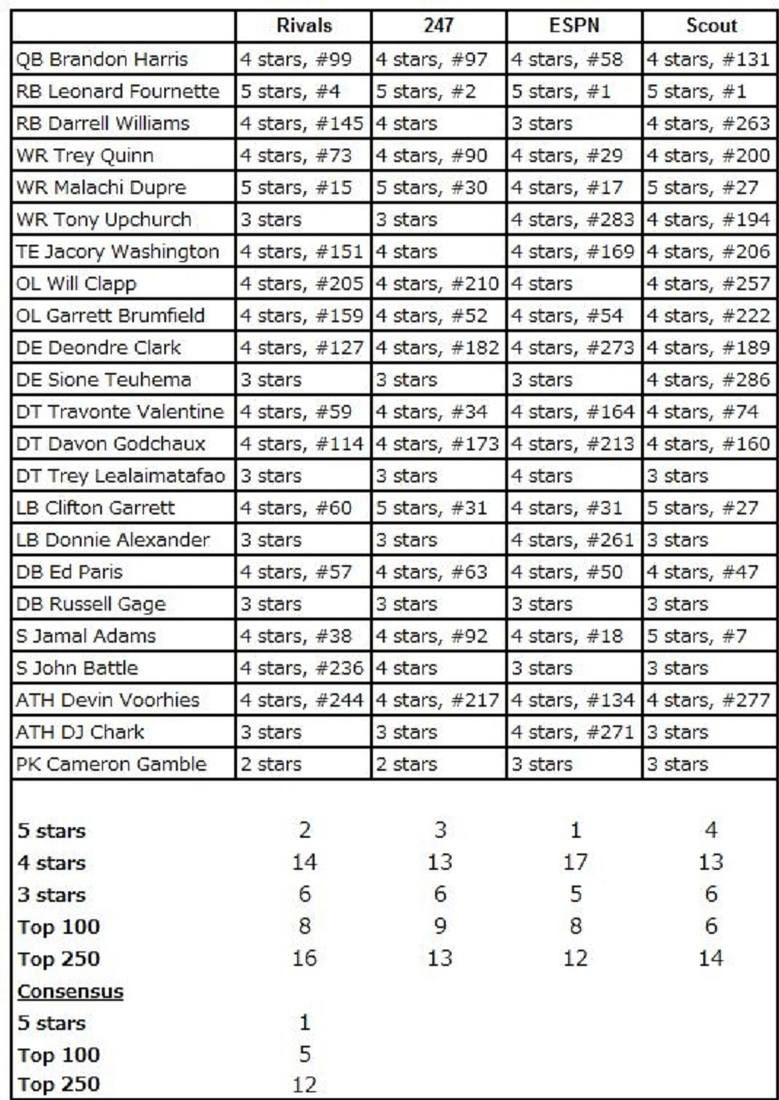 Comparing that chart to similar ones for previous years shows you that this is one of the best classes that LSU has signed in recent memory.  There are a lot of different metrics for us to look at here.

Does the class have enough elite players?   Enough guys that will be All-Americans?  The best way to look at that is to look at the number of 5-star players.  Obviously not every 5-star player becomes an All-American, but some of LSU's best teams had former 5-stars leading the way.  Michael Clayton, Ben Wilkerson, Glenn Dorsey, Early Doucet and Rueben Randle are just some of the guys that ended up as stars on SEC Championship Teams.   The sites vary here, giving LSU anywhere from one to four 5-star players this year, but at least one of the sites ranks this class among LSU's best ever in this category. 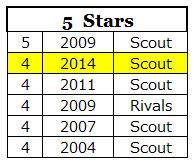 It's also nice to draw a line at the Top 100 players rated nationally.  Being ranked in the Top 100 does not garner quite the super elite status of being a 5-star, but it's close.  It's clear that in this category, the 2014 class is the best that LSU has seen. 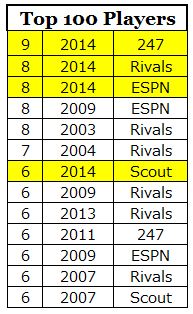 It took LSU eight years to nab 12 of these players, yet LSU achieved 42 percent of that this year alone.  It should also be noted that there is a pretty high "hit rate" for these consensus Top 100 players.  It's not perfect, but it's solid.  7 of those 12 have appeared on an All-SEC team and Ethan Pocic still has the bulk of his career ahead of him.   This year's consensus Top 100 players are:

Going back to stars, let's take a look at how many players were signed that are ranked 4 stars or higher.   Here are the high water marks: 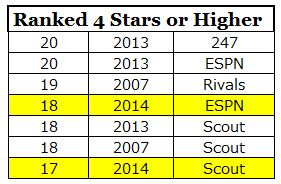 This year's group doesn't set a new bar, but it's way at the top of the list.

All of the sites extend their national rankings beyond a Top 100.  Rivals has a Top 250, 247 has a Top 247, and ESPN and Scout both do a Top 300.   In efforts to create a standard, I looked at the number of players ranked in the Top 250 among all sites.  However, ESPN just started doing a Top 300 in 2013 and 247 has only been around since 2010. Rivals and Scout only started doing extended national rankings since 2008.  Therefore, the ability to compare this class to others does not extend too far into the past.  Regardless, here is what we've got: 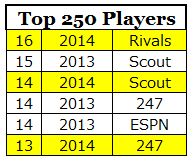 Do you see what I see with these last two charts?  When looking at the number of 4-stars and Top-250 players, the Classes of 2013 and 2014 are WAY out in front.   Surprisingly, the loaded classes of 2009 and 2011 did not have the depth that 2013 and 2014 have.  Needless to say, LSU is absolutely LOADING UP on top shelf talent, and a serious run at some championships in the coming years seems likely.  We saw LSU put together back to back excellent classes in 2009 and 2010, and those players made up the core of the 2011 SEC Championship season. 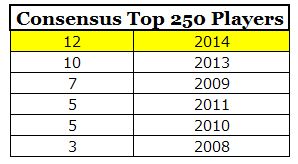 Again, you see 2014 and 2013 leading way, which should provide plenty of fuel to get excited for the near future.

So is this class the best that LSU has signed?  I'll leave that up to you to decide.  Some people put more stock into what you've got at the very top of the class, while some think having a deeper class is more important.  The truth is that only time will tell how this class stacks up.  But on Signing Day, it's tough to not be excited.  It's tough for me to tout this as the "best ever" when LSU signed just two offensive linemen when that was such a big position of need.  But this class is certainly way, way up there and is one that is capable of winning a championship.

Would this class look better with Speedy Noil, Gerald Willis, Tony Brown and Cameron Robinson?  Of course!  That's what we were all hoping for until #5for5 on January 2 knocked us back to reality.  But if THIS class is what LSU gets when many consider it a monumental disappointment in the state, well then....that's pretty good.