The Top 10 LSU Basketball Games of This Millennium: Part 1

Join us for a weekly series as we review this generation's LSU hardwood classics.

Share All sharing options for: The Top 10 LSU Basketball Games of This Millennium: Part 1

It's no secret this millennium hasn't exactly been LSU basketball's finest hour. From a pair of off-putting coaches to wild inconsistency between one season and the next, fans have been left throwing their hands in the air more often in bewilderment than celebration.

All of that can be true and yet... there's still been some major high points. LSU basketball has always had a strange pull on me, even more so than the two consistently successful high-profile Tiger programs. While this century has often been an exercise in exasperation, there's no denying that LSU can produce some drama and even serious results when it reaches those peaks.

This series is my attempt to chronicle those zeniths, reliving the players, moments, and dramatics that have made LSU basketball a worthwhile follow despite its flaws. Starting this week and going until mid-March, I'll be posting write-ups and nostalgic remembrances two games at a time for a countdown of the Top 10 LSU basketball games this millennium.

Without further ado, here's the first contribution, starting with a handful that just missed the cut.

Florida 81, LSU 74 (OT): Feb. 13, 2001 - A loss, sure, but LSU fought valiantly against the No. 9 Gators, who were the defending national runner-ups. Down to five scholarship players during an underachieving season, the Tigers still led Florida by two with three seconds left. But Jason Wilson foolishly fouled Udonis Haslem on a full-court inbounds pass, and he made both foul shots to force overtime. Teddy Dupay poured in 11 during the overtime session, nullifying an 18-point night from Ronald Dupree.

LSU 55, Auburn 53: March 2, 2000 - Remember when Auburn was good at basketball? Not that they care much on the Plains with the Malzahn Machine's first year producing like it is, but the War Eagles have been almost a complete non-factor since the Cliff Ellis days. And when LSU was rolling in 2000, there was some bad blood here. Auburn star Chris Porter sat out for this game and his absence was felt, with his teammates shooting an abysmal 6-of-36 behind the arc. LSU rode Jabari Smith and Stromile Swift to a huge rebounding advantage and Smith's 3-point play with 16 seconds left sealed a SEC West crown for the visiting Tigers.

LSU 113, Ohio State 101 (2OT): Jan. 15, 2005 - The 5-Starter Score. That's what this game was. Each Tiger starter scored 15-plus points to offset literally zero bench points and LSU held off a solid Buckeyes squad in Baton Rouge. Mitchell dropped 32 points and played every minute along with Brandon Bass, who poured in 29 and snatched 10 boards. Even Tack Minor got into the act, playing one of the best games of his career with 17 points and 10 assists. The Buckeyes got revenge the next season in Columbus, though, stealing a 78-76 New Year's Eve win that was just as good.

LSU 71, West Virginia 68 (OT): Nov. 26, 2005 - This was the first hint that Final Four team might have something special. The No. 13 Mountaineers were fresh off an Elite Eight run and had five seniors, but Darrel Mitchell drilled a 3-pointer to force overtime before producing the game-winning trey with five seconds left in overtime. The only thing that kept this game from being higher up on the list was the timing. It was too early in the season. LSU would struggle through some close non-conference losses before eventually winning the SEC and reaching Indianapolis. Still, this is an overlooked gem in that season for the Tigers.

LSU 97, Alabama 94 (3OT): Feb. 23, 2013 - This was the toughest game to leave out of the top 10. LSU came back from 10 points down in the final 3 minutes of regulation and used Anthony Hickey's 3-pointer in the third extra session to triumph in the PMAC's first ever triple-overtime game. Trevor Releford scored 36 for the Tide but double-doubles from Charles Carmouche and Johnny O'Bryant III propelled LSU to a grueling win. More than anything, this game is a symbol of the Johnny Jones era at LSU, highlighting his teams' relentless nature no matter the deficit.

And now, we reach the first two entries in our top 10.

Talk about a Valentine's Day treat. This one gets the nod over the triple-OT game against Alabama for a few reasons. State was ranked, it was slightly-higher quality basketball, and the win actually put LSU into a postseason tournament. In fact, this was - amazingly - probably Trent Johnson's best SEC win in Baton Rouge outside of the 2009 season.

And what a way to do it. LSU stumbled into the game two games below .500 in the SEC and a meek 14-10 overall. The Bulldogs appeared headed for a NCAA Tournament berth and far bigger things than beating the Tigers. They looked it early on, jumping out to a 17-point first-half lead behind Arnett Moultrie and Renardo Sidney's one-two punch inside. It looked for a long time like a loss that might get Johnson fired.

Instead, LSU clawed back, starting with a nifty 13-6 run to end the first half that included Ralston Turner's buzzer-beating 3. The Tigers scored the first seven points of the second half and it was on in the PMAC, which had a conspicuously small crowd for an 8 p.m. Tuesday tip against a ranked opponent, likely due to the holiday.

But of course, this game is memorable for its stretch run. Justin Hamilton missed a 3-pointer as the clock hit 0:00 to force overtime. He made up for it by scoring LSU's first five points in the extra period, and the Tigers seemed to have the game sealed, up 4 with 21 seconds left. But Sidney banked home a 3-pointer and Turner threw the ball away on the ensuing in-bounds attempt. Anthony Hickey fouled to prevent a bucket and State made 1-of-2 free throws with 11 seconds left to tie it.

Hickey then produced one of his notorious clutch moments at LSU, knifing through a State double-team off Hamilton's high screen and careening toward the basket before floating a tear-drop runner that rimmed in with 1.4 seconds remaining. Andre Stringer swiped the quick in-bounds pass and the celebration was in full force. For one night, Trent Johnson and LSU felt some love before the next two months featured the Tigers' three-game collapse to finish the season and Johnson's sudden departure for TCU. Hickey's still around, albeit missing some late shots this season against Rhode Island and Ole Miss. He'll always have this thriller, though.

Almost eight years to the day before the epic triple-overtime game the two programs played in the PMAC, there was already a classic Tide-Tigers tilt on the books this millennium. Ross Neltner's buzzer-beating tip-in pushed LSU to an eventual split of the SEC West title with Alabama and was the first home win against a ranked team in nearly 3 years.

LSU opened the game on a 15-2 run, but the Tigers only scored five points in the final nine minutes of the half (See? Long scoring droughts aren't a new phenomenon for LSU) as Bama closed the deficit to a deuce by halftime. Tack Minor facilitated a more consistent second half, and finished with a 16-point, 10-rebound, 5-assist game.

This was one of the last times Brandon Bass and Big Baby played together and boy, did they make it count. The duo combined for 26 points and 22 rebounds to match the Tide's formidable pair in Kennedy Winston and Chuck Davis. (Side note: I still maintain LSU wouldn't have made it to the Final Four in 2006 if Bass stayed. He was a great player but his insistence on shooting long jumpers and an overeager defensive game in college wouldn't have been good matches for that 2005-06 squad.)

So there was LSU holding a 7-point lead with three minutes left and a raucous gold-clad PMAC behind it. Game over, right? Well, not exactly. Bama drilled two 3-pointers as the Tigers' shooting floundered, eventually leading to a tie game on Winston's acrobatic trey with 15 seconds left. Bass took the clock down before hoisting a contested fadeaway that bounced off the rim.

Enter Neltner, who was mostly an afterthought on a supremely talented roster. waiting on the first game-winner of his career by narrowly beating the clock with a brilliant tip-in. There used to be a few videos of this finish, but I can no longer find them. I wish I could, because it's always fun to see Bass in a LSU uniform and sadly, it was Neltner's final days in the purple-and-gold. He transferred to Vanderbilt after the season (Now, HE could have helped that 06 team, which had a very thin rotation), and was a solid contributor there for two years.

Yet, most LSU fans still have a soft spot for him. Maybe it was the John Brady factor, as many couldn't fault Neltner for wanting to quit playing for a coach who was infamously unpopular. Or maybe it was the memories of this game? If that's the case, this was not a bad impression to leave. 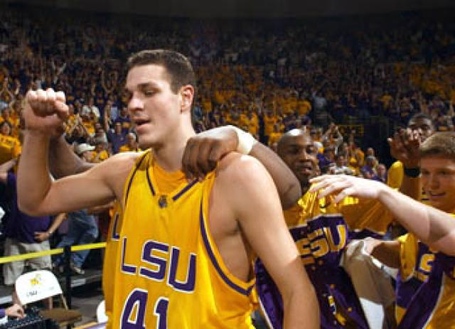