Because everything can be improved with some pork and barbecue sauce. BONUS: doubles as a standalone queso recipe.

Hi friends! Junior Chef Zach filling in for Executive Chef Billy, bringing you another mouth-waterin', salivation startin', diet thwartin' recipe. It involves gratuitous amounts of pork and cheese, a little bit of spice, and corn chips. I have a smoker, I'm willing to use it, and I'm bringing this to you: pulled pork nachos. The good thing about nachos is it's such a simple recipe, and it's easy to play around with, so I invite you to make it your own.

A few notes before we jump in. I used store-bought chips and barbecue sauce for this recipe, because a man typically cannot do all things, and this is no exception. My attempts at a thicker sauce have been unsuccessful. However, if you'd like to give Executive Chef Billy's barbecue sauce recipe a try, it would suit this perfectly. I went with Stubb's spicy barbecue sauce.

As far as chips go, anything that's sturdy will work. I went with a cheap bag of chips for $2 at Winn-Dixie simply because they were the hardest ones to break through the bag. Also, if you shop at the Winn-Dixie on Burbank and Lee and got a bag full of partially-crumpled chips, I'm sorry.

On to our protein: the pork. If you're going to go for it, cook and season it however you want. You could use Billy's recipe, or even the one our friends at Shakin' the Southland posted many moons ago. Cooking method is also immaterial. Oven, Crock Pot, smoker, whatever you want to throw in will work. I injected mine with apple cider, and rubbed it down liberally with a rub consisting of roughly equal parts dark brown sugar and Slap Ya Mama Cajun seasoning. The pork used in this recipe sat in a smoker for about eleven hours, teetering between 200 and 240 degrees Fahrenheit. The smokiness certainly adds to the flavor, but it certainly won't feel like it's missing something without it.

Besides, I haven't even gotten to the best part: THE QUESO (!!!). Okay, first off, let me state that this is the only real cooking part of this segment. As I said before, nachos are exceedingly simple, and this queso recipe can be played around with extensively so long as you stick to the basics. The fine folks at the Pennsylvania Macaroni Company provided a nice ratio for you to follow, which I've modified below. You can multiply this for however many servings you may need. To make it easy when I was cooking, I multiplied everything by four simply because I didn't feel like cutting a stick of butter. Multiply this for however much you think you might need. Multiplying this by four filled a medium-sized pot up almost the entire way with cheesy goodness. The ratio is as follows:

Begin by setting your stove to a low-medium setting and melting the butter. Once it's melted, add the flour and begin whisking away until the mixture is nicely...mixed. It should look like this. 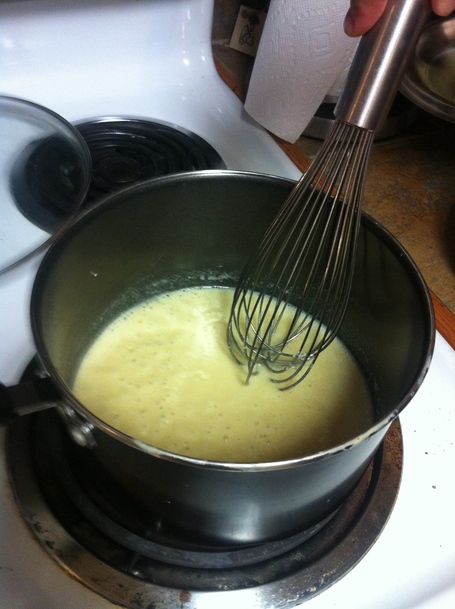 Next it's time to turn up the heat a little bit (I usually put it at medium), add however many cups of whole milk you'll need, and whisk away some more. The milk, butter, and flour mixture should begin to thicken, which is when it's time to add the cheese. 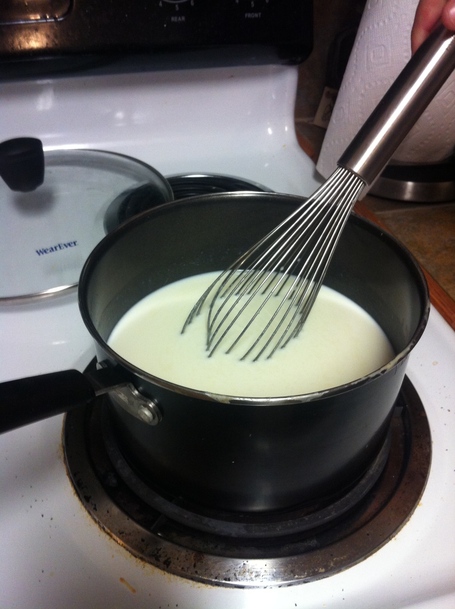 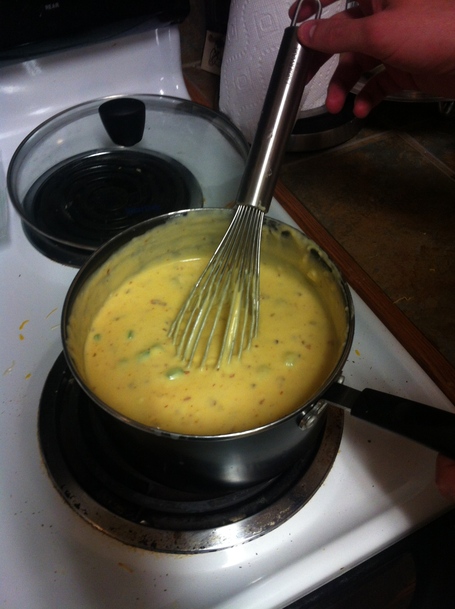 Now then, onto my modifications with this queso recipe. I added spice (LOTS of spice) by way of a few peppers. They are as follows:

Also, be sure to have a blender on hand.

ALL-CAPS PROTIP: DO NOT CHOP PEPPERS WITHOUT WEARING GLOVES AND TRY TO REMOVE YOUR CONTACTS, EVEN IF YOU WASH YOUR HANDS MULTIPLE TIMES, IT MAY NOT MATTER AND YOU MAY END UP IN THE FETAL POSITION ON THE FLOOR OF YOUR BATHROOM DUE TO THE PAIN OF GOD KNOWS HOW MANY SCOVILLE HEAT UNITS DIRECTLY ASSAULTING THREE OF YOUR SENSES AT ONCE 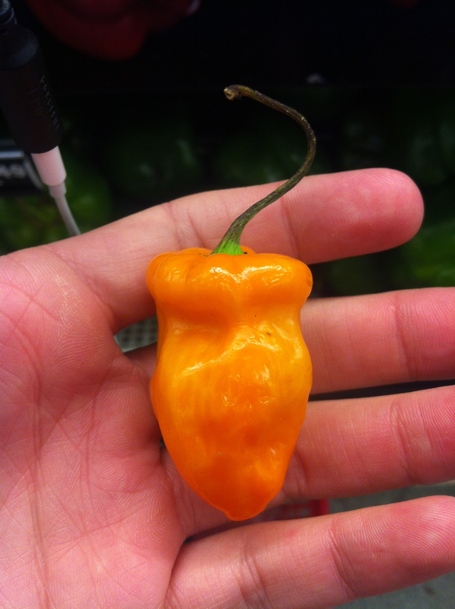 THAT PEPPER WILL HATE YOU AND EVERYONE YOU LOVE IF YOU DON'T TREAT IT RIGHT.

Anywho, where was I? Ah yes. Save the veins from the jalapenos (and if you're brave, the habanero), and set them aside after you chop them. I tossed the chopped jalapenos and habanero right into the pot. As for the chipotles, take three or four of them from the can and toss ‘em into a blender with the veins from the jalapenos/habaneros, and blend everything until you get a fine, liquid-like substance. It should be spicy and smoky to taste. THEN THROW THAT SUCKER IN THE POT AND MIX WELL OHHHH YEAAAAAAHHHHHHH.

And honestly, that's pretty much it. Toss it over some corn chips, put the pork on top, and fix it up however you want to do it. I added pickled jalapenos and grilled red onions (chopped and tossed in a skillet with some olive oil until browned on the outside), but really you can add whatever you want. Finish it off with a few sprays of sauce, and brother, you've got yourself some nachos going. 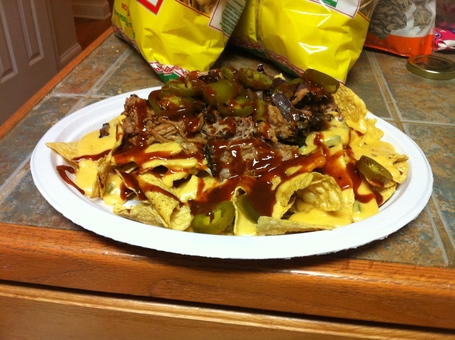