The single biggest question of every LSU spring football practice.

The [Redacted] Era is over. LSU has talent at quarterback. All three of these guys were four-star recruits, and Brandon Harris was the No. 3 dual-threat quarterback in the class of 2014. With a job that's relatively open, this is probably the best competition LSU has had since JaMarcus Russell and Matt Flynn were in town.

In addition to that, they're working with the quarterback coach and offensive coordinator that helped push Zach Mettenberger and the LSU passing game to their amazing potential in 2013, Cam Cameron.

On an individual level, Anthony Jennings appears to have the most command of the offense and the huddle. He carries himself like a player that wants to not only be the starting quarterback, but a team leader. He hasn't shied away from owning the struggles of his only start, and constantly encouraging teammates and helping his fellow quarterbacks (numerous Big Cat drill videos feature Jennings in the center yapping it up with all the offensive players involved).

Harris, of course, has something that you just can't teach, and that's a next-level ability to throw the football. The ball really jumps out of his hand hits a receiver's with a snap. He's going to see the field eventually; it's just a matter of developing that talent.

Rettig hasn't gotten as much run as the others in local media, and by most accounts has had the toughest transition after playing all of high school in a shotgun, Air-Raid style attack, both in terms of taking snaps and reading defenses from under center. Still, he provides good depth and a long-term investment.

The Tigers may have found a talent oasis after the great quarterbacking desert of 2008-11, but experience is still in short supply. Anthony Jennings took advantage of being a 2013 early enrollee and took the backup job from Stephen Rivers, leading to his transfer, but he's still bereft of much playing experience. He saw time in a few spots last season as a short-yardage quarterback sneak guy, and some garbage time, but that mostly consisted of handing the ball off.

And then came the extremes of the that amazing 99-yard drive to beat Arkansas after Mettenberger's injury, followed by a pretty rough outing in the Outback Bowl (7-of-19 for 82 yards and a pick). Jennings looked tentative and inaccurate throwing the ball, albeit in difficult weather and against a very good Iowa defense. As I said after the game, if there's a silver lining, it was that he was relatively careful with his reads and largely made good decisions. He just didn't connect on the passes.

Predictably (and depressingly so), most of the fans that had been fairly quick to crown Jennings after the ending of the Arkansas game have panicked.

What's the Goal this Spring?

A year ago, with a fairly established starter in Mettenberger, Cameron used the spring, not so much for a true installation of his playbook, so much as a chance to find out exactly what elements of it would work the best. "Finding out what Zach does well and doesn't do well," was a sentence we heard a couple of times from the veteran NFL quarterback guru.

It's a year later, and for all the talk from the local media about developing a new style to fit the skillsets of these quarterbacks, that's probably a step or two ahead of where things are actually at. The value in these practices is largely probative -- figuring out their strengths and weaknesses. And I imagine that's the approach Cameron is taking. Oh sure, there's probably a pecking order forming, and the players are certainly competing for the starting job, but that competition won't get serious until fall camp. Right now, Cameron's probably just trying to get a gauge of just what he has in these three. Who does what well, what areas of the playbook fit these quarterbacks best, what areas need to be expanded upon and which ones need to be dialed back a bit.

LSU is still going to run a multiple-formation offense that builds a complimentary passing attack to power and zone running. The core values of this offense aren't going to change just because there's a new quarterback, I cannot emphasize that enough.

What am I Watching for?

There's not going to be a "winner" of this quarterback competition after these practices. Jennings probably has the leg up due to his experience, and Harris' talent seems to have passed Rettig for now, but as I said, the real competition will be this summer and into August. Don't expect a true starter to be named until the opener with Wisconsin gets closer.

It's no surprise that there's been a lot of anxiety with regards to the competition, but it's been disappointing to see the way people have reacted to the idea of a "dual-threat" quarterback back under center. Local media, especially talk radio, haven't exactly helped with suggestions that LSU has to "pick a style" exclusively.

This isn't choosing between Drew Bledsoe and Kordell Stewart. This isn't choosing between Matt Leinart and Pat White. And for the love of God people, it ain't choosing between Jordan Jefferson and Jarrett Lee, either. The former of those two has left an image that people can't seem to shake, that of a quarterback running 10-20 times a game and struggling to throw the ball. That sound like a DUAL threat? If so, please kindly pick up the nearest copy of Webster's Dictionary. A dual-threat quarterback can make plays with both his arm and his legs. It's not an either/or proposition. A quarterback that doesn't do either thing well is...well...a no-threat.

As far as "style," the suggestion that pro-style offenses and dual-threat quarterbacks don't mesh ignores, not only LSU's last two national championship teams (Matt Flynn and Matt Mauck made use of their scrambling/running ability plenty of times) but also last year's national championship team at Florida State. Jameis Winston was not only labeled a dual-threat quarterback out of high school, but he was backed up by 6-5, 230-pound pocket passer Jacob Coker last season.

Good coordinators fit their game plans to the strengths of their quarterbacks, and the more assets said quarterbacks can bring to the table, the better. No coach in the country, anywhere, goes around looking for quarterbacks with the idea that they want the biggest, slowest guy they can back there throwing the ball. They'd all prefer the mobile option, all things being equal. Andrew Luck was considered a rare quarterback prospect in the 2012 NFL Draft because in addition to his outstanding passing ability, he was a hell of an athlete with a 4.6 40-yard dash time. And for all of Robert Griffin III's flashy mobility, it was completing 72 percent of his passes and throwing 37 touchdowns that won him the Heisman Trophy and made him a top-five pick.

Now, if you're a coach more invested in running the option like a Paul Johnson or a Rich Rodriguez, sure, you might look for a more athletic type that doesn't have to be the most polished passer. But that's not the style of offense LSU wants to run, and those weren't the type of prospects Jennings or Harris were, either. Both drew positive reviews for their passing talents at Elite 11 regional camps, and both have said multiple times that they hate the dual-threat label in general, and view their feet as a complimentary weapon to what they can do throwing the football.

Will Cameron likely take advantage of their ability to run the football? Of course -- he'd be stupid not to. But the basics of LSU's offense aren't going to change. LSU will spread the field on occasion, but it's still going to line up in the I-formation and run downhill. The occasional option or zone-read play won't change that. The latter is nothing but a zone run out of the shotgun or pistol with the quarterback reading the un-blocked defender, and if Jennings/Harris are doing things right, more often than not they're going to be handing the ball off and giving the Tiger offense an extra blocker at the point of attack. 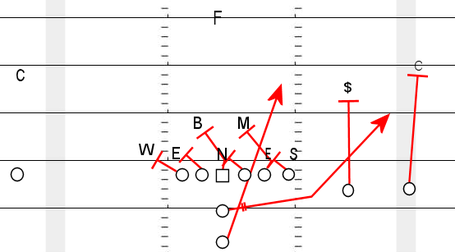 Is the passing game going to look as good as it did last season? Probably not. Mettenberger and Landry/Beckham were just that damn good. But it can certainly still be effective and efficient. Even if the quarterbacks are limited as passers, a smart coordinator can find ways to construct a managed attack that enhances whatever they happen to do well. We've seen it all over the place from coaches like Jimbo Fisher, David Cutcliffe or Jim McElwain at Alabama. Hell, we watched Greg Studrawa and Steve Kragthorpe do that very thing in 2011 through the first 13 games. Gary Crowton failed to do it here, but he's not running the offense anymore.

A smart coordinator (which I believe Cameron to be) can use a lot of tactics to work with iffy/limited quarterbacks, especially ones that have the added dimension of mobility. There's misdirection passes like bootleg and waggle throws off of play action, especially to tight ends and running backs. And there's also the screen game -- something LSU hasn't really employed since 2007. And of course, there's a powerful, baddass running game, which -- hello Leonard Fournette and an offensive line that should be dominant. LSU's gameplan against Iowa didn't exactly work out the way we would have liked, but it had the right idea. Cameron worked Jennings in slow with some short throws like stick routes, slants and screens. Jennings never did work his way up to hitting his deep passes, but the overall approach was still sound. If LSU does these things while Jennings and/or Harris develop, the passing attack should continue to be effective.