Share All sharing options for: And the Valley Drinks: White Birch Brewing's Rusalka

I'm told that spring has started, not that you'd readily notice it in Baton Rouge at the moment. Just the same, I'm going to try and get my dark beer jones on and try as many stouts and porters as I can until the weather turns. This week's entry comes from the wilds of Hooksett, New Hampshire, courtesy of White Birch Brewing. 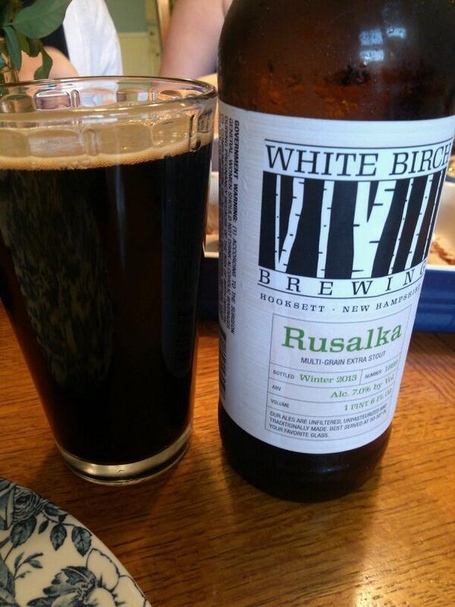 The brewery opened in 2009 and has three flagship beers and couple seasonals and special editions. We're trying out their Rusalka, a multi-grain extra stout. They ain't lyin' about the extra part either, this sucker sticks to your ribs.

Welcome to the dark months, my friend, pour yourself a beer. Goodness knows you've earned it; it's cold out there, and this beer was made for you.

Rusalka is a scary monster, a black-as-night stout named after the seductive water demons of Slavic lore. In less civilized times, the Rusalka were said to rise to the shores of rivers, to dance and swing from the branches of birch trees. Men who saw them would fall under their spell and find their death at the bottom of the black and swiftly moving current.

It's brewed with barley, wheat and oats, giving this beer a really complex flavor and texture. Its available in 22-oz bombers and comes in at about 7 percent alcohol-by-volume. The bottle recommends serving it at about 50-55 degrees. I tend to prefer it a bit colder, but that's just me.

This is a very rich, very dark beer with a brown head and a very malty bouquet. The roasted malt flavor hits you very quickly, but it transitions into the sweetness of the malts very smoothly. It's the roasted flavor that hangs through the drink though. Not quite coffee-like, but thick and dark. The multiple grains really begin to hit you as the flavors close. There's a true texture to this brew, almost a graininess. It's definitely too thick for a session beer, but the smoothness of the flavor really balances well with the thicker texture. I give this one a nice four out of five stars.