Back again with my favorite Louisiana brewery, but spreading my legs a bit.

Share All sharing options for: And the Valley Drinks: NOLA's Hopitoulas IPA

If you've followed my entries in this series, a pretty constant theme has been my love of dark beers. Brown ales, porters, stouts, etc...But a man does not live on roasted malts alone, and in the last few months I've been stretching my taste buds a bit. I've never been much of an IPA fan. But lately, between my trip to Colorado, the recent beer fest in town and last week's Craft Beer Week festivities, I've had to occasion to sample some pale ales and a few IPAs. Nothing to dry or too crunchy, just samplin' to see what I like.

And after talking to the guys from NOLA Brewing at their event at the Chimes last Wednesday, I decided to give their Hopitoulas IPA a try. 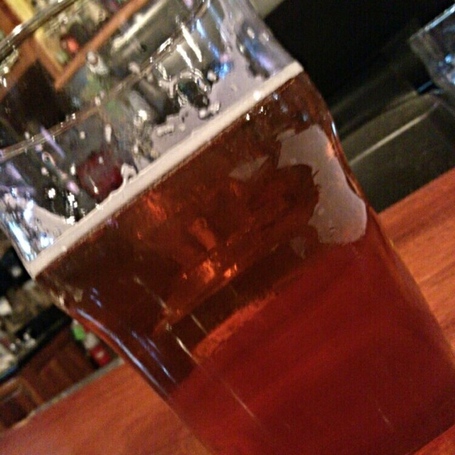 First off, you can't beat that name, right?

Hopitoulas was the third addition to our year-round beer portfolio.  This 6.5%ABV ale is a West Coast style India Pale Ale that combines six malts and six hops with additional dry hopping for three weeks. It takes about a month and a half to make each batch and we think it is worth the wait.  Hints of pine and citrus with a powerful, yet balanced hoppy flavor, Hopitoulas packs a punch that you won't forget.  Available on draft and in 16 ounce cans.

The beer even got a little viral video publicity in the last week from this very NOLA incident.

This has a bit of an amber color for an IPA, and the bouquet combines that pale malty sweetness with just a hint of the flowery freshness you'd expect from a hoppy beer. The flavor is very balanced and consistent throughout. A little bit of light malts with just a hint of bitterness that goes down and hangs on your tongue a bit on the aftertaste. There's also a slight, tiny dollop of an almost syrupy sweetness that just cuts through the bite, which is fantastic between sips. I'm still not sure that I'm ever going to be a hardcore hophead, but this is a great starter beer for finding out. I give it a strong 4 out of 5 stars. Definitely a beer I'll be drinking in the future.