Getting to know our first victim

Usually, this time of year, LSU gets a tasty SWAC team ranked in the mid 200's in the RPI as their fourth seed. Well, this year, LSU got one of the toughest four seeds in the nation. Sometimes, the Wheel of Fortuna goes up, sometimes it goes down. This year, it went down.

SELA won the Southland tournament, and now is a bear trap for an unwary top seed. Now, they have played LSU and ULL both this year, and lost to each. However, those were midweek games and we all know neither team is putting forth their top lineup or in this case, pitchers. Yeah, Andro Cutura and his 1.72 ERA looms large for the Tigers. 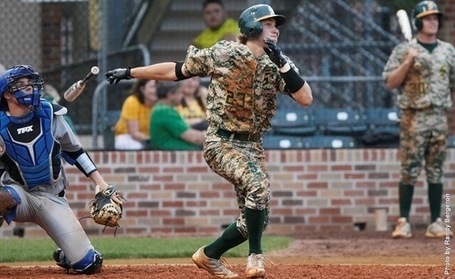 I have no words. The yellow mustard uniforms are also pretty horrific, but this is a new level of awful. In the name of all things holy, this must be punished.

Pretentious Movie of the Week 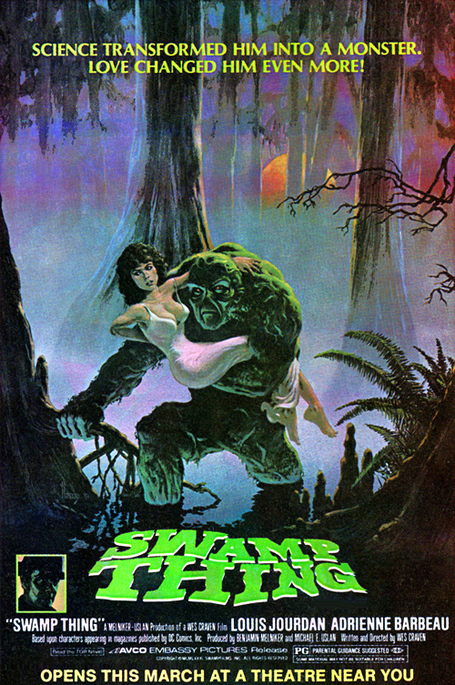 I'm a huge fan of B-movies, particularly from the 1970s and 80s. Something in their renegade nature appeals to me, especially how people get off their asses and make something fun without waiting for the magic studio fairies to come down and give them a bunch of money.

Swamp Thing, set in an anonymous southeastern Louisiana  bayou, tells the story of how the idealistic scientist, Alec Holland (played by Ray Wise of Twin Peaks fame), is sabotaged by his evil corporate bosses. The lab accident is meant to kill him and protect the evil company, but instead turns him into monster made out of vegetation. If you don't want to see the movie based upon that description, then I don't even want to know you.

Seriously, it's great fun. This is Craven's audition tape for the studios, showing he could do action and make a more family-friendly film than his early stuff. He finds the right balance here, and you can see the wit of the guy who would give us an iconic slasher villain in Freddy Krueger just two years later.

Even making a mental discount for playing in the Southland, those are some impressive numbers from the top two hitters. But it drops off real quick from there. No one else on the team slugs 400 and only one other player has a 400 OBP. They do attempt a lot of stolen bases at a below average rate, and they hit 291/387/361 as a team. Yes, they have a higher OBP than slugging. That's not a real good sign, usually. They do average nearly 6 runs a game, but those rate stats will make it difficult for them to get anywhere near that this weekend.

That's impressive. I don't care where you pitch. The Lions will throw their ace at LSU, and he's good. He's got three plus pitches and he relies heavily on a sinkerball. To beat LSU in the Box, you want to keep the ball on the ground, and that's what he does. The rest of the staff is also deep and experienced with a pretty effective pen, but against LSU, this game will be won or lost by Cutura. They will likely ride him until his arm falls off.

Cutura should keep the ball down and in the yard, but there's only so much one can do against LSU's offense. The Tigers are going to score runs. Not a ton of them, but we're probably not looking at the Florida game again. I just don't see how SELA is going to score the runs they need against Poche'. Yeah, he's not Nola, but he's pretty darn good in his own right. LSU is stepping up in the pitching department as well. That's the difference here.