My long barbecue odyssey continues, now trying out ribs. Will these work for your tailgate? You tell me.

Share All sharing options for: Cookin' ATVS Style: My First Attempt at Ribs

For the last year or so my successes and failures with barbecue have been chronicled here to some degree. Beyond chicken and pork roast, I just haven't tried that much, and with an emphasis on tailgating recipes planned for this summer, I don't know how many opportunities I'll have. Let's face it, there just isn't always time before a game for a 10-12 hour smoke for some pulled pork or brisket.

But I'll be damned if zrau is going to do all the barbecuing ‘round heya! Luckily, ribs can be done in a fairly reasonable amount of time -- 5-6 hours or so, especially if you do the 3-2-1 method. I'd heard it discussed before, so I looked into it and found a solid how-to here at Major League Grilling. After some further research, I didn't exactly follow the instructions, because frankly the whole foiling step can be a huge pain in the ass, and honestly I'm not trying to win any competitions here.

I worked with baby backs, because that's my wife's preference, and came up with my own mop sauce out of a can of cheap beer that I had lying around from a previous party and a couple teaspoons each of soy sauce and apple cider vinegar. But rather than basting it on with a brush, I chose to spritz with a spray gun. 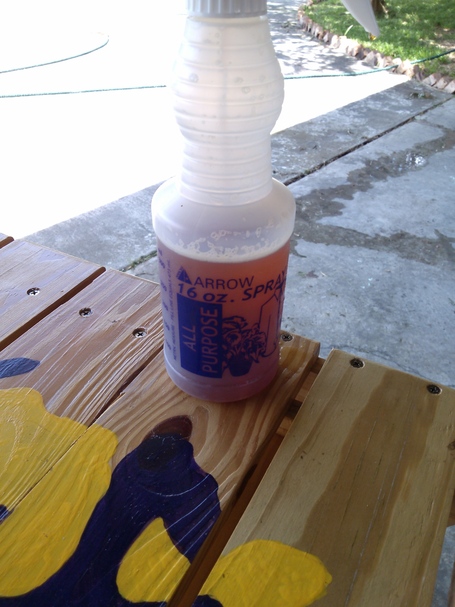 Your mileage will vary with all of this, but this came out pretty good for me, and with some slight tweaks, I'll definitely be trying again.

1.       For starters, this is an incredibly important part. There's a thin, but tough, membrane on the underside of the ribs. It has to come off. You may need a knife at points to work it, but once it starts to come you should be able to peel it off, almost like plastic wrap. 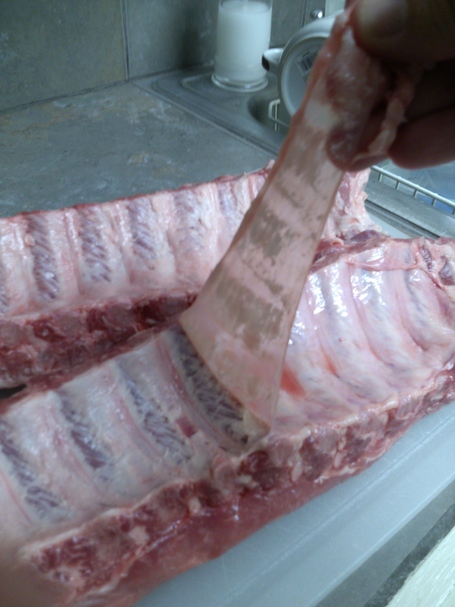 2.       From there, time to rub them down. I went with Bone Suckin' Sauce brand's rub, which I've previously used in some degree on chicken. It's a little bit of a sweeter rub, so it probably works a little better on pork. I rubbed these down and let them sit in the fridge overnight, but that's not necessary. An hour or so works fine. 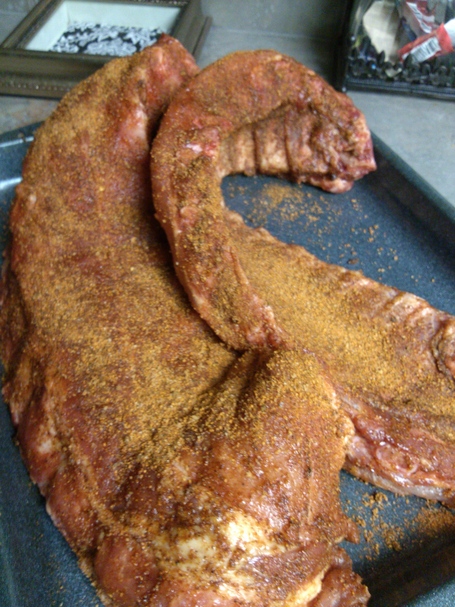 3.       From there, get your smoker going with your wood of choice and put the ribs on. My surface was a little small for the length of these, but I made it work.

4.       Now, what the 3-2-1 method translates to, basically, is three hours of a dry smoke. From there, the rub should have begun to caramelize into a nice bark. 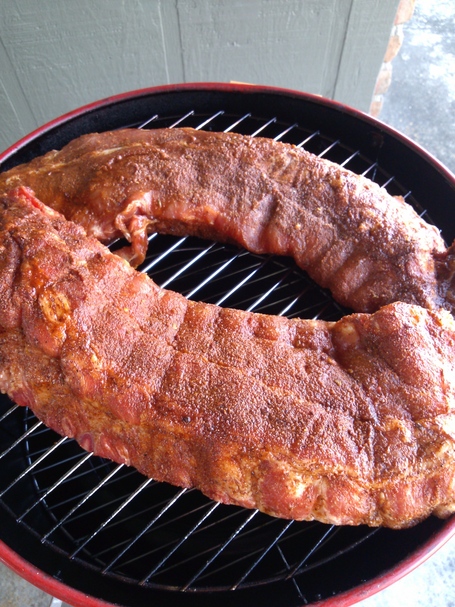 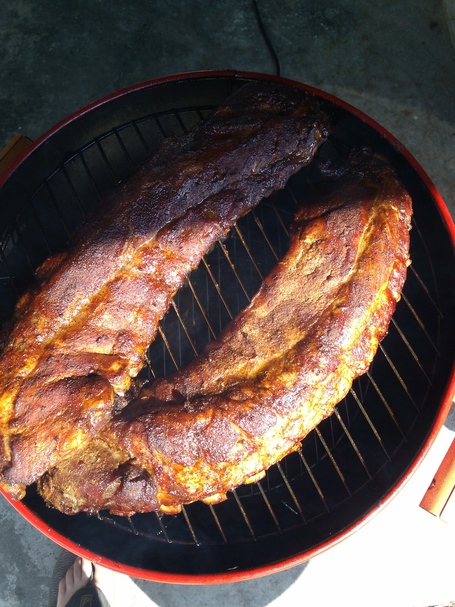 Note how the meat is starting to pull away from the ends of the bone. That's an easy way to tell that the meat's cooking.

5.       This would be where you would remove the ribs to cover in foil with some additional fat and seasonings to help further break down and tenderize the ribs. Or, you can do what I do and just start a regular schedule of spritzing/mopping with a light sauce. Either way, the ribs go back on the smoker for another two hours. I spritzed the ribs thoroughly about 2-3 times per hour. If you go with too much, you'll risk dissolving away some of the dry seasonings.

6.       In the meantime, fire up your grill with a relatively low fire and prepare your sauce of choice. After the two hours is up, transfer the ribs to the grill (if you're at home you can also do this in a 350-degree oven in a roasting pan), and finish them off, applying the sauce steadily for the final hour, until you have an even coating on both sides. The sugar in the sauce will char up and form even more bark. Once you're done, move the ribs to a large pan, cover in foil and allow the meat to rest for a half-hour or so. If the surface is a bit overdone, feel free to throw on one last coat of sauce.  They should be perfectly tender with a slightly crispy, flavorful bark.