Everybody has their way. This is mine.

Like I said last week, summer is here, so time to start cooking like it. Get that grill out, invite some friends over and ice down some cold beer.

It's as good a time as any to start working on some tailgating recipes as well. One does not work with the smoker or black pot alone. The grill has its place.

I've admittedly let this series slide a little bit this offseason, but over the next few months I'm going to make a concerted effort to get back on the horse and focus on a lot of recipes that will be useful come footballs return. And I figured the best place to start would be a bit less of a true recipe than a method, but one that's yet to steer me or my family wrong.

There's not going to be much of an ingredients list here. Again, this is more of a method than a recipe. Besides, the proportions will be whatever works for you and the crowd you're trying to feed. Chicken is chicken. Cooking boneless breasts or thighs have a time and place. Wings can be wonderful as well -- but is that really barbecue? We're talking bone-in, skin-on chicken, which is always more flavorful.

For the birds themselves, my experience is that the best way to feed large groups is to just go with halves. Your local grocer's butcher will cut the birds in half for you, from there you just clean and remove the giblets. But most places will have some pre-cut birds, with the breasts, wings, thighs, drumsticks, etc... all split up (that's what I have pictures of here). I say go with what works for you, though on the halves a good rule of thumb is one full bird for every three adults.

Next up is the season rub. I'll admit to be a bit of an agnostic on this -- I've cooked outstanding chicken using nothing more than a basic Cajun seasoning like Tony Chachere's or Slap Ya Mama. My most recent concoction was about a 2:1 ratio of Bone Suckin' Sauce's Seasoning & Rub and Weber's Kick'N Chicken seasoning. 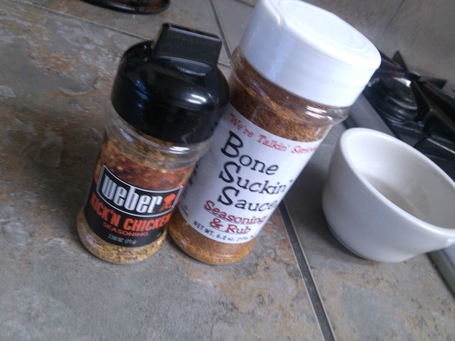 The former is a bit of a sweeter rub that probably fits pork better, but when cut with a bit of the spicier Weber seasoning it made for a nice contrast. The rub itself isn't as important as getting it applied, rubbed in and allowing the chicken to sit and absorb the flavor. Overnight is best, but I've gone only a few hours in a pinch. 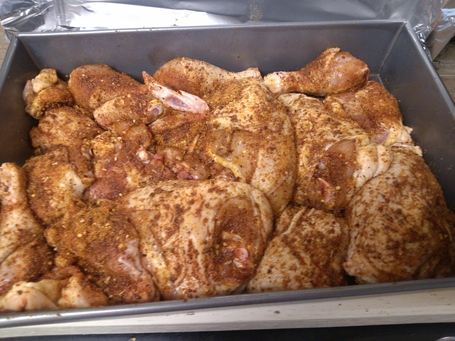 Obviously, you want to cook this chicken low and slow over charcoal. Maybe some wood chips if you're so inclined. I'm not a gas/charcoal zealot -- both have their uses -- but for chicken, you want some smoke.

Obviously that's going to take some time. Build your coals in your pit as best you feel (indirect heat, direct, do with what works for your pit), get ‘em lit and get the chicken on. As usual when you're grilling something, you don't want to mess with it too much -- flip it when you start to see some brown around the sides of the chicken. 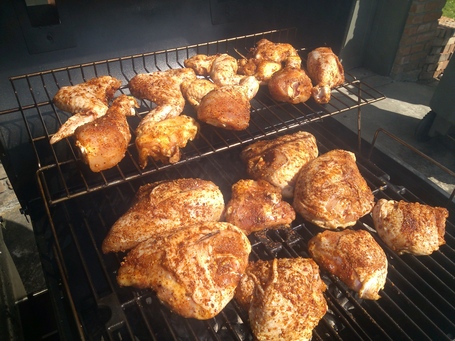 Once you have the chicken going, here is another tip. Take a stick, maybe a stick and a half of butter, melt it in a saucepan with some Cajun seasoning mixed in (if you need, you can add some olive or canola oil to make the mixture last). Once the chicken starts to get some color, baste the pieces every so often with the mixture. Keep this up until the skin on the chicken begins to char on both sides. It can be very easy to over-cook chicken and dry it out, especially if you're like me and still a bit inexperienced at working the grill. This not only will keep the meat moist, but also help reinforce the flavor. 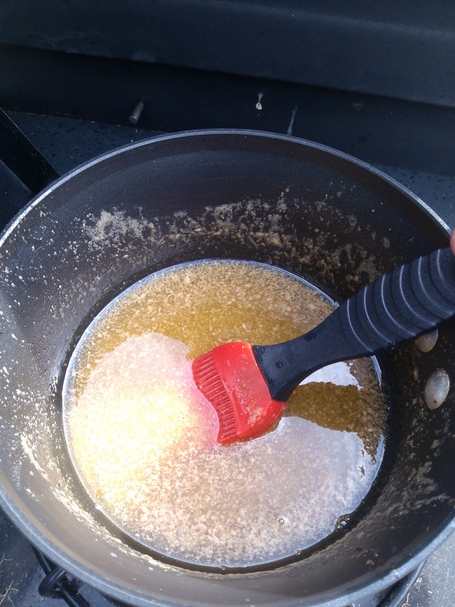 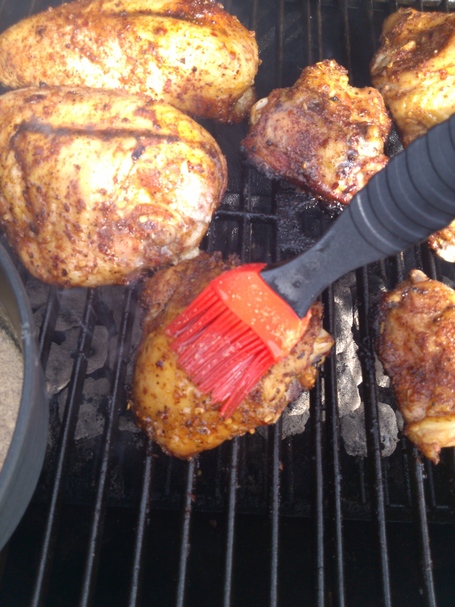 Once there's some good brown and a bit of char on the outside of the chicken, only then do you add the barbecue sauce. I like to mix up my sauces -- this smoked-onion chipotle concoction I made a few months back works well -- but feel free to go with what suits you. Honestly, I'm not a snob on store-bought brands, because you'll get much more flavor out of your rub than the sauce here.

Another trick I recommend, if you've used most of the butter mixture, is to just mix the sauce in the remnants in that sauce pan and heat it through. Once you've got a good brown char with some caramelization on the sauce, your meat should be good and cooked and you're ready to serve. 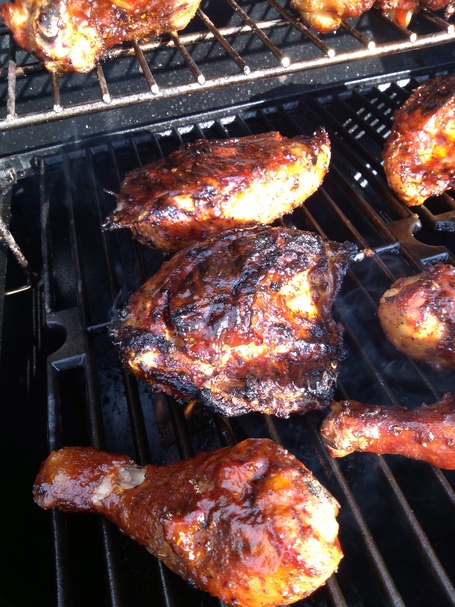 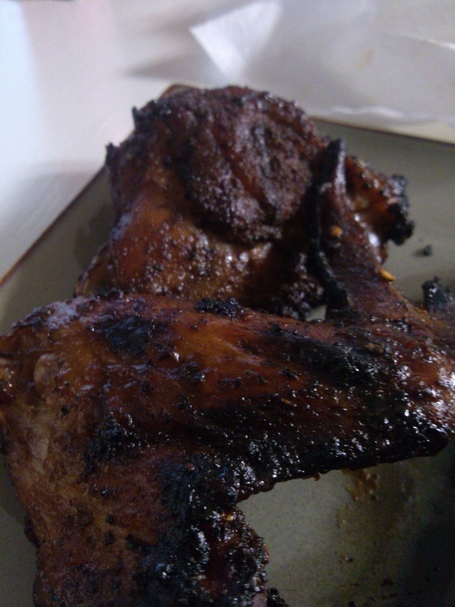