Here's a way-too-early look at the first depth chart of the Fall.

And with it we get a freshly minted depth chart:

So, any major surprises here? Let's go position by position. 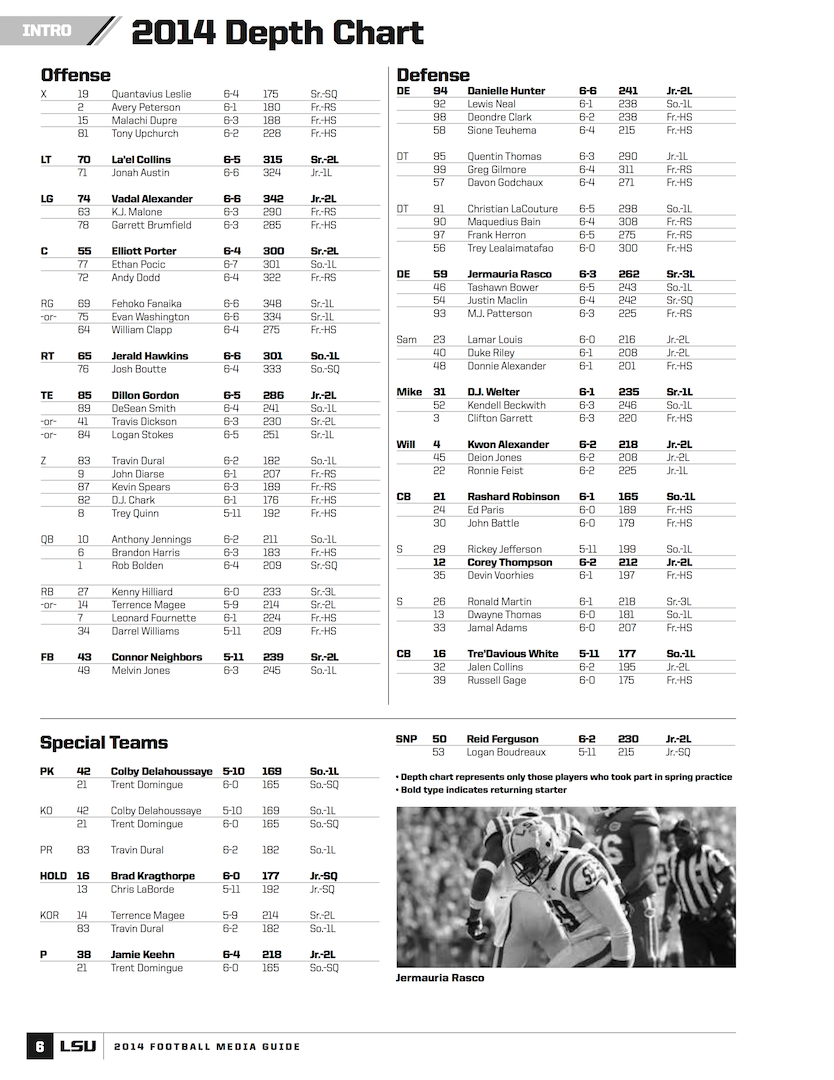 Anthony Jennings is still listed as the starter without any -OR- to indicate there's a pending timeshare. I'd say this is both strategic and a likely indication of what we will see come Wisconsin. If the coaches are considering rolling with Harris, there's no true benefit to broadcasting that information. That said, we still have a month of Fall practice left of competition, and my guess is they still trust Jennings more at this point. I expect Jennings to take the first snap under center for LSU this fall, but will not be surprised if this winds up as a timeshare, even within the Wisconsin game.

The only other thing worth noting is that Rob Bolden is listed, but news today states he's actually transferring from LSU.

Hilliard is listed as the starter, which seems somewhat surprising, though I'm not sure it means anything at all, especially since it's followed with -OR- Terrence Magee. Fournette and Williams follow he and Magee, so nothing of note here.

This is a bit surprising. Dural holds down the top spot at the Z (previously where Jarvis Landry was listed). The shocker is that John Diarse is listed as his backup there rather than the starter at the X spot (where Odell Beckham Jr. was last season). Instead, Quantavius Leslie is listed as the starter. I'm not sure if this truly means anything, but it's at least promising to see that Leslie has done enough to somewhat impress the coaches. He's got good size and athleticism, but has struggled catching the ball outside of a tremendous scrimmage performance. Could he emerge this season?

Avery Peterson, Malachi Dupre and Tony Upchurch are backups at the X. Kevin Spears, D.J. Chark and Trey Quinn are the remaining backups at the Z spot.

Dillon Gordon tops the list with Desean Smith listed right behind him, followed by -OR- Travis Dickson and -OR- Logan Stokes. Again, nothing truly noteworthy here. Gordon is primarily a blocker, but he's shown soft hands when given the chance and he's probably the team's best tight end right now.

The other three I see as package-dependent players. Smith provides some unique receiving threats. Stokes is the extra TE in big blocking sets. Dickson is a guy they can move all around the formation and use in a variety of different ways. The only interesting thing here is that Jacory Washington isn't listed.

La'el is the starter, obviously, but Jonah Austin is now listed as the backup rather than Evan Washington from last year.

Vadal is the starter, with K.J. Malone and Garrett Brumfield as the backups.

Porter is the starter and Ethan Pocic remains listed as the back-up. It will be interesting to see if they leave him there next year when Collins moves on. Andy Dodd is also your 3rd string center.

This should be one of the premier camp battles. Right now Fehoko Fanaika is listed atop but with the -OR- including Evan Washington. Will Clapp is listed as the 3rd string guard.

Jerald Hawkins is your incumbent, but Josh Boutte is now listed as a RT after spending time last year as left tackle and guard, I believe. Boutte makes sense at right tackle, as he's a tremendous run blocker.

Hunter is atop the left defensive side with his backup listed as Lewis Neal. Behind them, two true freshmen, Deondre Clark and Sione Teuhema.

The right-side end is Rasco, of course, backed up by Tashawn Bower, Justin Maclin and M.J. Patterson.

Your starters are Quentin Thomas and Christian Lacouture, as we all expected. Right now the primary two backups are Greg Gilmore and Maquedius Bain, which makes sense from an experience standpoint. The three true freshmen, Davon Godchaux, Frank Herron and Trey Lealaimatafao are after those two.

Travonte Valentine is not listed, but that's because he hasn't been officially admitted yet.

Kwon starts here as we found out in the Spring. Debo and Feist are listed as his backups.

D.J. Welter, whether you like it or not, remains atop the depth chart, with Kendell Beckwith his primary backup. Clifton Garrett is also included. It'll be interesting to see how many snaps Beckwith and Garrett see this fall.

Lamar Louis is the starter, with Duke Riley and Donnie Alexander behind him.

It's encouraging to see Rashard Robinson listed alongside Tre White as starters. Robinson battled some academic issues that forced him into a backup role this Spring. Looks like the message was received. The top two backups are Jalen Collins and, surprise, Ed Paris. In another surprise, they list John Battle as a corner, but we've seen them show a willingness to move players around in the CB and S positions, so that could change quickly. Battle is also listed at just 6'0", 170 pounds, much smaller than the 6'2", 180 pounds he was listed as a recruit.

Rickey Jefferson and Ronald Martin are the top two here. Corey Thompson is Jefferson's backup while Dwayne Thomas is listed as Martin's. Last season Thomas was listed as a backup CB, but he's obviously a hybrid player we like to utilize in blitz packages, etc. I don't think his position designation means all that much. He is this team's primary nickel. The other backups are Devin Voorhies and Jamal Adams.

This is one position I see shifting a lot as we near the fall. Jalen Mills isn't listed, due to his pending legal issue. If he's back on the team, it's likely he overtakes Ronald Martin's spot, I would think. Jamal Adams should also rise up the chart once we get rolling.

Delahoussaye listed again. Should be interesting to see if Cameron Gamble can unseat, though he's not currently listed. Trent Domingue is the backup at each.

Travin Dural. Not that I don't think Dural can do the job, but I expect this to change in fall practice once they see what the freshmen can do.

Jamie Keehn. Domingue is the backup P too.

Reid Ferguson is holding this down until his younger brother shows up.

Overall, it's way too early to make any firm judgments with a month of practice left. This is mostly the status quo, but it's interesting to see how the coaches have the players slotted at this point. I think I'm most surprised to see Quantavius Leslie atop one of the receiver spots, considering how he's failed to impress. John Diarse received some positive buzz this Spring, so I thought for sure he'd be the other starter out wide.

Anything surprising to you guys? Who do you want to emerge from the position battles?

PodKATT: Some additional nuggets from the media guide, which should be generally available soon

The new Tiger head is here to stay. And I’m….glad actually. pic.twitter.com/cxAgaG6gT2

Media guide is mostly the same as last year’s (with updated stats and rosters of course). Noticed a sweet "DBU" logo pic.twitter.com/VyPBhwhJFg