Questions I would have asked at Media Days - Day 1

Because someone needs to do the dirty work.

Share All sharing options for: Questions I would have asked at Media Days - Day 1

Hoover, Alabama in mid-July is a magical place. Ah, summer, when a man's focus begins turning to college football and Fall Saturdays. The beginning of this turn occurs at the Southeastern Conference's Media Days, an event described by a college football writer (I believe it was Andy Staples) as "a celebration of itself."

Regardless of who said it, they were right. Fans and media alike gather to hear coaches and players speak on a wide range topics, mostly themselves. The media can also poke and prod players and coaches with any lingering questions they may have. Several questions are attempts to grow the collective knowledge base of college football, while others inevitably include the phrase "talk about..."Regardless of how they word their questions, members of the Fourth Estate are qualified in their field and typically inquire in a thoughtful manner. Despite Media Days' reputation for fluff and hot air, a nugget of knowledge may be present in each session. Sometimes all it takes the right combination of wording and tone to coax it out.

I, however, am not qualified at all. I seek no useful knowledge. The following are a few of the questions I would have asked the speakers at Day 1 of SEC Media Days. 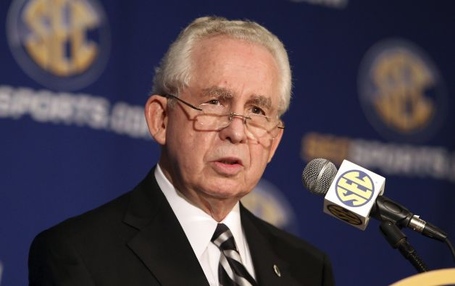 "Is there any truth to the rumor that you've accepted a bid from Qatar to host the SEC Championship Game from 2018 to 2040?"

"Do you attribute your skin's healthy glow to bathing in a combination of Texas Pete Hot Sauce, Dr. Pepper, and used Golden Flake frying oil?"

"Would you eat ice cream out of the new College Football Playoff trophy?"

"If you kill Jim Delany with a hammer and stake through the heart, does the SEC hold dominion over the Big Ten for all eternity?" 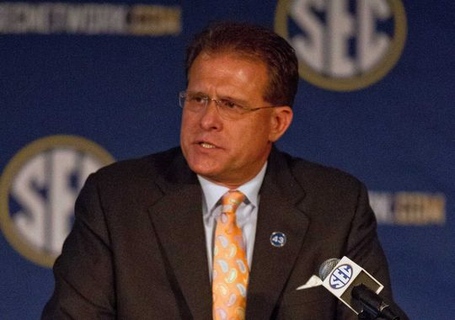 "Were you disappointed when police cited Nick Marshall for marijuana possession instead of a controlled substance more appropriate for your offense, like Adderall or Amphetamine?"

"Did you really find Gene Chizik's teeth in the back pocket of Pat Dye's pants?" 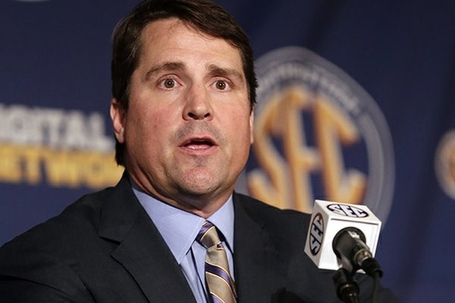 "You've acknowledged that you're on the hot seat heading into this season. Is there anything to the rumors that you've considered help from someone who's used to being in that situation?"

"Have you been looking at vacation destinations for this coming November? Just like...you know...just in case?"

"Does Kurt Roper have any goals for the offense heading into the season other than ‘not falling down and flailing wildly after every snap'?"

"Have you noticed that your forehead has been bleeding for the last 15 minutes?" 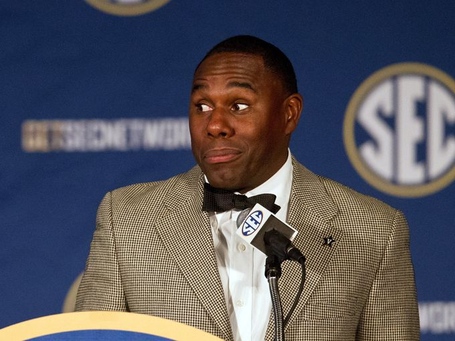 "Been watching a lot of ‘Doctor Who' lately?"

"Is there any truth to the rumor that Vanderbilt's head coaching position will soon be endowed as the ‘Robbie Caldwell Director of Football'?"