Questions I would have asked at SEC Media Days - Day 3

There's a reason I'm not a credentialed media member.

Share All sharing options for: Questions I would have asked at SEC Media Days - Day 3

We're on the final day of SEC Media Days. Day 3 was a joy to observe between the lovable Les Miles, the heelish Bret Bielema, and the er...present and breathing Gary Pinkel. Head of officiating Steve Shaw also fielded questions, and everyone got to know a little bit more about the new College Football Playoff! However, several questions still went unanswered. Below are a few of the questions I would have asked the coaches on Day 3 of SEC Media Days. 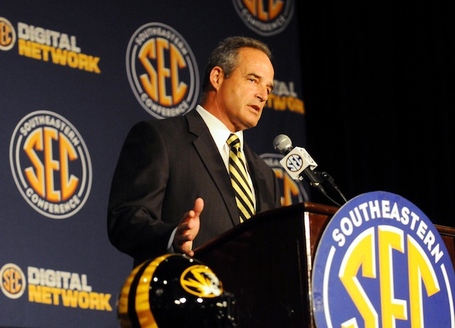 "After seeing the bravery of your former player Michael Sam in this past year, have you been inspired to come out publicly and say that you're the last living Cro-Magnon human?

"How will it feel to be Mark Stoops' first signature win later on this season?"

"How many 'thank you' cards did you get from LSU fans after the Big 12 Championship Game in 2007?"

"Hey coach, we're going to Applebee's for dinner later. Can you drive?" 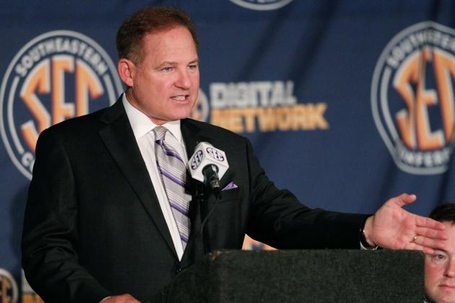 "Do you believe that time is a construction of man, that we are only hindered by the rules that we set for ourselves, and that men can transcend time and the very fabric of reality? It is? They can? You learned that at Michigan?"

"You've lost a lot of underclassmen to the NFL Draft in recent years. Could you please hold this bat and beat this dead horse for me please?"

"Leonard Fournette is the most touted running back to grace LSU's campus in quite some time. In your professional opinion, how many sternums do you think he'll crack with his helmet over the course of the 2014 season?"

"Can you translate for Brady Hoke?" 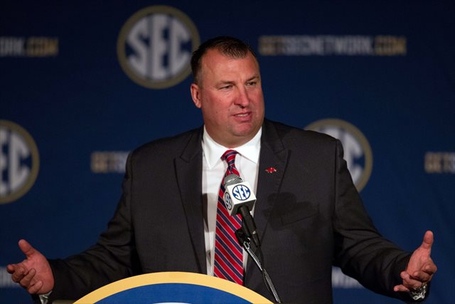 "Am I speaking too fast? Should I slow down? You could get hurt after all."

"At the dawn of your second year, how do you plan on filling the void in Arkansas' program left by Razorback coaching legend John L. Smith?"

"Which Fayetteville Waffle House do you prefer? Don't look at me like that, we know you eat at both daily."