For all the stereotypes, we haven't done a ton of frying stuff on here. A little fish. Some soft-shelled crabs. Miscellaneous. To be honest, I don't have the world's greatest diet anyway, so I try to avoid frying things too often. Besides that, it's a pain. Who wants their whole house to smell like grease?

Still, Dan Rubenstein's Easy Call SEC Preview over at the Mothership inspired me to try something that I'm not exactly making from scratch, and that's frying my own chicken.

Obviously, frying a whole chicken isn't something you can just throw together. But, if I was going to do this, I was going to do it right, which means brining the chicken ahead of time. Brining chicken is a simple, albeit time-consuming way to marinate your bird and ensure that the meat will stay nice and juicy and not dry out in the cooking process.

1 fryer chicken, cut into serving pieces
Vegetable or peanut oil for frying
2 eggs
1 cup milk (I also threw in about a third of a cup of half-and-half, because I had it to use)
4-5 cups seasoned flour (as you like)

1.       We'll start with the brine, which will need to take place 12-24 hours in advance. Bring your water to a boil, then stir in the kosher salt and brown sugar. If you don't have kosher salt handy, you can use a full cup of table salt. Once the salt and sugar are dissolved, add the thyme, rosemary, chili flakes and granulated garlic. Stir well until solution is well combined (it's going to smell pretty awesome), then kill the heat. 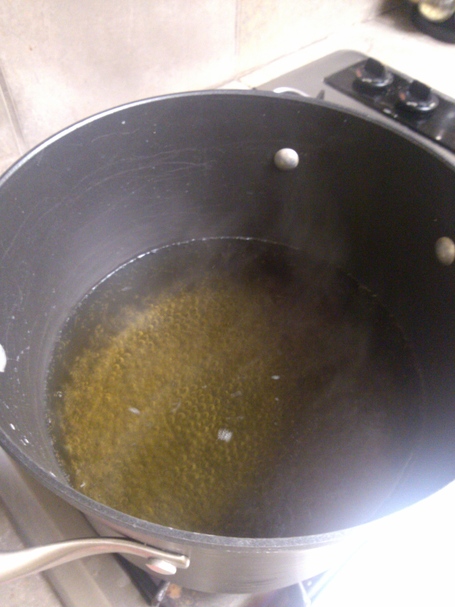 2.       Now, this isn't going to be enough brine for all of the chicken pieces on its own, which brings us to a little trick to get this over your bird without cooking it. Line whatever you're going to marinate the chicken in (I used Tupperware) with ice. That way when you pour in the brine, you'll dilute it enough to make enough liquid to cover the chicken, plus cool it down so that it won't cook the meat. Make sure you have enough liquid to cover, place the chicken (make sure you've rinsed the pieces and patted them dry on paper towels beforehand) in, seal tight and put it in the fridge. This sat overnight for me until the next afternoon when it was time to cook. 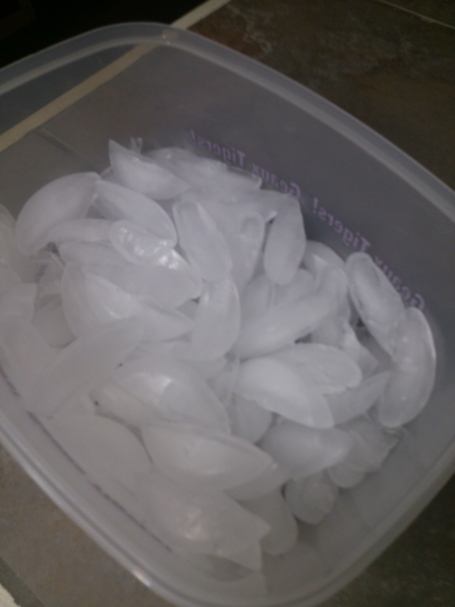 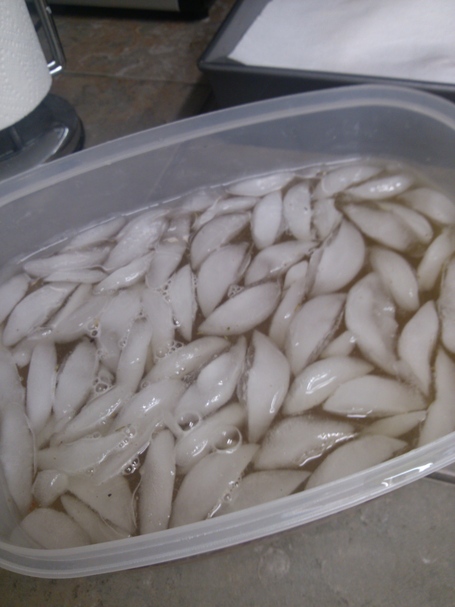 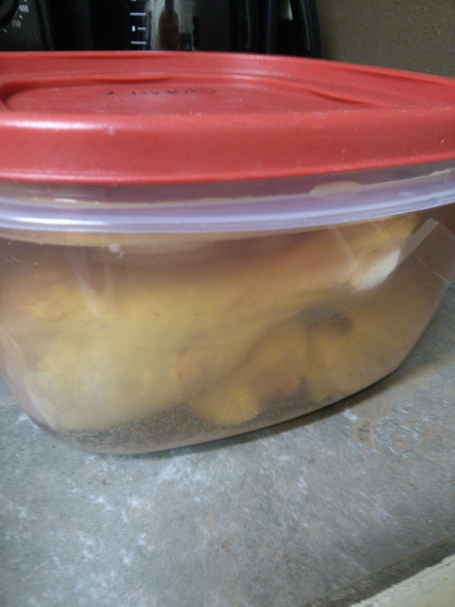 3.       Upon removing the chicken from the brine, rinse it again under some cold water, to make sure any of the aromatics don't stick to the meat, then pat dry on paper towels. You'll want to make sure it's good and dry.

4.       A huge key to frying chicken, or anything else really, is to make sure you have your oil at a consistent, high temperature. 360 degrees is a good baseline. Some recommend using slightly lower temperature, but given that this was my first time and some of these chicken pieces were on the larger side, I went with the higher temperature to make sure the meat cooked through.

5.       Heat the oil on medium-high to high heat (I used a burner on my gas grill, because again, frying can stink up your house). Here's an old tip on how to tell if your grease is hot enough -- toss an ordinary kitchen match in while the oil is still cold. Once the oil hits about 360 or so, the match head will ignite briefly and fizzle out. So you'll know the oil is ready. 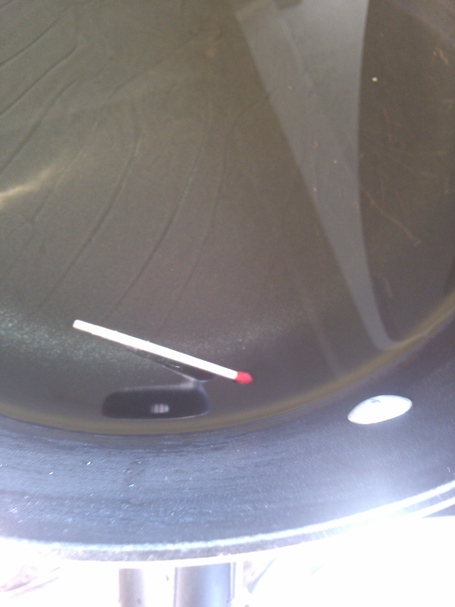 6.       Time to batter the chicken. I used some all-purpose flour, seasoned with some Cajun seasoning. You'll want an even coat of batter that can form a seal, so the oil doesn't penetrate into the meat. Easy way to do this is to dip the chicken lightly in flour first, then your egg wash, then back into the flour. My egg wash was a little thick because I added some half-and-half that I happened to have around. It makes for a thicker batter, but go with what works for you. 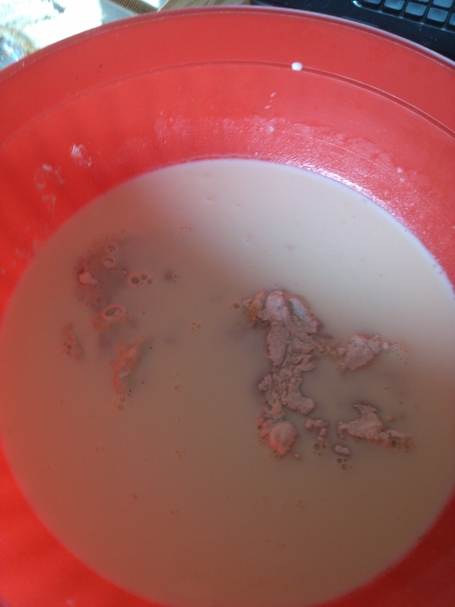 7.       Once you have a chicken piece battered, you'll want to go right into the grease. I suggest starting with the biggest pieces of chicken first and working your way down. Do not crowd -- in my case I went with no more than two pieces at a time until I got down to the wings. 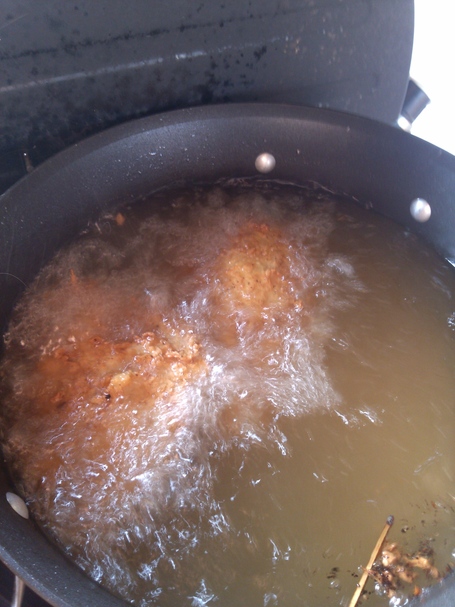 8.       Fry your chicken until it's well-browned and the meat is cooked through. This will take a couple of minutes. Drain it on paper towels and then serve. A whole chicken should feed at least 3-4 adults. 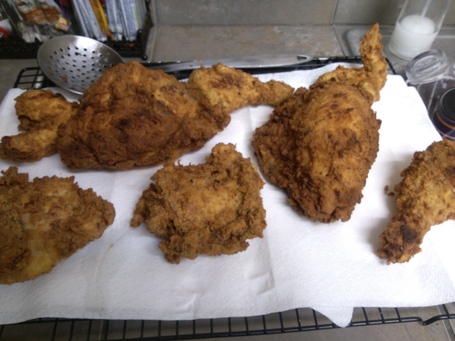 Overall, this came out pretty good. The brining absolutely made a difference and produced juicy, flavorful meat that didn't dry out -- which can happen with frying.