A recap of some of the major news and notes to trickle out from LSU's annual fan day.

During Les Miles' press conference he noted that Frank Herron is now the starting DT opposite Christian LaCouture due to the Quentin Thomas injury (more on this later). The fact that Miles felt inclined to openly name the RS Fr. the starter is an interesting piece of news, since it was widely considered to be an open competition between Herron, and fellow RS Fr. Greg Gilmore and Maquedius Bain.

Herron came to LSU a 275-pound defensive end with good pass-rushing skills and athleticism. Similar to Michael Brockers, LSU opted to add some additional weight to him and shift him down inside. Herron doesn't profile as the same type of player, but he should give LSU some good interior pass rush. Herron lists at 278, but the scuttle is that he's actually heavier right now.

However, don't put this in stone yet. John Chavis and Brick Haley were less inclined to name Herron the heir apparent.

The larger point here is that there is playing time to be had, and regardless of who gets the starting nod, expect a heavy rotation of guys including the aforementioned Herron, Gilmore and Bain, as well as the potential for time from true freshman Davon Godchaux.

Quentin Thomas Injury Not as Severe As Initially Feared?

Reports began to trickle in that Quentin Thomas may be eyeing a return in 2014. To the surprised of many, he showed up at Fan Day.

Think Miles just mentioned that Lewis Neal has repped some in at DT since Thomas injury. Neal listed at 6-1, 255. #LSU

Miles also sang his praises, calling him a "player you haven't heard much of that will play a lot this year." Neal came to LSU undersized but with a very refined skillset on the D-line. Due to his size, I projected he'd be a pass rush specialist rather than a consistent, every down defender. The fact that he's shifting inside is interesting. Neal weighs just 255, extremely light for tackle, but his quickness could be a major asset there. The fact that he saw the field last year and is being singled out by Miles here means the coaches like him quite a bit. I'm very interested to see how this move works out.

Considering this has only been a week, this isn't remotely surprising. Miles has no real reason to declare a starter at this time, especially considering we are likely looking at some type of a time share this season. Cameron himself stated the final decision rests with Les Miles.

There's no major takeaways here, but don't expect there to be any news of a starter soon. In fact, I'd be surprised if we heard anything outside of a week away from Wisconsin.

In news that's sure to make the humanoids hearts' melt, Kendell Beckwith is pushing D.J. Welter hard for playing time. All coaches acknowledged they expected Beckwith to contribute heavily this year.

Miles mentioned a "battle" at middle linebacker between Beckwith and Welter

Beckwith is still finding his way at linebacker, but I don't think anyone would be surprised if he overtook Welter as the season wears on.

More surprising is the news that Ethan Pocic is really pushing Elliott Porter for 1st team snaps at center. In fact, Miles even went as far to state:

Miles on Beckwith and Pocic, backups for now: "I'd not be surprised that Ethan Pocic start a number of games." #LSU

It's quite interesting that Pocic may ouster Porter with a vacant RG spot still up for competition. Pocic is likely one of the five most talented offensive linemen on this team already, and Miles stated he believes his best position is center, which is an interesting landing spot for a player standing 6'6"-6'7". Porter was a solid, dependable center last year, but this may just be a case of bigger, stronger, better winning out. It should be interesting to see how they manage Pocic's playing time.

Miles also noted that fans shouldn't be surprised at the number of young players that see the field this fall. This falls right in low with our perceptions of the 2014 signing class, both in their abilities and maturity. He specifically mentioned Trey Quinn as one who will be involved. Cam Cameron went further stating most of these guys are who we thought they were and some "a little more."

This is as ready and focused of a group of freshman I've seen since I started closely following recruiting back in 2004.  Should be fun to see all these young guys work their way into the lineup. 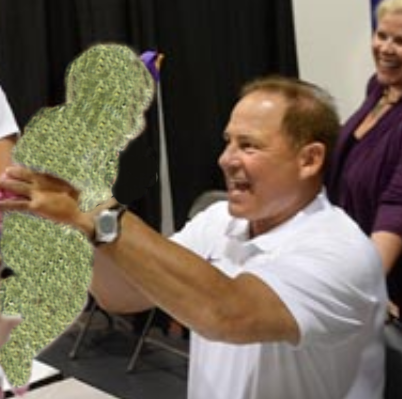