LSU vs. Wisconsin: What to Watch For

Tiger Football is BACK baby! Here's your comprehensive breakdown of Saturday night's opener in Houston.

Share All sharing options for: LSU vs. Wisconsin: What to Watch For

Anyways, here's your comprehensive preview of themes, strategies and what you can expect to see out of the Tigers and the Badgers on Saturday night in Death Valley um...Houston.

It shouldn't have taken 40 years for these two programs to meet up again in the regular season.

Wisconsin and LSU are programs that seem made for each other. Near-mirror images of each other on and off the field. While LSU has been built this century largely on a slew of stud defensive linemen, the bedrock of the Badger program is the idea that they're going to have the biggest baddest offensive line in the country.

Both programs have been built on words like "power" and "counter." On guards that pull. Fullbacks that kick out defensive ends and linebackers. Tight ends that block first and foremost. Wisconsin will line up in the I-formation, with two tight ends, even occasionally in a full-house look with two blocking backs plus the tailback.

Even off the field, both fan bases are known for their love of food and drink and um...a bit of color.

On top of that, both squads are ranked in the teens pre-season and coming off 10-win seasons. They return big, strong, experienced offensive lines, with reloading passing attacks that feature new quarterbacks (although Wisconsin's inexperience there is by choice) AND receivers.

However, one area where Wisconsin is decidedly greener than the Tigers is on defense. The Badgers are replacing their entire front seven, a tough prospect versus LSU's outstanding offensive front.

Defensive coordinator Dave Aranda has shifted the Badgers away from Bret Bielema's 4-3 to a true 3-4. Last year that unit featured a pretty strong group of linebackers led by All-American Chris Borland, but this year's group appears a little more undersized. Reports have been that Aranda will try to mix things up a bit with some extra defensive back looks and a little more aggression. Watch for a few "psycho" looks with the entire front standing up in some third-and-long situations as well. Iowa had some success with that look in the Outback Bowl, so identifying the rush and adjusting protection will be huge for LSU's inexperienced quarterbacks as well as the center, be it Elliot Porter OR Ethan Pocic.

Speaking of those quarterbacks, my best guess is that Anthony Jennings will get the start. He's got that slight experience edge, and the general vibe has been that he's a little steadier and consistent, particularly in terms of managing the game. But Brandon Harris will certainly play one way or another, from here on out. We'll get into this later on, but this competition isn't likely to be settled quickly.

Aranda liked to stay in his base front a lot last year, even versus spread teams, so watch to see if LSU tries to spread things out a bit early on to create some mismatches. The Badgers return cornerbacks Darius Hillary and Sojourn Shelton, but they were absolutely shelled at times by the spread teams on the 2013 schedule like Arizona State, Ohio State, Penn State and South Carolina.

If Jennings/Harris can keep the chains moving and avoid turnovers, La'el Collins and company should be able to create some room for the backs. I mean, it's not like we're looking forward to seeing any of the tailbacks in particular, are we? #BugaNation

Look for LSU to try and establish the short game early with the backs and tight ends to try and loosen this front up, and get the quarterbacks in rhythm. Then take some shots down the field off of play-action. That's likely going to be the offensive recipe all year long.

The additions Andersen and OC Andy Ludwig have brought to this offense combine the pressure those big, physical offensive lines put on a defensive front with misdirection that can get a back seven crossed up. It's the perfect fit for the types of backs on this team right now -- speedy, one-cut slashers, as opposed to the big, burly, bowling-ball types we're used to seeing out of the Badgers. Miss a gap, and Melvin Gordon is sprinting right into the open field.

Gordon is a Heisman candidate entering this season for good reason. The 210-pound junior rushed for more than 1,600 yards last season despite coming in second to senior James White in carries. He reminds me somewhat of LaMichael James, despite having about 20 pounds on him. White is a lanky runner with great acceleration. He runs with a low pad level, and if the defense misses him, he WILL pick up big yardage. Last season, as much damage as Gordon did on Wisconsin's basics like power and counter, he was deadly on one of the aforementioned adjustments to the Wisconsin offense that has come with the Andersen Era: the jet sweep.

(HT to Jim Light Football, which wrote a fantastically extensive piece on the play, and Land Grant Holy Land for this breakdown.)

I don't have any metrics on how many times Sconnie ran a play like this a game last season, but through film study it's clear they committed to using this action as a constraint to so much of what they did. Land Grant Holy Land wrote about how the Badgers incorporated the motion in with their inside-zone play. 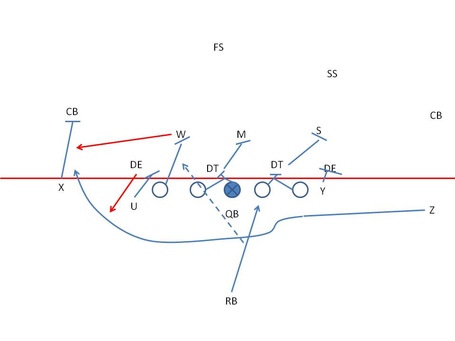 It's a beautifully simple addition to play that virtually every rushing offense has in its arsenal. Wisconsin splits out wide, runs across the formation and the quarterback fakes or hands it off to the player on the sweep, or to the set back on the zone play. It's a perfect constraint, because if after faking it four or five times, an offensive coordinator can call the sweep handoff, the linebackers or safeties look at that inside handoff for an extra second and boom, there's Gordon on the edge. Don't forget about backup Corey Clement either, who averaged 8 yards per carry last season and provides another speedy option for Ludwig.

What's more, that motion also sets up the offense for play-action, and the sweep motion can provide a perfect waggle play for the quarterback to get the ball into the hands of a very speedy player in the flat. Wisconsin will also use similar motions and plays with receivers and tight ends.

Which brings me to the Badgers' passing game, which frankly, looks a lot like the passing game I've speculated LSU to have this season. Heavy on the play-action, waggles, bootlegs and the like. Lots of short throws to the fullbacks, tight ends and running backs to set up throws down the field later in games. It's allowed Wisconsin to transition from the Scott Tolziens of the world to Joel Stave last season with a solid level of competency.

Now, that's where Andersen's reported decision to bench Stave in favor or Tanner McEvoy is so interesting. He's a former South Carolina signee that has seen some time at receiver and safety, so obviously he's a pretty good athlete for a 6-6, 220-pounder. He even saw time in the defensive backfield last year before moving back to QB in the spring. McEvoy's presence makes me wonder if we'll see a few more spread looks to take advantage of that athleticism, with some option thrown in.

Either way, look for Stave to get back in if the offense struggles a bit. Watch for some Wildcat looks as well with Gordon or Clement taking a direct snap.

Between Wisconsin's running game and the new receivers they're breaking in to go with McEvoy (the Badgers replace four of their top five pass-catchers from 2013), the job here's going to be pretty basic for John Chavis & Co. Bring a safety down into the box to stop the run with numbers, and man up outside at the corners.

In some ways, it's going to be similar to how LSU's defense attacked the Oregon running game in 2011. Up front, beating the reach block is going to be huge (link refers to a long breakdown I did of the season opener versus the Ducks). Which all goes back to something I talked about in the defensive line preview: hands. Getting off the snap, getting hands on a blocker first, preferably inside in that breastplate area, and forcing him backwards. It's not so much about flying into the backfield as it is getting under the pads of the offensive lineman and forcing him back, while maintaining proper leverage towards your gap assignment.

Meanwhile, LSU's outside linebackers, safeties and cornerbacks will need to make sure they maintain pressure on the C/D gaps outside of the tackles and tight ends when Wisky runs that jet sweep action.  Chavis will have to find some ways to mix up how he attacks that play. Some teams had success crashing or blitzing cornerbacks, others rolling their safeties down. Speedy outside linebackers like a Kwon Alexander or a Lamar Louis could also loop around a defensive line slant, almost in the way a linebacker would scrape-exchange to defend a zone read play.

But in all of these examples, the real pressure is put on the defensive backs handling the receivers outside. They have to be physical enough to crash versus the run but still be ready to bail deep in pass situations.

The depth chart LSU released on Monday? Pay that very little mind. We're going to see a lot of things on Saturday night that are different from what we expect. Ethan Pocic will probably work somewhere in the starting five on the offensive line, be it center or at right guard. Kendell Beckwith will get some playing time at one of the linebacker spots, as will Deion Jones. Who knows what the safety rotation will look like -- or if Jalen Mills will miss some time with his arrest this summer. Quantavius Leslie is almost certainly NOT starting at receiver, and if he does, it's in the most literal "out there for the first play" fashion.

I feel like I say this every year, but I also feel like a lot of fans are always surprised every year when the season-opening game has its sloppy, frustrating moments.

Every year, it's like the anticipation just builds and builds and builds and then there's disappointment when game one isn't the finished product that we all want it to be, but that's just not how football works. Nor should you want it. Who wants to see their team peak in game one?

That's even truer for a team like this LSU squad. With so many, not just young players, but freshmen in key positions, this is a team that, ideally, gets better as the season goes on. What you see tonight may not look like what you see in November or in the postseason. Fans will have their frustration over who does or doesn't get the ball, especially with two quarterbacks in competition still and a running back that we're all waiting to see explode on to the college football scene.

Expect hiccups. Hell, not even that, expect Wisconsin to contribute to some of them. The Badgers are a ranked opponent that is expected by many to compete for their conference's title, and they're going to show up and they're going to make some plays, regardless of how this game turns out.

Let's all hope that the Tigers try harder and bring this one home. But either way, LSU football is back, and let's all get ready to enjoy the hell out of these next four months.