Johnny Robinson and the Path to Canton

His success at LSU and in professional football on both offense and defense is undeniable, so why isn't former LSU All-SEC tailback and Kansas City Chiefs All-Pro safety Johnny Robinson in the Pro Football Hall of Fame?

Share All sharing options for: Johnny Robinson and the Path to Canton

A few weeks ago during our weekly pre-trivia beer at The Chimes, our very own Billy Gomila pitched a story idea to me that we could run during the doldrums of the offseason. He mentioned that his younger brother once asked him why he thought the Pro Football Hall of Fame - or those responsible for it, anyway - never enshrined LSU's Johnny Robinson. I showed my comparative dearth of LSU and professional football knowledge by responding with a befuddled "uh...why?"

I had heard of Johnny Robinson, at least in passing, and knew that he was part of Paul Dietzel's 1958 Southeastern Conference and National Championship squad. However, it was clear that I lacked the knowledge to write his biography. I knew little of his exploits as a tailback on LSU's 1958 and 1959 squads, and nothing of his professional career. It was clear that I had some work to do.

Billy told me to dig deeper into who Johnny Robinson was, what he accomplished during his time playing football, and to ponder why he is not enshrined in Canton, OH. With the Pro Football Hall of Fame's induction weekend just behind us, it is an especially timely question to ask. This is the culmination of those efforts. Hopefully I do Mr. Robinson and his career justice.

The LSU Years and the Two-Headed Beast

A native of Delhi, LA, Robinson logged a total of 1316 yards from scrimmage as a running back during his LSU career, along with twelve touchdowns. His personal success on the field very much mirrors the Tigers' success in the 1957-1959 seasons - Robinson's career highs in all offensive categories (save receptions and two pass attempts) came during the aforementioned 1958 season, while he hardly saw the field during the 1957 season. Below are his career stats at LSU, courtesy of sports-reference.com (click to embiggen).

A few numbers immediately jump out when looking at Robinson's stats. Perhaps the first is how he touched the ball 100 times in both 1958 and 1959, just under ten attempts per game (both teams played eleven games). He made the most of his touches, gaining no less 5.0 yards per attempt, even during his sample-limited 1957 season of 26 touches. Robinson had to compete for chances in Paul Dietzel's innovative platoon system, where he split carries on the White Team with one Billy Cannon. His 100 attempts in 1958 and 1959 were second only to Cannon's 124 and 150 in each year. 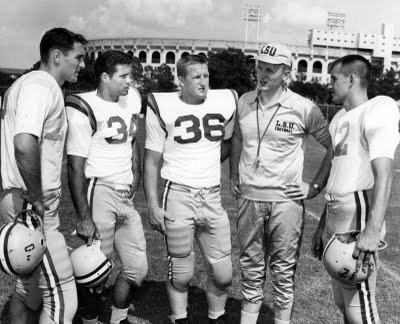 In 1958, the Robinson-Cannon combination accounted for *1533 yards and 16 touchdowns, roughly 41-percent of LSU's trips to the end zone in their undefeated season. The 1959 season saw the duo took a step back, accounting for "only" 1256 yards from scrimmage and half of LSU's touchdowns en route to a 9-2 mark and Sugar Bowl loss to Ole Miss. The Robinson-Cannon duo shouldered the load for the Tigers in both seasons, with Cannon typically getting the spotlight at Robinson's expense.

*Note: I had initially wanted to show the Robinson and Cannon's contributions as a percentage of LSU's total offense in 1958 and 1959, but could not find end-of-season statistics, only numbers from which I could draw reasonable conclusions. I chose to leave them out as a result

That is not to say that Robinson did not enjoy better weeks than his counterpart, and it is definitely not to say that Robinson never stole the show. In 1958, LSU found itself only up a touchdown against during its season finale against Tulane, despite Cannon running for 41 yards in the first half. After the break Robinson caught fire, scampering for four touchdowns all on plays of 23 yards or more, en route to a 62-0 LSU thrashing of the Green Wave. United Press International named the man from Delhi their Back of the Week for scoring touchdowns via run, reception, and punt return, helping launch the Tigers to a #1 overall ranking in the polls, a Sugar Bowl invite, and their first (claimed) National Championship. Despite being in Cannon's shadow, Robinson garnered First Team All-SEC Honors in 1958 and was named Second Team All-SEC in 1959.

Professional Football and a Revelation at Safety

Robinson exhausted his college eligibility after the 1959 season, along with teammate Billy Cannon. Once again, Cannon's star would shine over Robinson's as both men entered the ranks of professional football. In one of the stranger notes of LSU football history, the Tigers had two of the first three overall draft picks in the 1960 National Football League Draft: the Los Angeles Rams picked Cannon first overall, while the Detroit Lions selected Johnny Robinson third overall.

Neither man signed with the NFL clubs that owned their rights, along with several of the other first round picks. In what can only be described as a coup, Robinson, Cannon, and several other new professionals opted for the upstart American Football League, a new league formed by former minority owners of NFL clubs and new owners whom the NFL jilted during their expansion process. Robinson landed with the Dallas Texans in 1960 as a tailback. His location, both in terms of geography and position on the field, would change dramatically in the coming years. 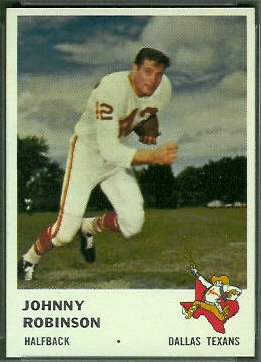 Robinson found success as a halfback under head coach Hank Stram in his first two seasons (1960-61), netting 1886 offensive yards while scoring 15 touchdowns. In the buildup to the 1962 season, Stram made a number of personnel moves, among them flipping Robinson from the offensive to the defensive backfield. Perhaps he knew something the rest of the football world did not.  Robinson and the 1962 Dallas Texans defense gave up less than 17 points per game. He contributed heavily, snatching six interceptions in twelve games (including two in the AFL Championship Game against Billy Cannon's Houston Oilers) en route to an AFL title. It would be the first of three AFL Championships Robinson would enjoy during his time in professional football. The Dallas Texans franchise moved to Kansas City the next season (1963), where Robinson would have his best days and end his career.

While he won his first AFL Championship while playing in Dallas, Johnny Robinson would become an outright terror for AFL offenses while playing for the Kansas City Chiefs. His career numbers at safety speak for themselves.

Robinson led the AFL in interceptions twice (1966, 1970), notching ten in both seasons. He never had fewer than two picks in a season, a total that came during the 1964 season in which he appeared only in ten games. His 57 career interceptions still rank twelfth all-time and third in AFL history, at a position he never played until reaching professional football, over the course of ten of his twelve professional seasons (5.7 interceptions per season). By this metric, football essayist Thomas Ferry defines Robinson as "the third most effective pass interceptor of all time," behind Bobby Boyd (Baltimore Colts) and Jack Christiansen (Detroit Lions). The Texans/Chiefs had a 35-1-1 record when Robinson recorded an interception. He missed only four games in his entire career. He saw more career wins than any other player in the ten year history of the AFL. Former San Diego Chargers wide receiver and Pro Football Hall of Fame inductee Lance Alworth called Robinson the "best defensive back I ever played against."

The narrative is not merely locked in the numbers either. During Super Bowl IV in 1969 Robinson started for the Chiefs, sniping Minnesota Vikings quarterback Joe Kapp for one interception and recovering a fumble. The latter play led to this image, one of the most notable from the early Super Bowls. 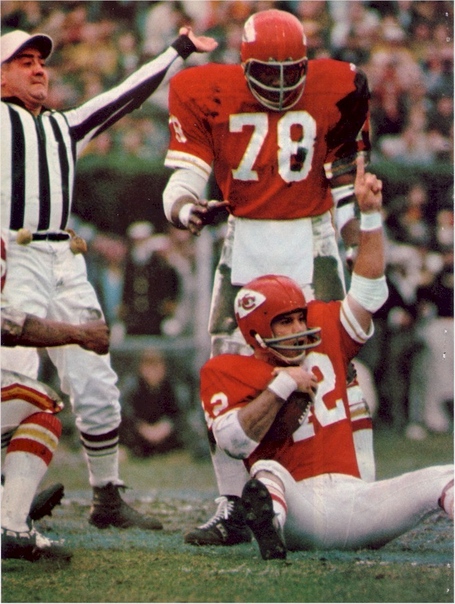 He played the entire game with three broken ribs. The Chiefs beat the Vikings 23-7 and claimed their first World Championship, the last before the NFL-AFL merger took effect the next season.

Robinson would play two more seasons in professional football, retiring in 1972. He held various coaching positions for professional and college teams before opening a boys' home in Monroe that he still operates to this day. 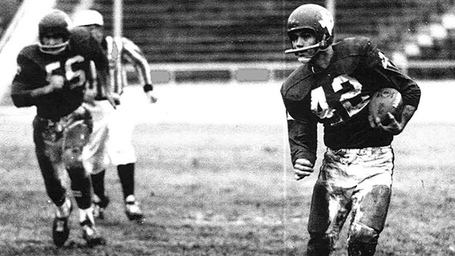 The Legacy and the Road to Canton 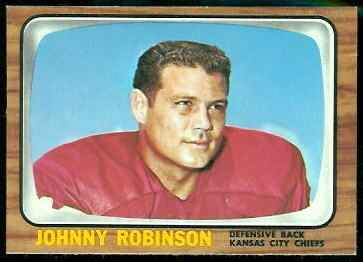 Pro Football Reference lists Robinson's career value as being among the Top 200 players of all time, and that his career draws comparisons to modern defensive backs like Charles Woodson and Ed Reed. PFR also mentions his ten year stint at safety as being comparable to names like Brian Dawkins and Aeneas Williams. Williams is another Louisiana product and a 2014 inductee to Canton. Dawkins is currently ineligible, though his career speaks for itself, and he is a likely selection in 2017 when his eligibility takes effect.

So why is Johnny Robinson not in the Pro Football Hall of Fame? The question is a puzzling one to ask, and researching this article showed me that Billy and I were not the first people to ask it. Several articles regard Johnny Robinson as one of the Pro Football Hall of Fame's greatest snubs. That is not to say he never came close. Robinson was a finalist from 1980-83 and again in 1985 and 1986. Some of the background I read for this article cites a bias against former AFL players, though there is no way of knowing that for sure. Regardless, Robinson is not in the Hall, though technically he is still eligible, as there is not a limit of times a player can be on the ballot without being inducted.

Johnny Robinson's path to Canton is only more difficult now. First he must be nominated by Canton's Senior Committee, a body which debates players whose careers ended 25 or more years ago, and be one of the two candidates they nominate to be considered for election with Modern Era players. If he reaches that stage, Robinson would have to garner 80-percent or more of the vote by the general Selection Committee.

While not completely impossible, Robinson's road into the Pro Football Hall of Fame is not an easy one, though his success in the professional ranks is undeniable. Before writing this article I had no idea what Robinson had accomplished during his career. Evidence I found in researching this article, both statistical and anecdotal, gives the impression that Robinson should be an easy choice for the Pro Football Hall of Fame's Selection Committee. If Johnny Robinson does not look like a Hall of Fame Player, then I do not know what one looks like.

While we cannot have any direct effect on Robinson being inducted to the Hall of Fame, we can at least remember a man who was one of the most versatile players in LSU football and professional football history. While he may not be enshrined in Canton, we can still ensure that his legacy and career will live on.