Santa Fe Brewing out of (guess where!) New Mexico, have slowly been working their way into the Louisiana market. I was able to try a few of their wares at the Baton Rouge Beer Fest last spring but I...um...didn't really write anything down for a review.

Anyways, I DO remember very much enjoying their Imperial Java Stout, so after a long day at work, I picked some up on the way home:

2007 Best of the Rockies/Southwest, US Beer Tasting Championship

You can find this one in six-pack cans. As an "imperial" stout, it has a healthy 8 percent alcohol by volume. Whether that means you can session it would be...up to you. 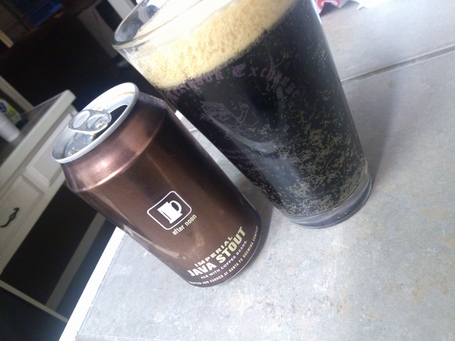 Honestly, this is a wonderfully rich, luxurious beer that could almost serve as a desert. The bouquet is that of a rich mocha coffee drink, with a deep roasted flavor. It has a soft, smooth opening. The roasted malts just roll right over your tongue and then transition into a coffee flavor, with just a hint of bitterness that combines the coffee flavor with a rich, dark chocolate. There's a bit of a lingering bitterness, but that's from the coffee & chocolate, not the hops. One of the best beers I've had in the last year, a definite five out of five stars.