LSU vs. ULM: What to Watch For

Share All sharing options for: LSU vs. ULM: What to Watch For

More of the Same

Todd Berry's carved out a pretty solid niche for himself at ULM. They've finished .500 or better the last two seasons, made the program's first bowl game in some indeterminate amount of time I'm too lazy to look up. What's more, he's built a program that's been good enough to beat a couple of power-five conference programs, and put some pretty big scares into others. 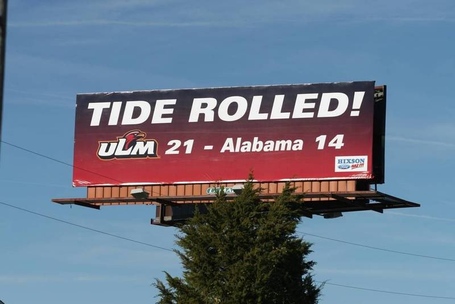 Baylor, Arkansas, Auburn and Alabama have all fallen or gotten a nice scare courtesy of ULM in the last seven years or so. Add Wake Forest to the list (yes, a crappy ACC team, but an ACC team nonetheless) as of week one.

A major reason for the Warhawk renaissance has been a hurry up, no-huddle spread offense that hasn't been afraid to try some different looks. This marks the second straight HUNH spread team on the LSU schedule, and as I mentioned last week, it won't be the last. Mississippi State, Auburn, Florida, Kentucky, Ole Miss and Texas A&M all run some form of a HUNH offense. Those teams may all have better talent (although that's debatable with Kentucky), but this game still gives LSU defensive coordinator John Chavis a chance to see how his defense matches up against spread formations and personnel groups and handles the tempo.

LSU can continue to work on finding the right personnel for its nickel and mustang packages, and work on rotations for positions where depth is still a bit of a question -- defensive tackle, linebacker and safety.

Up front Christian LaCouture and Quentin Thomas appear to have the starting spots locked down, with Davon Godchaux clearly one of the first guys off the bench. But after that, it seems to be a scrum of Frank Herron, Greg Gilmore and Maquedius Bain. Miles had been so complimentary of Herron in August, it's been surprising not to see much of him. But maybe that begins to change. Locking down the A- and B-gaps versus the run, especially versus zone blocking like most spread teams employ, will be huge for this team going forward.

At linebacker, Kwon Alexander is likely still a little dinged, and there's no reason to risk a veteran like him in a game like this. But for guys like Deion Jones, Lamar Louis and Kendell Beckwith, there's still playing time to be grabbed in the rotation. D.J. Welter's probably staying in the starting role at MIKE -- people are going to have to learn to accept that he's not the worst player in the history of life -- but there are still reps to be had at the SAM position and in the sub-packages.

Safety is where things get interesting. Jalen Mills is the only constant -- and with him moving down into the nickelback position in that defense, LSU's going to play at least three safeties consistently. And frankly, Ronald Martin doesn't exactly have a strangle hold on the other starting job. Ricky Jefferson made the strongest case for a job last week with that incredible goal-line interception. There's also Jamal Adams, who, stupid personal foul penalties aside, has shown an incredible first step and some big-time speed. Dwayne Thomas sure looked good dropping into the deep middle of the field last week, but he's probably still best in his nickel/dimeback role. And then there's Corey Thompson, who hasn't seen much time to date.

Overall, this game offers us another chance to observe just what kind of team LSU is becoming in 2014 with all of this youth. Anthony Jennings played some great football last week but the quarterback situation remains unsettled, and there's still the developing receiver rotation.

Travin Dural is likely limited in some way from his wreck last weekend. Miles has said he will play, but who knows what that really means. It's easy -- and not inaccurate -- to say that the Tigers don't need him. Yeah, LSU shouldn't have a problem moving the ball with John Diarse, Trey Quinn, Malachi Dupre and Avery Peterson manning the top four receiver spots, and yeah, all of those guys are younger and need game experience. But so does Dural. Easy to forget that while he's got a season-plus of experience, he's still got all of 13 career catches. As great a job as he's done emerging as the No. 1 target on this team, he's hardly a seasoned vet.

Plus, honestly, with so many big plays through two games, I kind of want to see how an opponent tries to gameplan against him. Sam Houston State stayed so focused on the Tiger running game that Dural was pretty consistently in man-to-man coverage -- hence those big plays. So does he start getting bracketed with a safety over the top? That would certainly help the running game.

It's a particularly interesting matchup against the Warhawks due to the 3-3-5 style of defense that they play. The goal of that defense, of course, is to create a natural eight-man front for the run while still having the speed of five defensive backs on the field.

That front also creates a different look for Jennings and Brandon Harris as well. Pre-snap, the 3-3-5 features a ton of pre-snap movement, especially for run checks. The challenge for the quarterbacks there will be to ignore a lot of the window dressing and just go straight ahead, especially in I-formation personnel. LSU's going to have a significant size advantage in those looks, and shouldn't be afraid to take advantage. Versus the pass, it creates a lot of chaos and bodies moving in the underneath throwing lanes. But will that mean more mad bomber? There may be more one-on-one opportunities down the field.

At quarterback, I think Jennings is looking more and more like the guy LSU's going to want starting by SEC play. Yeah, Harris has a better arm, probably a little more speed -- a generally better physical upside. But Jennings has been running this offense like a player that just understands exactly what's asked of him for the last six quarters. That said, Harris still needs reps, because he's a freshman and the ONLY other scholarship quarterback on this roster. He has to be ready to come in. How the duos series balance out will likely depend on the rhythm of the game itself.

But more than any of these technical odds and ends, I want to see if last week's mentality carries over. LSU was damn near perfect from start to finish versus Sam Houston State. They were determined and focused to beat the hell out of an opponent that they knew they should beat the hell out of. I want to see more of that. Consistency could be an issue with a team this young, so don't be surprised if the backups get in and things loosen up a bit.

Another angle to LSU's matchup versus the ULM defense is that it's another look at a 30-front defense again, aka three defensive linemen, much like Wisconsin. In that game, LSU had a good bit of trouble picking up their assignments, particularly in the running game. Zone running heavily involves the center calling out double teams and which player is peeling off to the second level, so missed assignments means either the wrong guy is peeling off, or he's moving towards air. Given the way LSU struggled in their base two back looks versus the Badger front, I don't take it as a given that just because there's a clear size advantage that LSU will be able to maul the hell out of Houston.

And that's where the return of center Elliot Porter to the starting lineup gets a bit more interesting. Ethan Pocic probably has the better upside at center -- or anywhere else he plays on the offensive line -- but Porter's a veteran that's played a number of snaps next to La'el Collins, Vadal Alexander and Jerald Hawkins. The thing I'll be watching for are the offensive line's dance steps versus the Warhawks on those zone blocks. Who's hitting who, and who's getting where. Are the Tigers hitting their spots and moving the crowd in the running game?

That's going to say a lot about how this front deals with more athletic groups that like to move around like Mississippi State, Florida and Alabama.