Yes, schedule matters. No, I'm not rewriting the formula to account for it

Share All sharing options for: ATVSQBPI and Schedule Effects

We took a week off from the ATVSQBPI, which I will do periodically throughout the season, mainly because that week's games were pretty terrible and there wasn't a whole lot to be gleaned from the information. It's more of the same this week, but it's good to at least check in on the numbers to keep it on our radar.

Eventually, we'll switch over to conference-only ATVSQBPI to help normalize for schedules, but too many teams have not played a conference game yet for that to have any value. So we'll still look at their overall number this week: 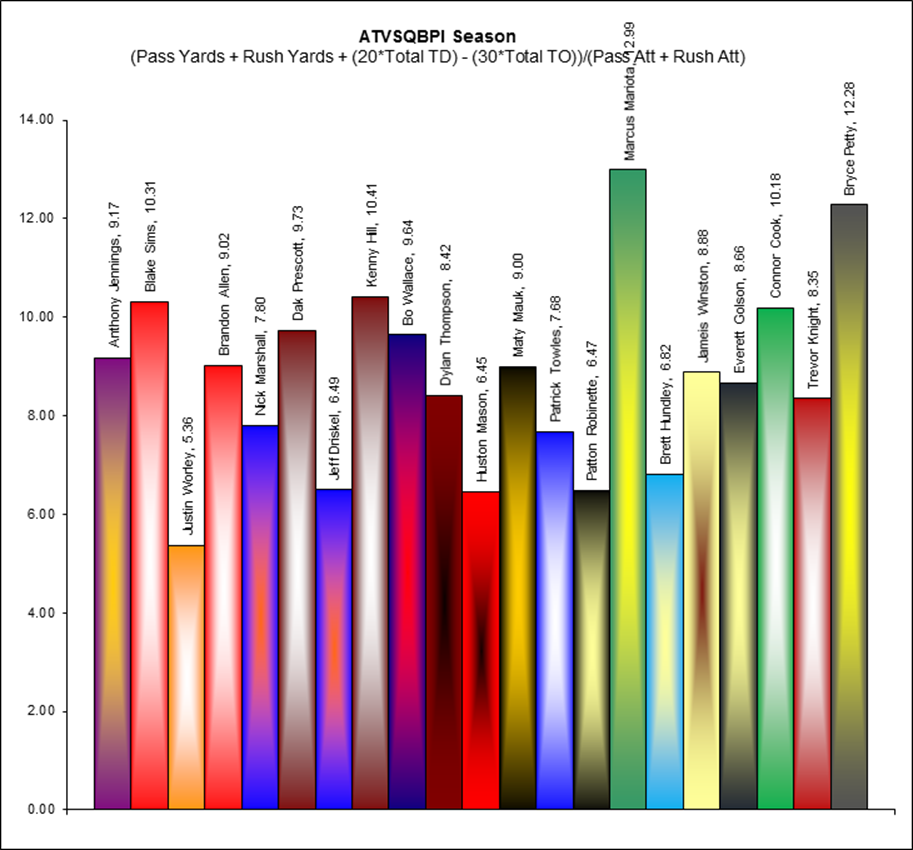 The first thing that jumps out are our two Heisman front-runners, Bryce Petty and Marcus Mariota. Both are averaging over 12 modified yards per attempt. It is keeping them ahead of the field, but they aren't blowing away anybody just yet. That's mainly because so many QB's have an ATVSQBPI over 9 right now, which is primarily a schedule effect.

This just in, it's a lot easier to put up big numbers against non-Power 5 conference teams. This is a stunning breakthrough, and one that we make every year. Take early numbers with a gigantic grain of salt. Now, this usually leads to some of y'all asking for us to modify the formula to account for schedule strength.

Now, this request isn't wholly unreasonable, but it's a fool's errand. First and foremost, it would make a fairly straight ahead formula so much more cumbersome. I like a stat that anyone can calculate on a Post-It Note. Additionally, I just don't like how anyone calculates strength of schedule, so then we've weakened the accuracy of the rating here by adding an unreliable modifier. I'm also not that enthused by overrating players who tear apart weak competition. Even with "normalizing" factors, it tries to make a guy who puts up huge numbers against outmatched foes on the same level. I just don't trust it. Let's just let the formula do what it does, and we can make mental notes about schedule.

But, man, Anthony Jennings sure has been efficient so far this year. He has wrested full control of the starter's gig by doing exactly what we want an LSU quarterback to do: throw for around 200 yards and don't turn the ball over. He fell off the wagon a bit this week, but still, I like the early results. 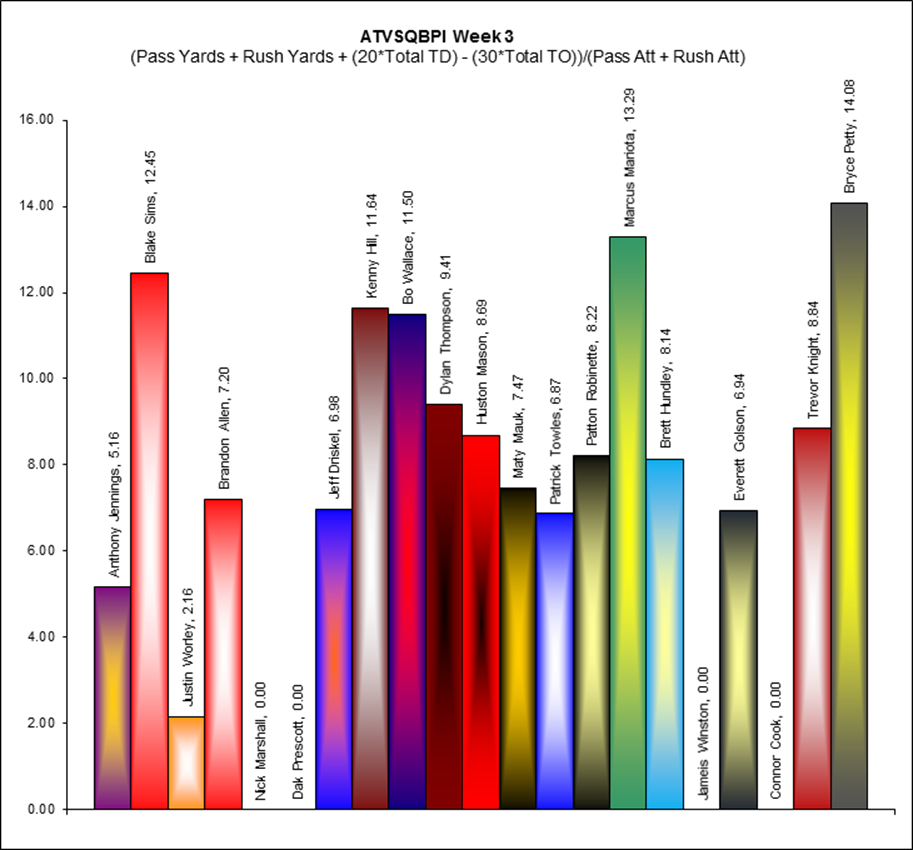 Yeah, about falling off the wagon a bit, Jennings had a pretty dismal game against ULM. He didn't score, turned it over once, and only accounted for mediocre yardage. It's a bit of concern, but it's just one game, and one that LSU won 31-0. I'm more encouraged by the overall body of work we discussed above, which takes into account this game.

You can tell the difference in team quality by how the ATVSQBPI's look so radically different in close games. USC and UGA fought to the end, and their QB's went for 9.41 and 8.69. That's two good QB's both having good games, trying to get their team the big win. Meanwhile, in Gainesville, the QB's went for 6.98 and 6.87, respectively. That's not awful, but it does show that it wasn't a close game because the offenses were raising their game. It was close because each team sputtered and crashed. 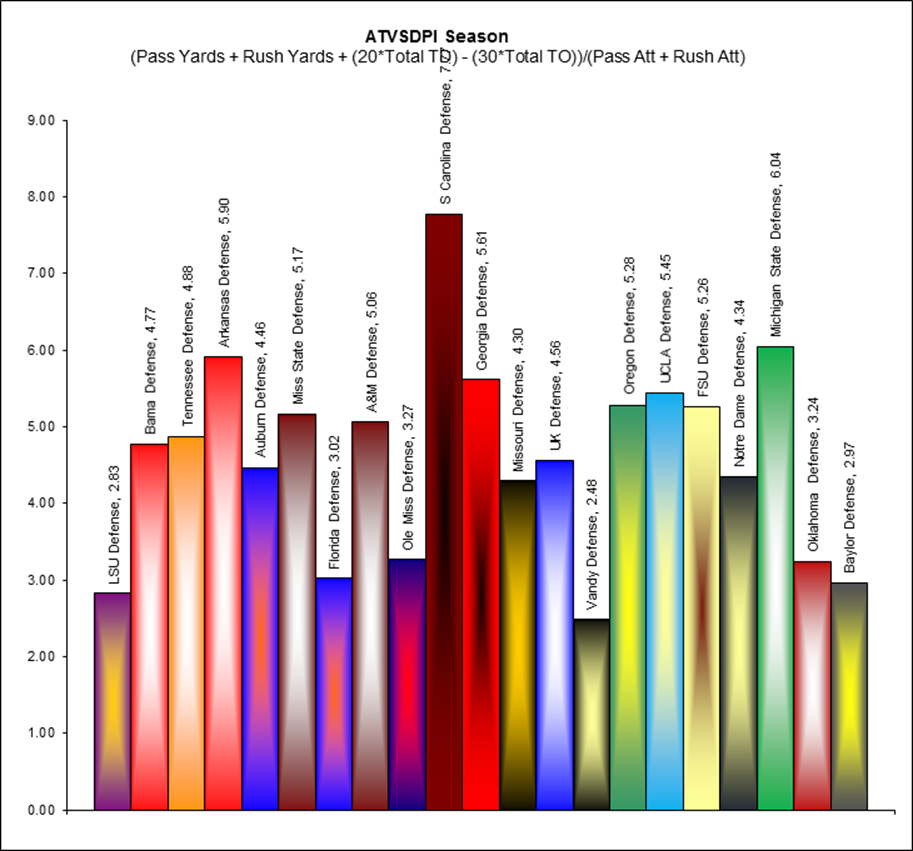 Speaking of giant grains of salt, the SEC mean ATVSDPI right now is a 4.80. That won't even come close to holding up as the season wears on. This is all schedule effect, as even Texas A&M looks mildly competent on defense despite allowing 478 yards of offense to friggin' Rice. Don't believe it. They are still below the SEC average, and that number will get bigger as they start playing teams with a pulse. Well, not SMU, but eventually.

That also means that Alabama, right now, possesses a thoroughly average defense. I'm not sure that is a mirage. They let up a bunch of yards to West Virginia, and then virtually nothing to FAU. Last week, against a decent Southern Miss team, they posted a 4.78, pretty much right at their season average of 4.77 and the SEC average of 4.80. To give Bama some credit though, no one has shown they can run on them: they've allowed 141 yards on 65 attempts, a 2.17 average. They also have only allowed one touchdown on defense, so maybe this bend but don't break thing might actually be working.

The last thing I'd like to point out is that Vanderbilt currently leads the SEC in ATVSDPI, according to our chart. Now, we know they stink, so how is this possible? We screwed up the chart. The defense actually has a 5.58 rating, putting them comfortably in the bottom half of the conference. Rest easy. They still stink, we'll fix the charting next week. LSU is your leader in the clubhouse, with a 2.83, which makes perfect sense.

*The numbers and charts are all courtesy of ORtigerfan, who does God's work putting this together. Please don't think I'm criticizing him on the Vandy thing. We've fixed the error, but I thought it would be more fun to show my thought process as I saw the data, went "WTF?", and then tried to make sense of it.