Thoughts From The South Endzone: A Nightmare

Share All sharing options for: Thoughts From The South Endzone: A Nightmare

How do you talk about something like last night? 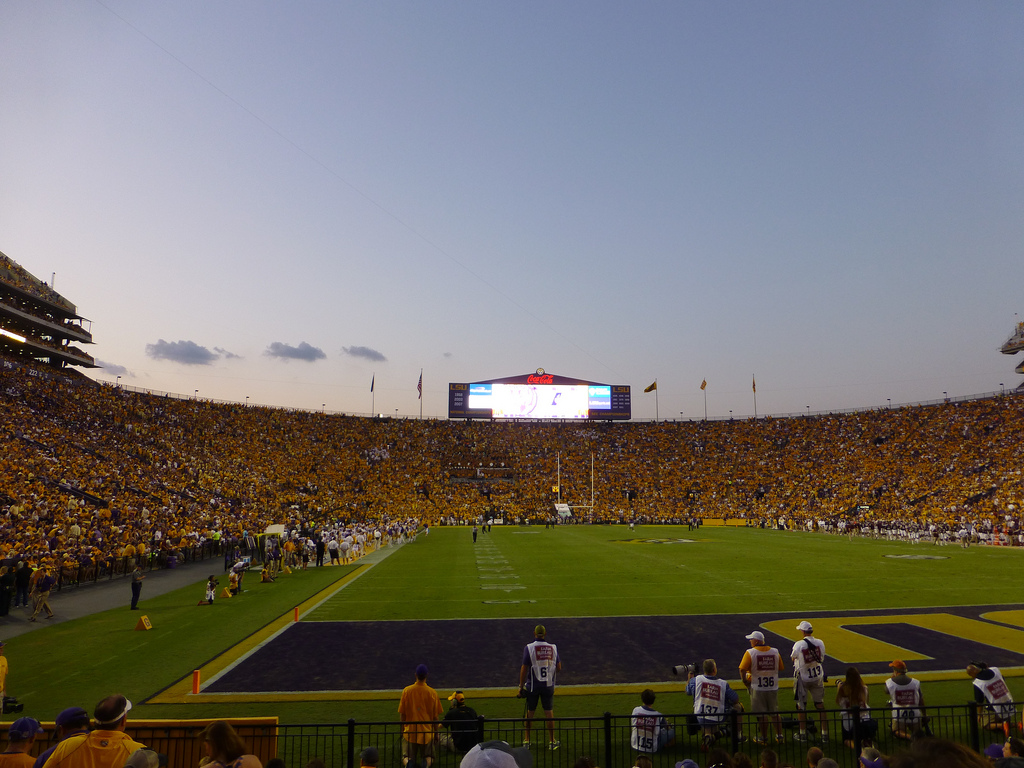 There are others here who will do a better job of breaking down just exactly what happened (eventually, if I can find them), but from my seat it was simply total domination for 3 2/3 quarters. An offensive line that offered no protection, no push, and a shocking amount of basic snapping problems. Running backs with blinders on. Wide Receivers who couldn't beat their coverage. Jennings throwing passes to no one or simply making the wrong decision on his reads. A defensive line you could drive a Starkville home through. A secondary that would forget their own assignments in moments of panic, leaving State receivers wide open as release valves for Prescott.

The only unit who gets a pass last night is the special teams, and that's mostly for just being LSU's only competent unit on the field. Kicking was good, punting was good. With every drive that stalled miserably, the Punt team had great coverage that tried desperately to give the team a re-ignition spark, but to no effect.

The coaching staff is not exempt from this list of failures. Who knows what the gameplan was, but I'd be surprised if it wasn't "This is Miss St., they are beneath us and will always be beneath us. We will dominate them with superior talent and let nature take it's course" And who could blame them? It's Mississippi State. The Bulldogs haven't won in Baton Rouge since before almost every player on the field was born. It's the way the world is supposed to work. State will be scrappy, sure, and maybe they take advantage of an opportunity or two and grab an early lead, but eventually the physically superior team will wear them down until they cannot stand it any longer.

It was pretty clear early on that that wasn't going to happen. More than anything else in this game, I was shocked by the dominating performances of both Mississippi State lines. Dak Prescott is an extremely talented athlete for sure, but his job was made so much easier by an offensive line that spent all night doing whatever it wanted. Prescott had 105 on the ground, joined by another 197 from RB Robinson. Add another 268 through the air for good measure and the disaster was complete. LSU isn't supposed to give up yards like that to anyone, let alone some un-ranked, pissant State team who came into Death Valley on a Saturday night. As for their D Line, how much more of an alarm do you need than being unable to punch in on a 1st and goal on the 2? They kept the pressure up to a level unimaginable for a State team, with a 3rd sack (that was nearly a safety and injured Jennings' shoulder) putting an exclamation point on the evening. 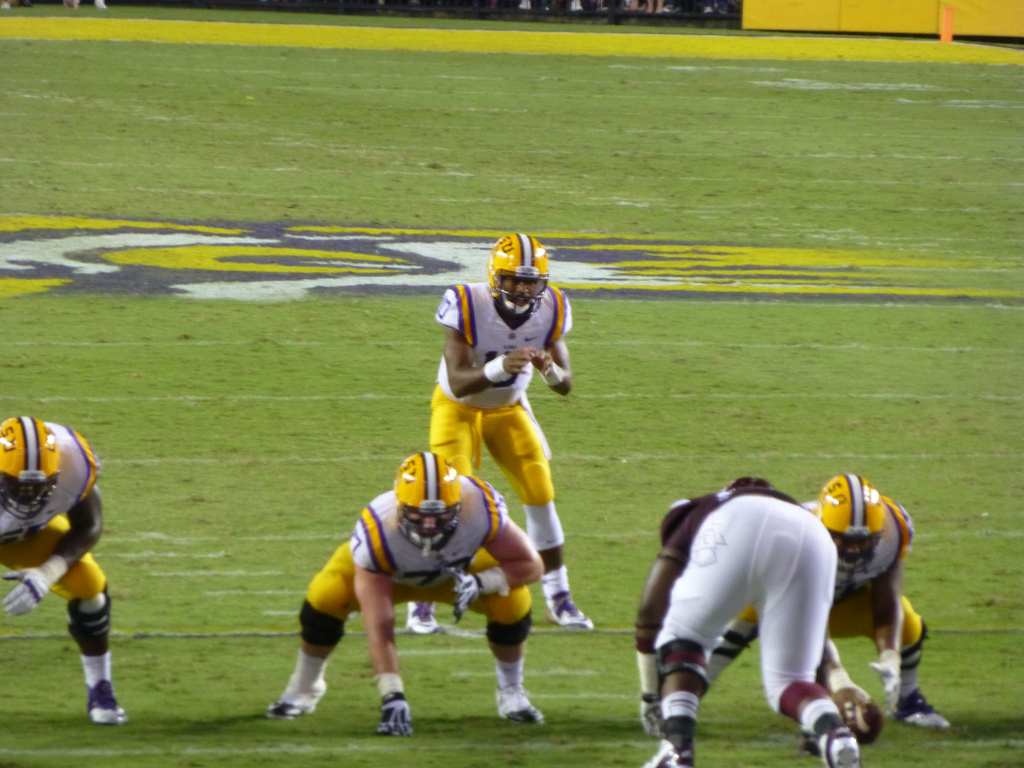 And yeah, sure, the last half of the 4th quarter was interesting. With freshman Harris in and up 34-10, can you really blame State for letting off the gas? (Think about that for a minute. Let it sink in. STATE LET UP ON LSU.) Faced with a sure loss and a different QB under center, somebody upstairs thought "Eh, let's wing it and see what happens. It can't get any worse tonight, right?" Credit is due to the LSU players who decided to play for their pride looooong after the stands had nearly emptied and the outcome all but settled. Is Harris' 140 yds passing in ~4 minutes of game time vs Jennings' 157 yds in a near full game enough to start a QB controversy? I mean, it's not like anyone is going to be talking about New Mexico State this week. 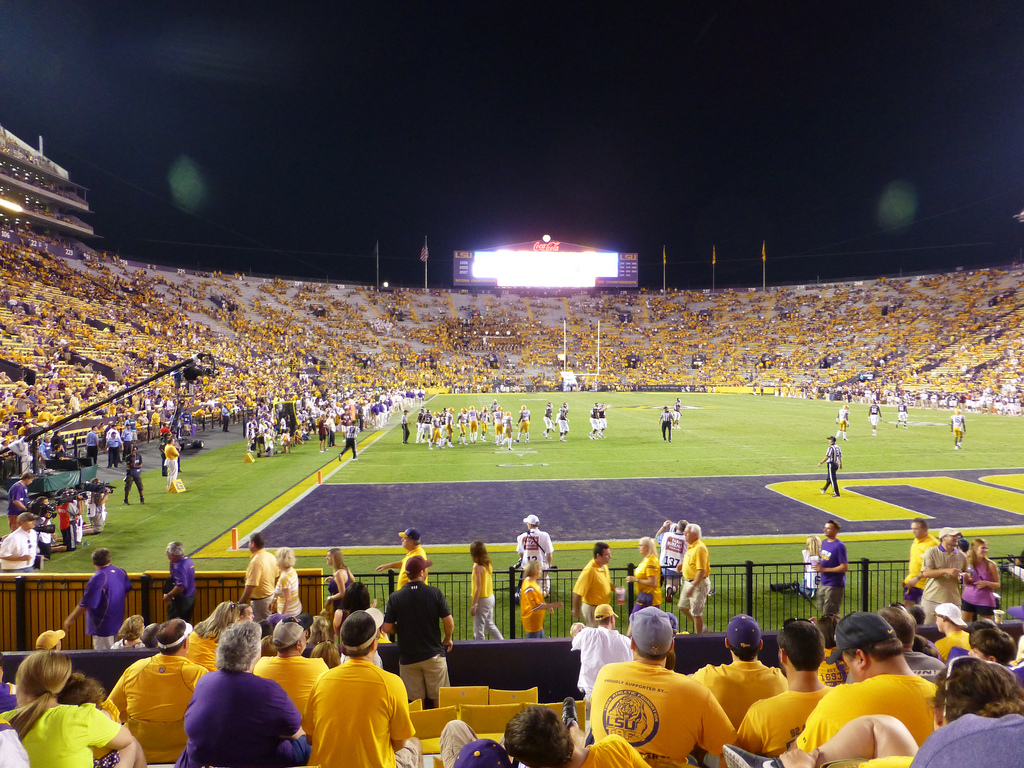 And you know who else failed this week? The fans who left. I don't wanna hear any of the pathetic excuses you assholes have been trotting out for the last couple years about why you leave early neither. "It's a lost cause." "Gotta beat traffic." "I hate Les Miles." SIT YOUR ASS DOWN. The cost of attending a game in Tiger Stadium has skyrocketed in the last decade because all you precious snowfakes who need a barcalounger, a big screen TV, and other frivolous non-football nonsense to enjoy a football game, need to be coddled to the point of unconsciousness. And then you bastards can't even be bothered to stay. I want to recount to you all of the losses in Tiger Stadium in the last 5 years.

That's it. Two. Two in Five seasons. That is a record of excellence nearly unparalleled in all of college football and you lazy assholes can't be bothered to stick around for a game that wasn't even running late into the night. You make me sick and embarrassed. A Shame upon all of you in this terrible, horrible, fair-weather fan base who whines and complains and screams bitching to the high heavens like the worst spoiled toddler at any minute that things aren't exactly they way they want it.

To you I say: Stay Home. Sell your tickets to someone who will appreciate it. You go to Death Valley to bear witness to a football game. EVERYTHING else is secondary. Tiger Stadium does not need you and your weakness.

The CFB playoff trophy is the chintziest looking thing I've ever seen someone claim to be a major award. It's a giant E-cig. 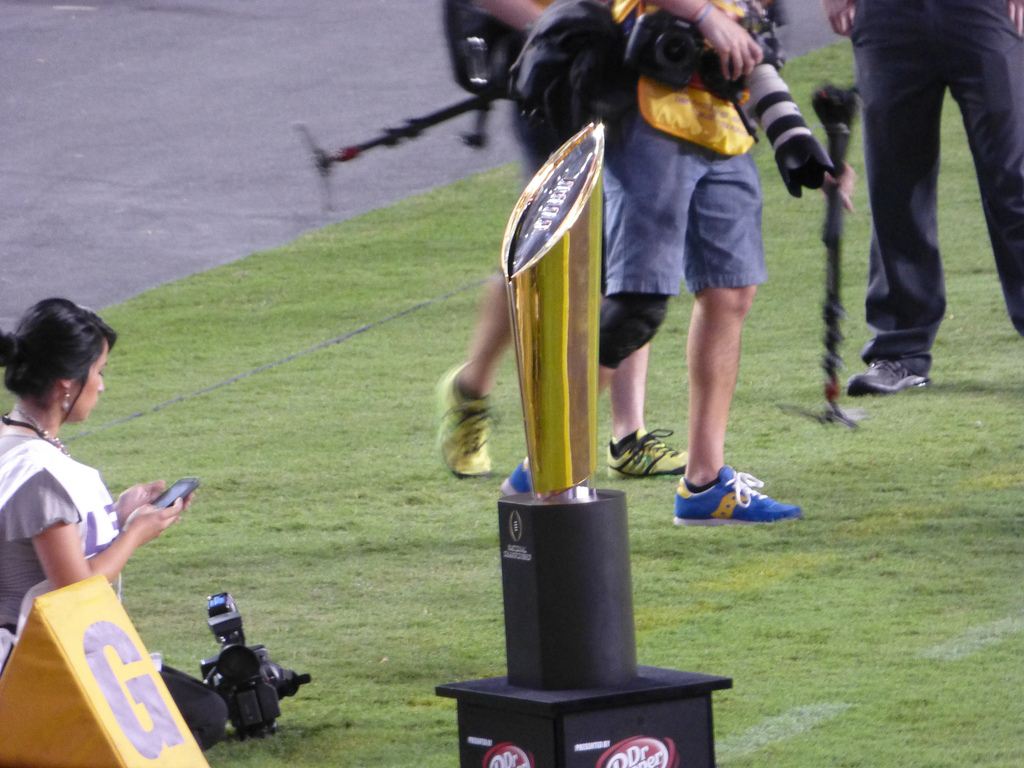 And it's base is a trash can 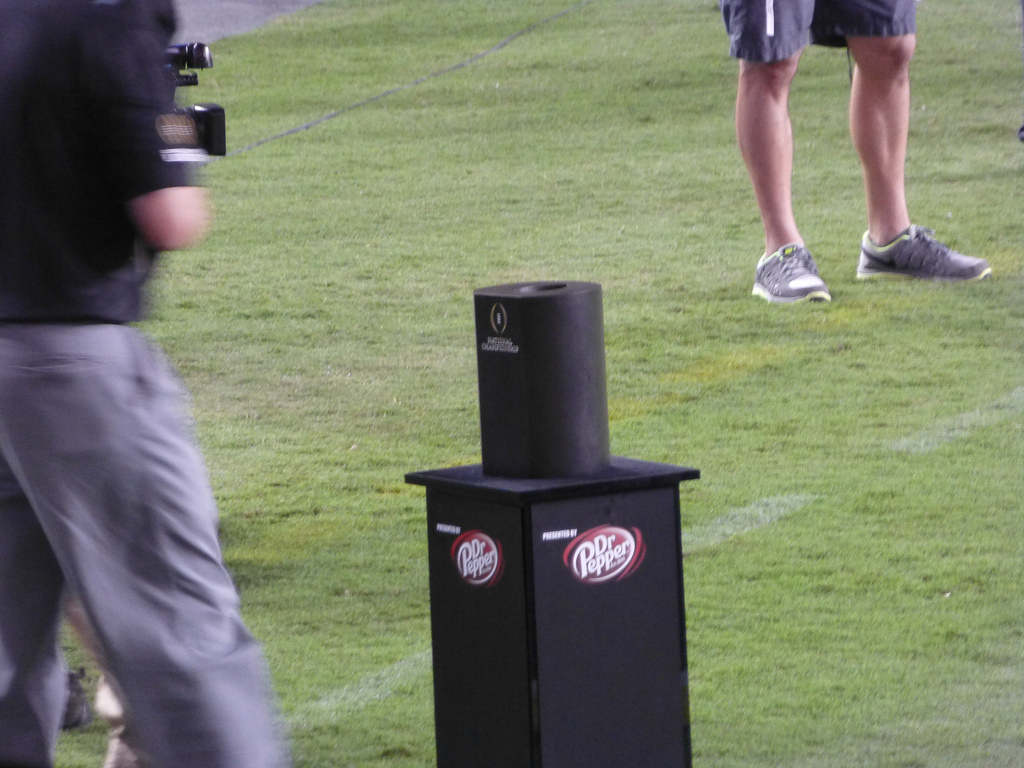 Props to backups Brandon Bergeron and Luke Boyd who spent all night holding up the cheapest, last-minute-idea-est looking play placards I have ever seen. 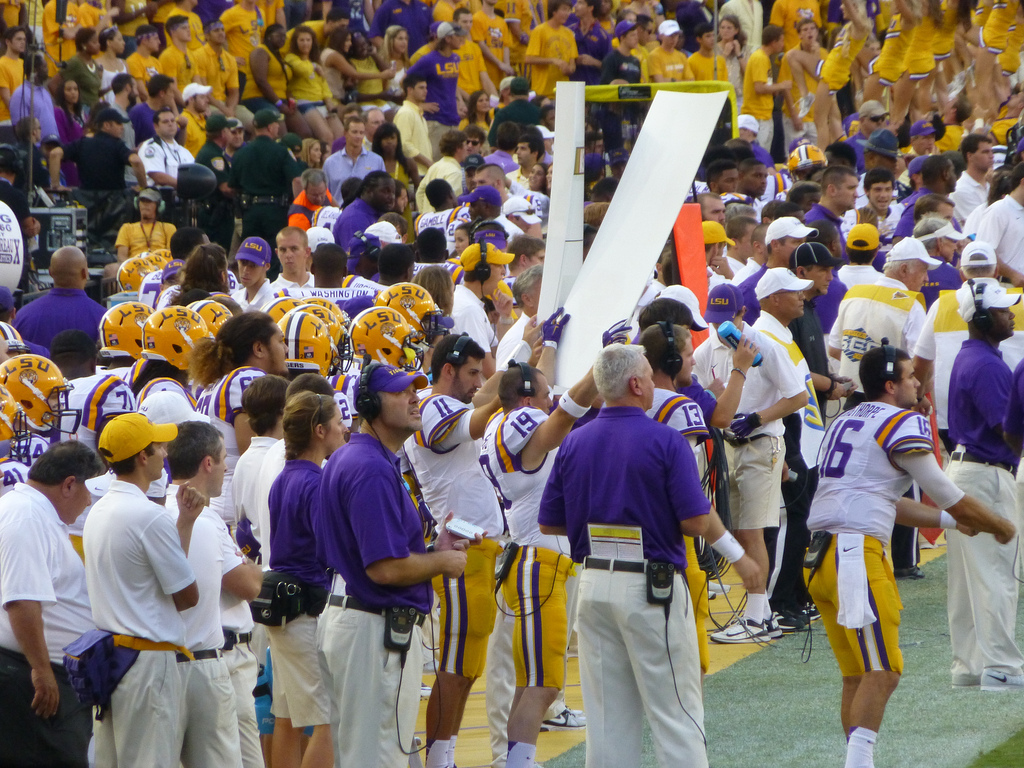 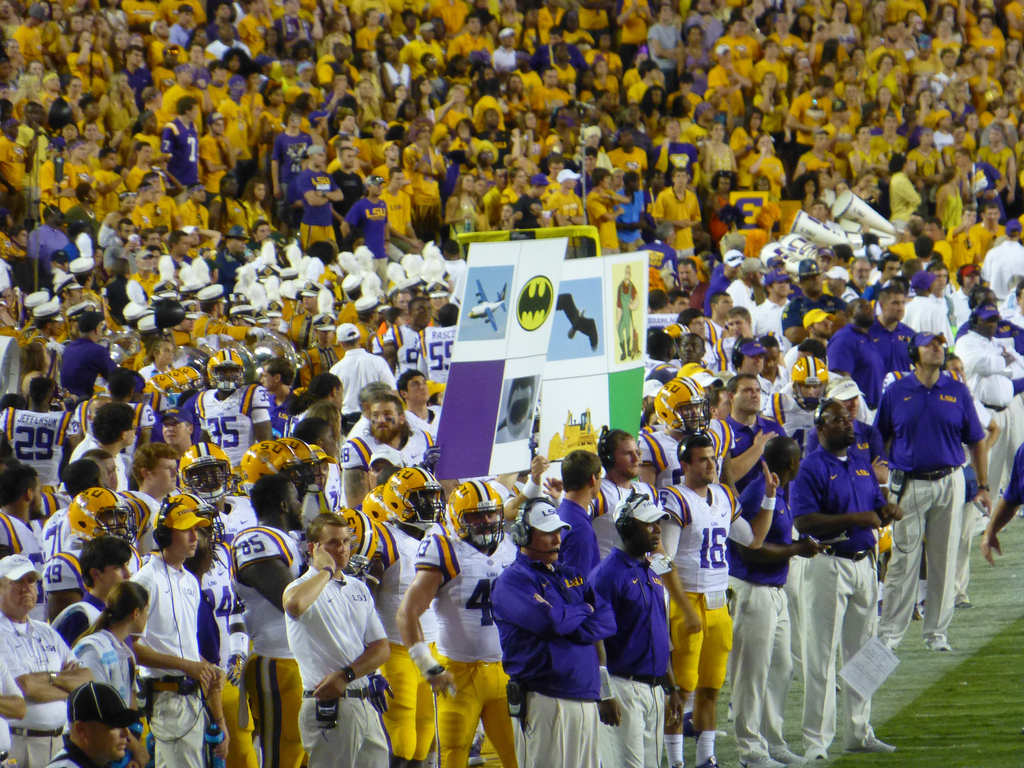 To my knowledge, LSU has never used placards before. They certainly didn't use them in the first two home games this year. Any observer instantly thought "Well, those obviously have no meaning besides misdirection" The use of the same, rarely changing (they may have had 4 different ones total) placards whether LSU was on offense or defense made the lack of illusion complete. Burn them, and discipline whoever came up with that dumbass idea. 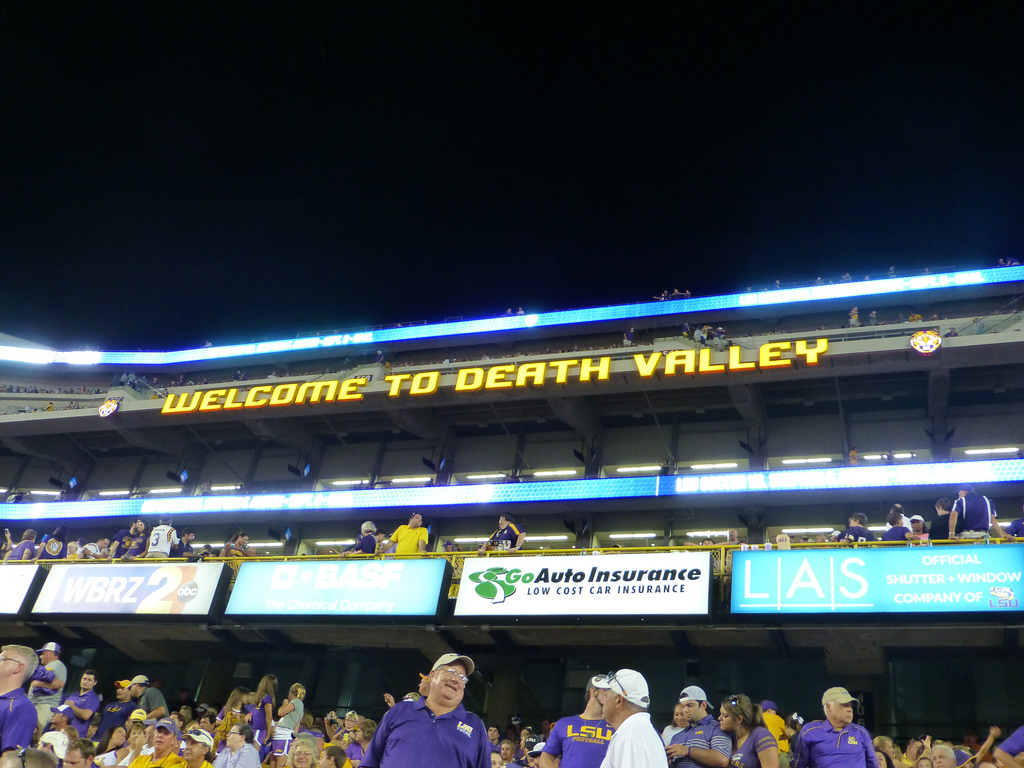 (forgive me, some of this is not exactly new info. I've been meaning to do this for weeks)

Life in the South Endzone has been interesting this year. The new south video boards are so big and clear from my seats, it's almost like being in front of a flat screen at home. 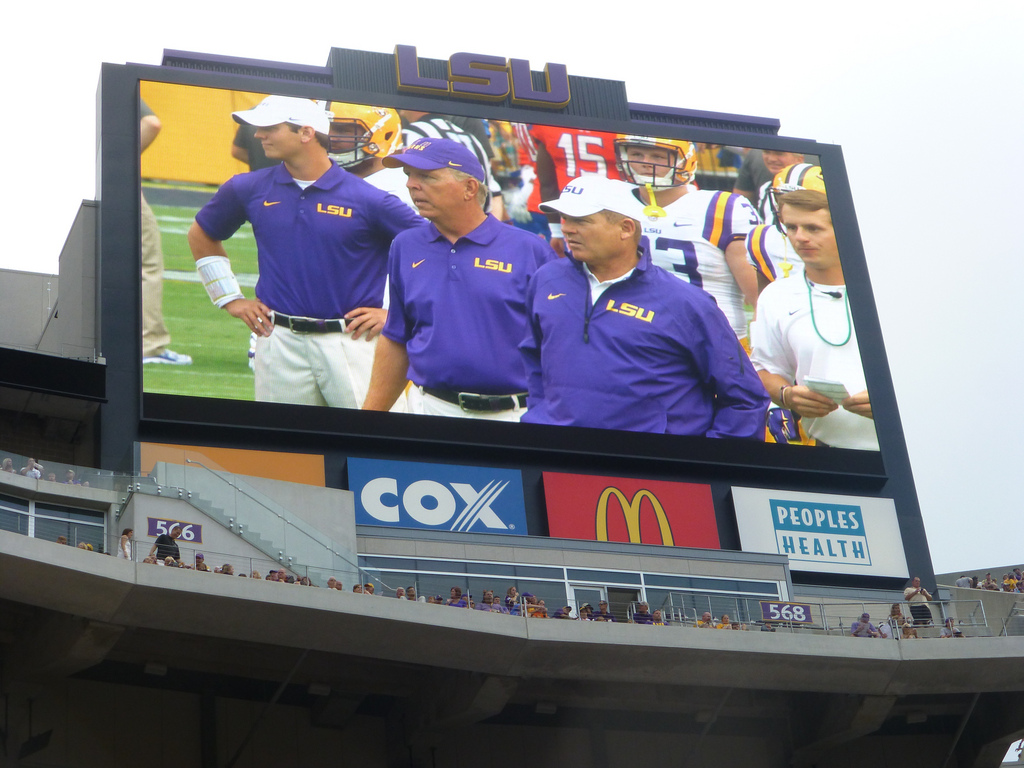 And the new SEC regulations that allow conference games to be shown during down times is very welcome. 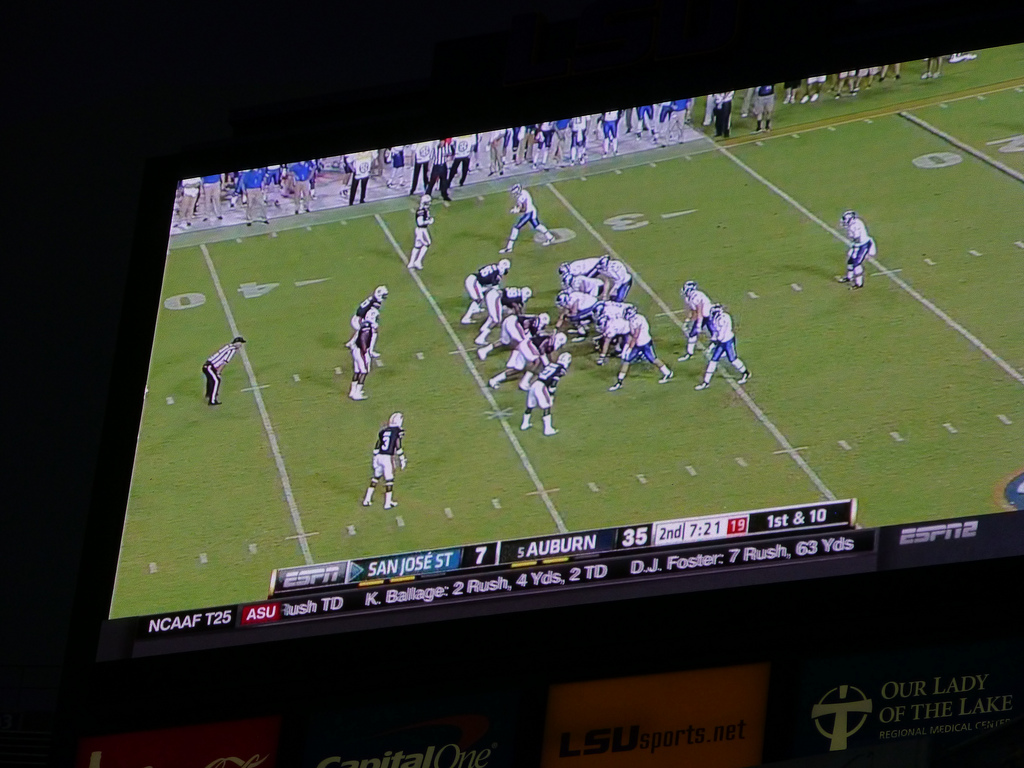 Of course, this is LSU. So by the third home game, the screen in the SW corner was busted and half-functioning for most of the night. 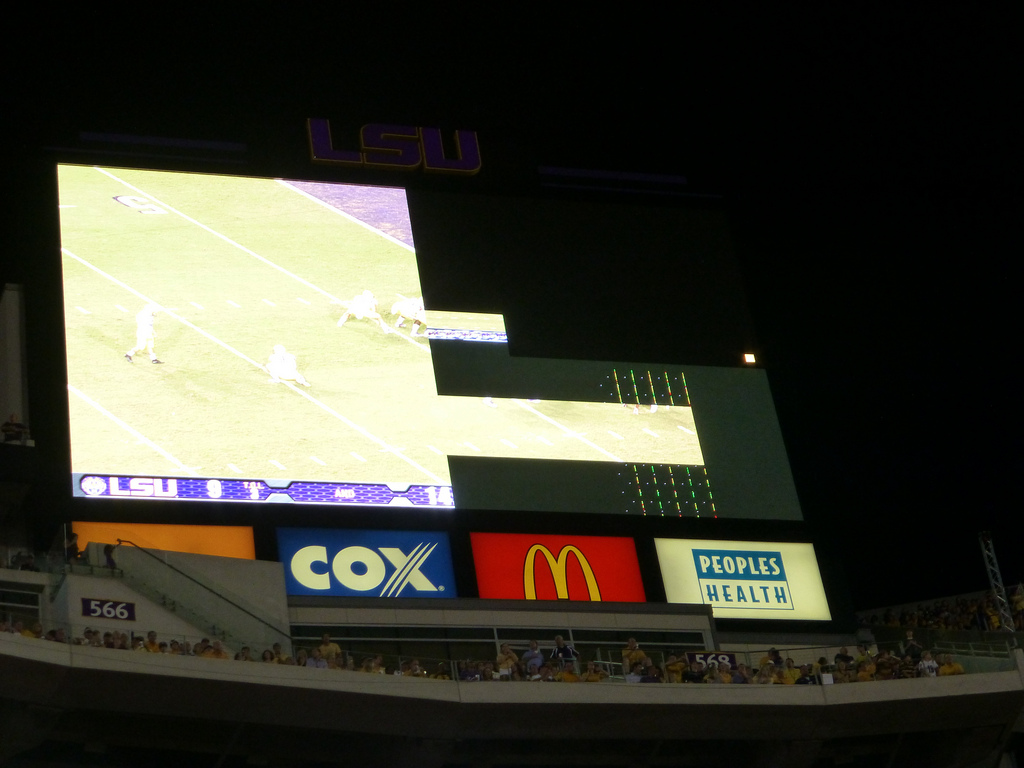 The echoes are strange, especially when it comes to hearing the band play. I swear, I think they've got the band mic'ed this year. A few times in the earlier games this season there was some severe feedback noise when they played. 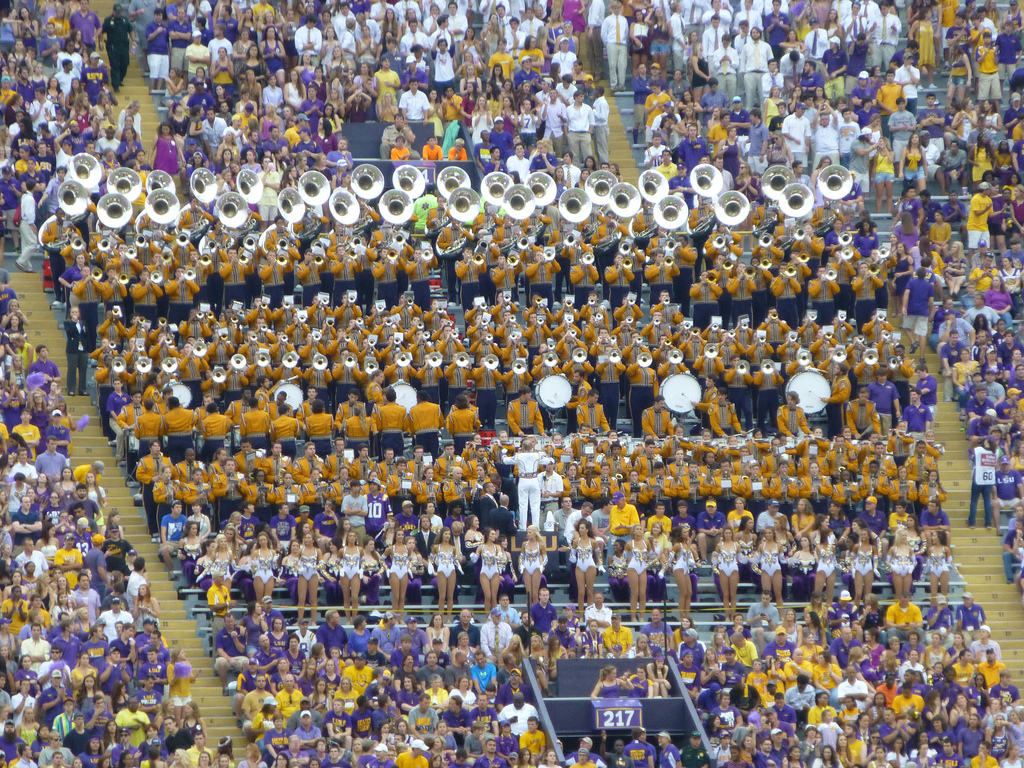 The feedback might also be caused by some new speakers on poles that ring around the upper decks and the North Endzone. If that's what's going on, then what the hell is going on? You don't mic up a marching band. 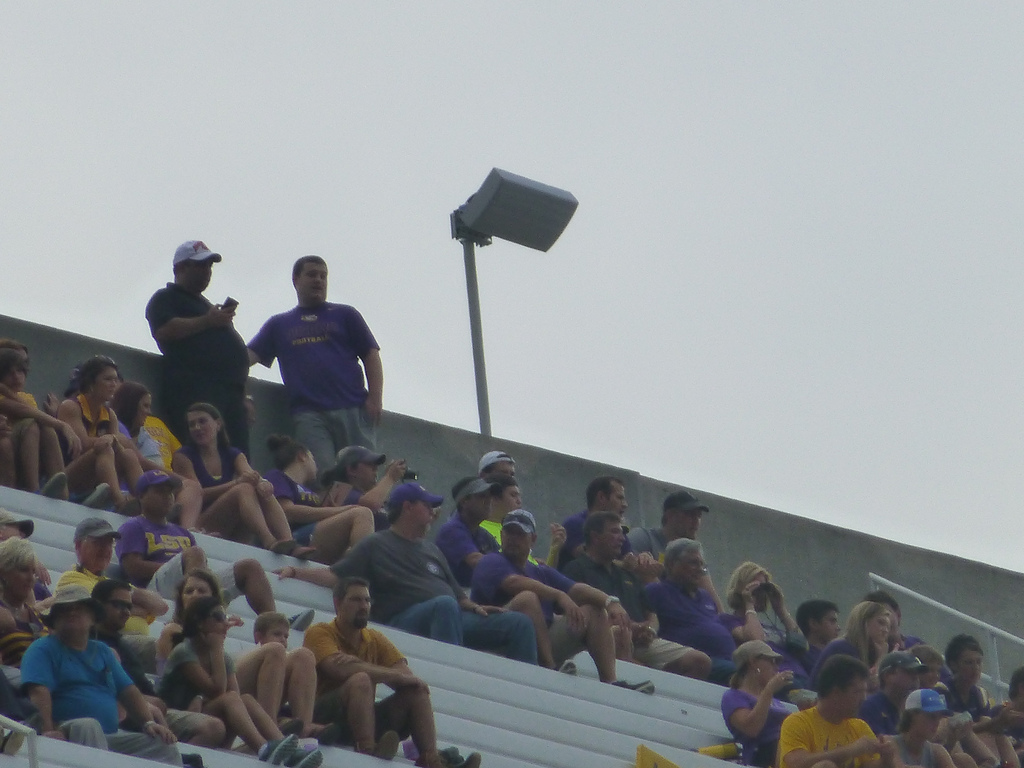 There are some nice little touches about the expansion that you'd never know unless you came out for a game. In the corners, there are now dedicated ribbons to game stats and an out-of-town scoreboard that just make life easier down here. 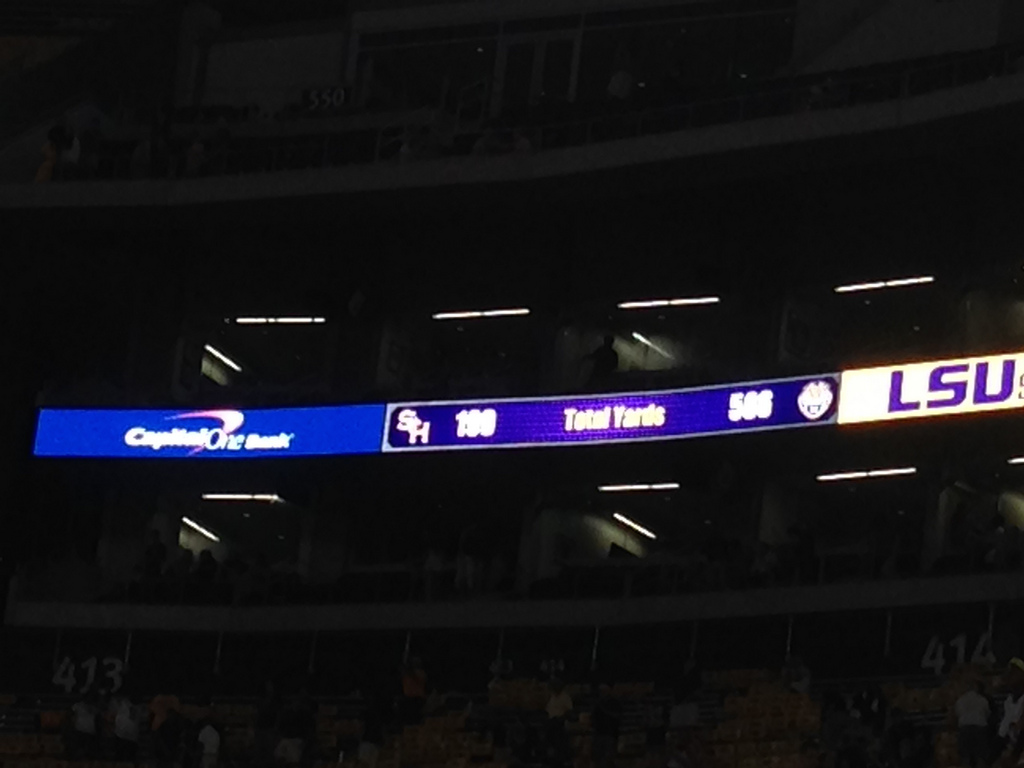 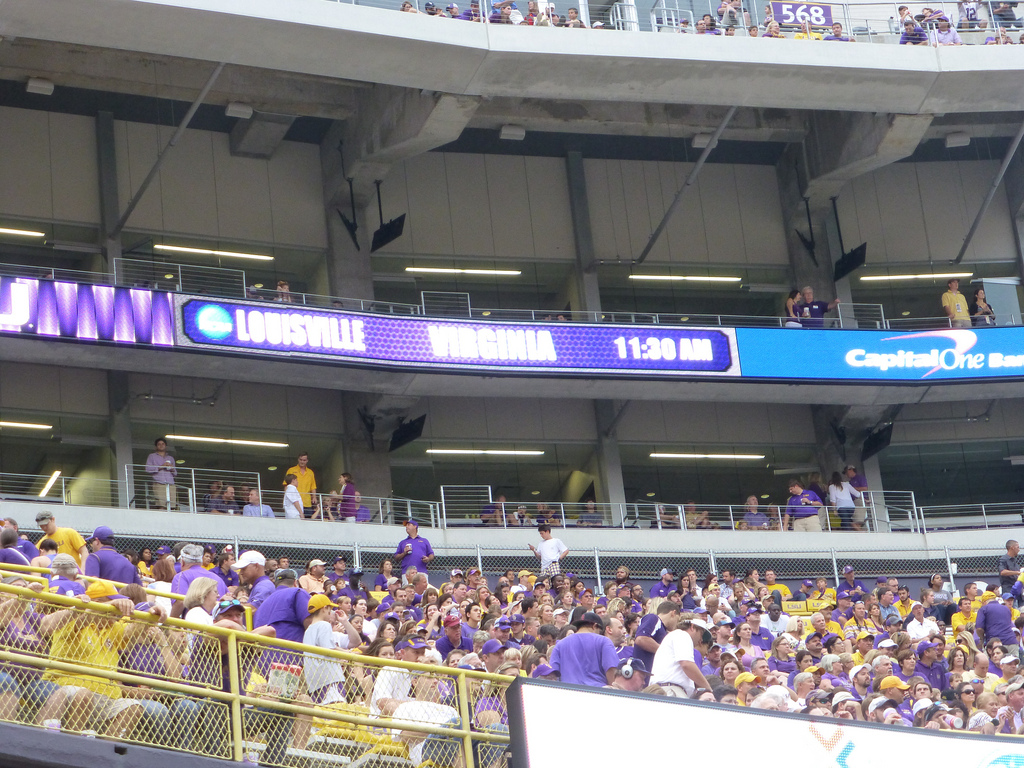 There is also now closed-captioning in Tiger Stadium, and I had to get a shot of the most famous words that come out of the PA system every week. 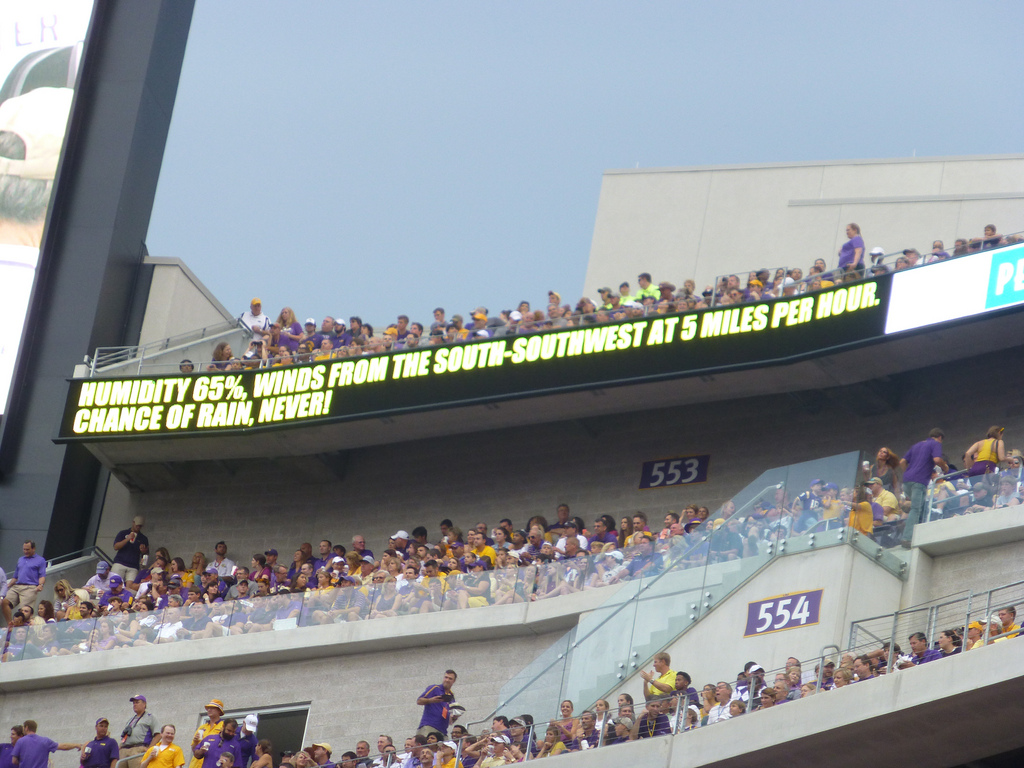 Getting to the seats in the South End has a little more hassle this year because entrance is restricted to gates 22-28 on the south side of the stadium, which means you enter and have to walk through the bowels of the stadium, all the way around the old dorms, to get to your seats.

Of course, this also means some relics are still preserved. 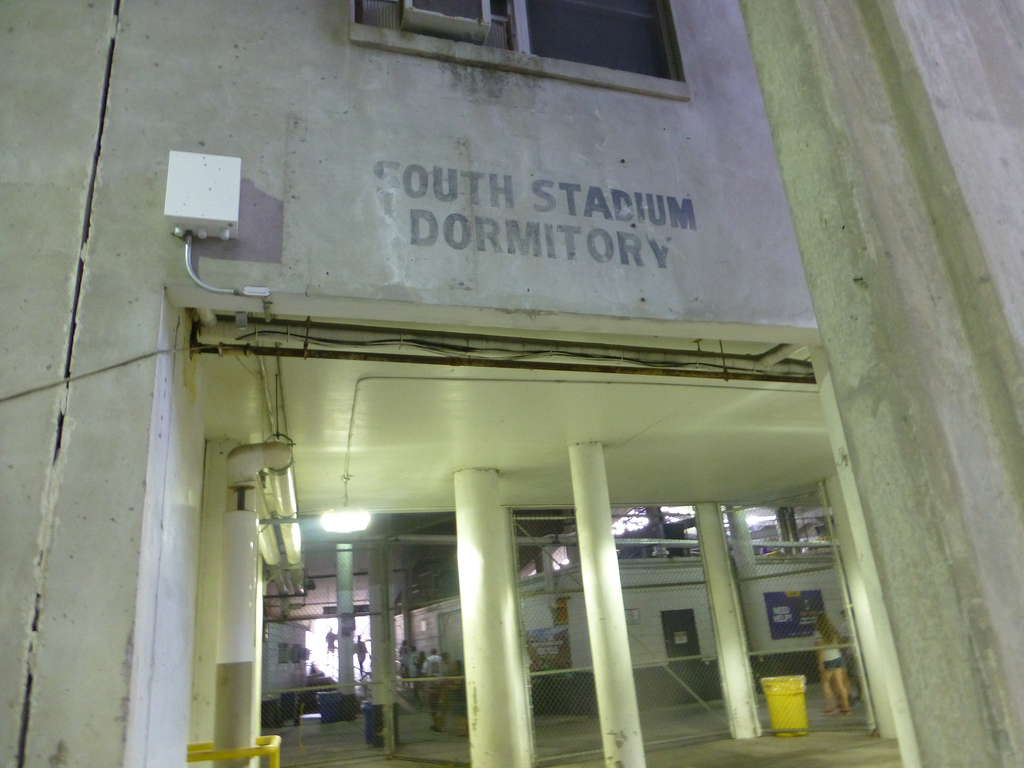 My brothers and sisters in the working media have been saddled with hilariously over-sized ad smocks this season, which look like potato sacks on some of the smaller reporters and photographers out there. I'm sure they are enjoying the true college sports experience of being used but unpaid by a university to make advertising revenue. Shout out to WBRZ's Michael Cauble, who has kept up a silent protest of wearing his in a way that renders the ad unreadable. Stay strong man. 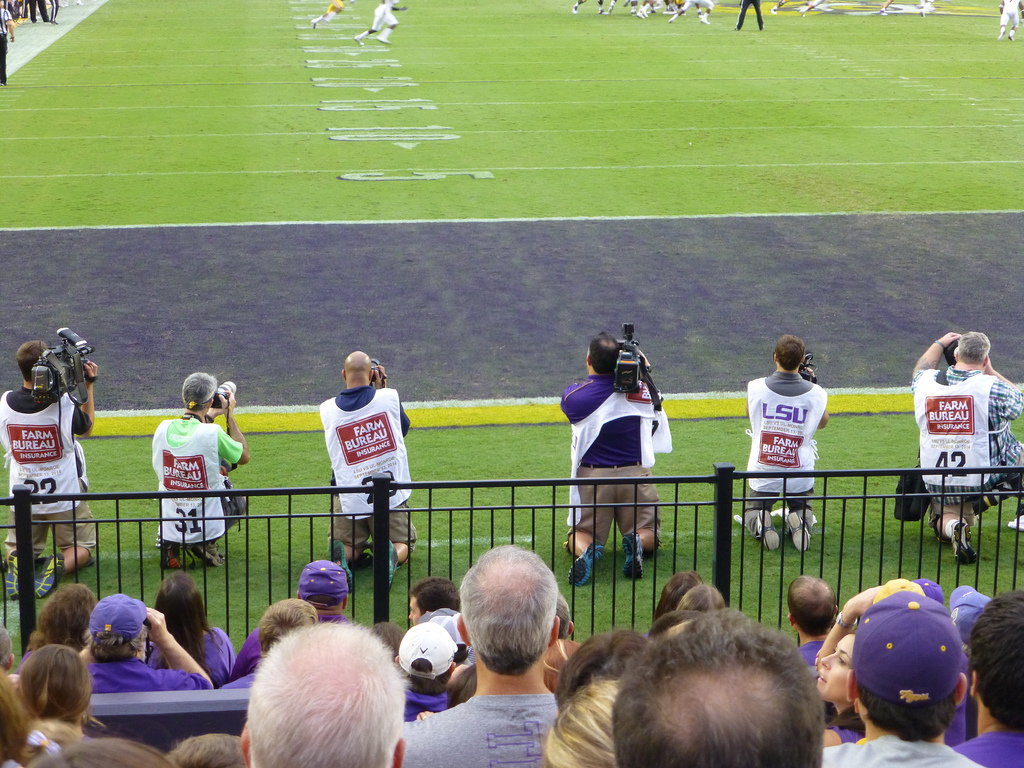 The thing I have complained about most for the last few seasons, the horrible mismanagement of screen real estate on the North Endzone video board, has FINALLY been somewhat improved. It aint perfect, but as you can see, much more of the screen is used for THEM FANCY MOVING PICTURES instead of static, unmoving ads 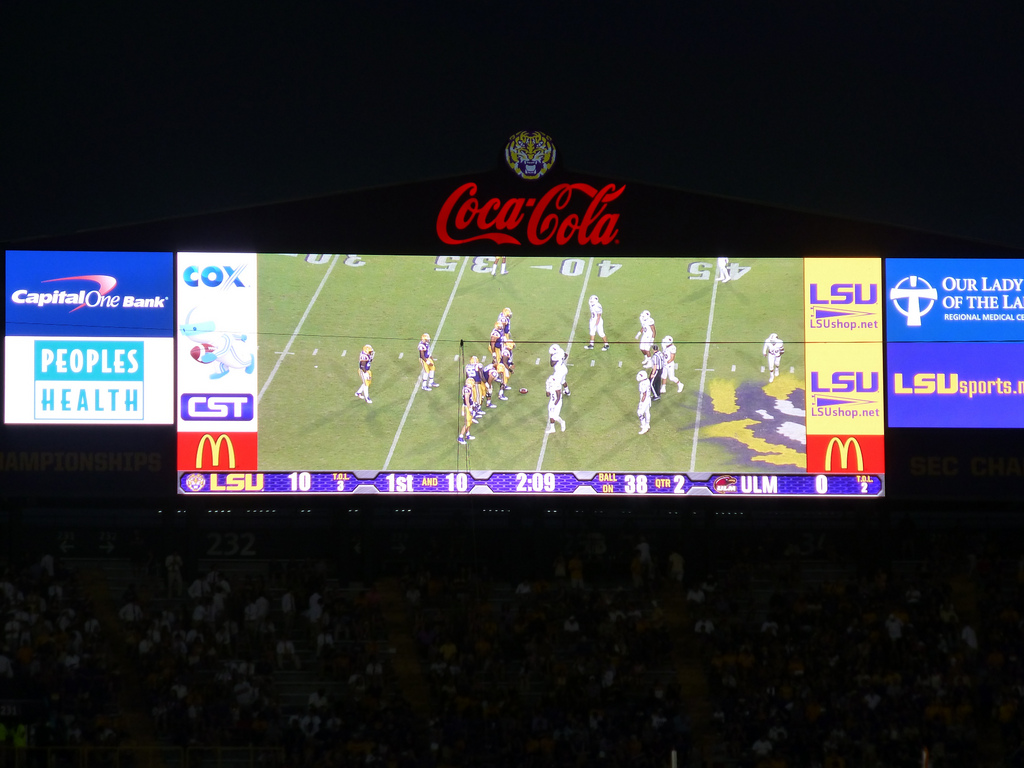 Of course, the change wasn't without it's trade-offs 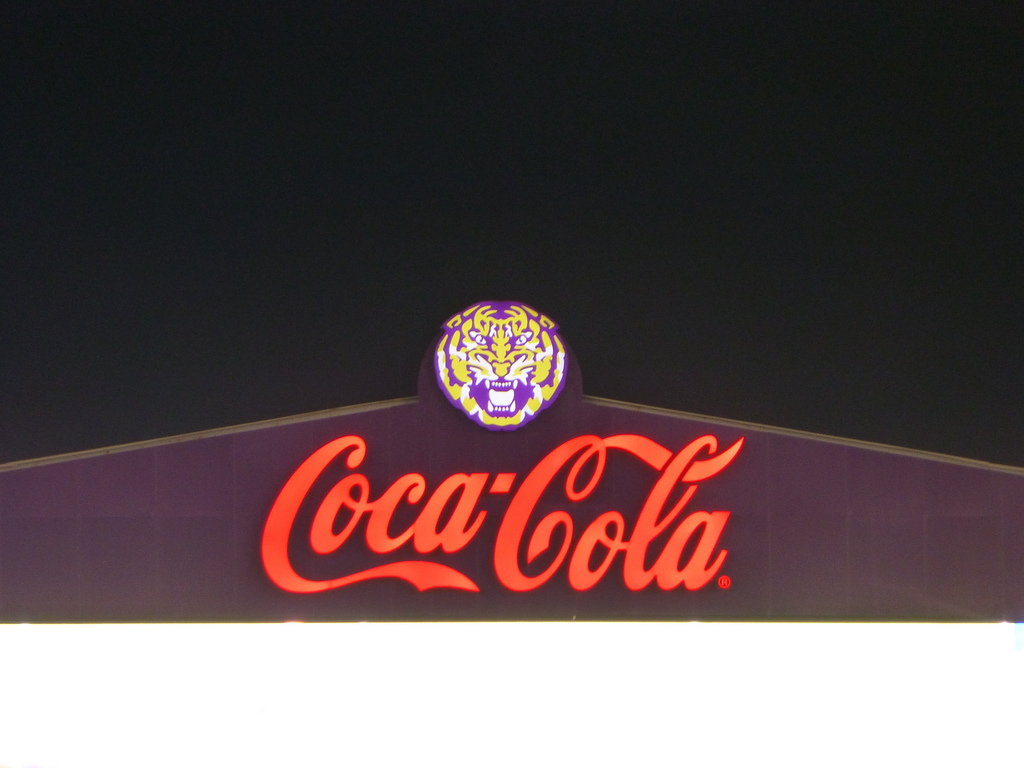 Not that you probably haven't figured this out, but I'll also note that after 3 games, Cell service is not improved one single iota from the last couple seasons. It dies 20 minutes before kickoff and doesn't come back until the place is deserted. I'm on ATT, but I've got seat neighbors on Verizon and Sprint, and they are experiencing the same. I can't speak for elsewhere in the stadium, but I sure hope LSU didn't spend a lot of money on these "improvements."

Mike the Tiger is now 0-3 on stadium appearances this year.

I'll leave you with a collection of some of the new pregame videos. It's quality stuff this season.