After a brief hiatus due to "real life things," here's some of the worst from Week 5, wherein Gary Nova wasn't even trying to have a good day. It just sort of happens.

Share All sharing options for: Race to the Bottom Power Rankings: Week 5

After a two week hiatus, Race to the Bottom is finally back to highlight all that was terrible in Week 5 of college football season. Sometimes real life gets in the way, and I'm still trying to figure this whole "adult" thing out, so I've been a little out of sorts. Anyway, without further ado, let's get to it. Remember, these are not authoritative, the rankings don't matter, and it's just for fun. 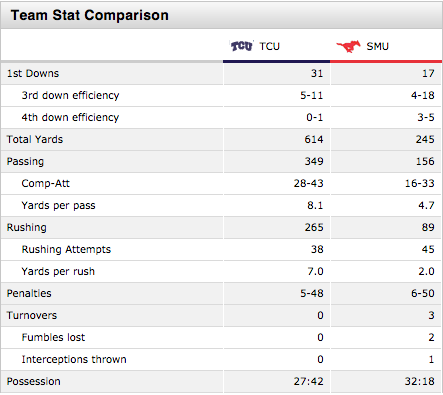 But lo...what appears on the horizon?

Texas outgained Kansas by a mere 16 yards (329-313), but was +3 in the turnover margin. Charlie Strong was so upset that Kansas didn't put up more of a fight that he fired Charlie Weis from Kansas, and likely deported him. Joke's on Charlie the Strong, however. Charlie the Weis is collecting money from three schools while probably drinking margaritas on the beach and fashioning a decided schematic advantage in the sand using his big toe. Weis will try teaching his new plays to children. Somehow said children will go winless in the Big 12.

Bob Diaco has an uphill battle at UConn, and everyone knew there would be growing pains. Halftime of this game looked optimistic for the Huskies, as they were only trailing 7-3 due to a 93-yard Temple pick six. In fact, Temple was fairly inept on offense, gaining 31 total yards in the first half and never crossing into Husky territory. The wheels fell off the UConn wagon after the break, when Temple ripped off two straight scoring drives and notched a second defensive touchdown on a fumble return. Could get worse for the Huskies? Well I doubt tha-

Okay, UConn giving up a safety isn't that bad, but I bet Temple's offense really came alive and they pushed UConn arou-- 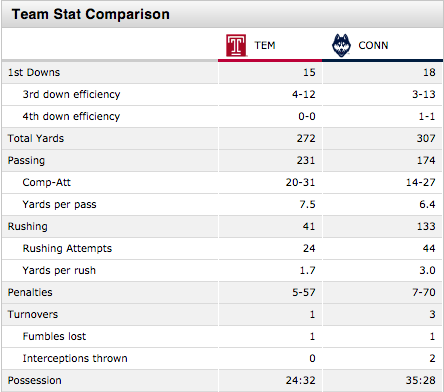 Northwestern isn't exactly what you'd call a great football team right now. Their lone win came against FCS Western Illinois after dropping contests to Cal and Northern Illinois to begin the season. A rejuvenated Penn State in Happy Valley against an opponent on the ropes seemed like an easy pick, which is why it's surprising that the Wildcats passed for eight less yards than Penn State's entire offensive total. A major culprit in this game was shoddy special teams on the part of the Nittany Lions. Northwestern's Miles Shuler returned Penn State's first punt 42 yards to the 31-yard line, a net of -2 yards on the 40 yard effort. Penn State's third punt from their own 12-yard line went out at their own 29. Northwestern had two fields of less than 35 yards in two of their first four possessions. While they only scored one of the short fields offered to them (it's Northwestern after all), the Wildcats notched a 60 yard drive for a touchdown and never looked back, allowing Penn State into their red zone only twice.

I can't say anything about this Michigan team or this game that hasn't already been said, so I'll just let the gentlemen at mgoblog.com (and it's worth your time to read it) handle this one. Instead, here's two golden retrievers being adorable:

Update: Michigan AD Dave Brandon released this statement at midnight just before I went to bed regarding Brady Hoke's decision to play a visibly concussed Shane Morris. At best it's an admission of incompetence, at worst it's blaming team medical staff for Morris being put back into the game because "they didn't see" Morris take the hit, which is an excuse so bad that wrestling promotions use it in their finishes all the time. My interpretation of the whole situation is that Dave Brandon, the coaches, et al threw the medical staff under the bus in an attempt to cover themselves, but I doubt anyone is buying their story. Things may have been bad under Rich Rodriguez, but this truly appears to be the lowest point of Michigan football in their history.

Gave up a 93-yard touchdown pass to Gary Nova, the same Gary Nova -- who has been playing football so long he still drives a Chevy Nova. The same Gary Nova that threw five picks against Penn State. While his sheet wasn't clean, Nova threw four TD passes against only one interception, enough to beat the Green Wave in Piscataway. Tulane is in the midst of transitioning to a new conference, so there's bound to be growing pains, like giving up 462 yards on the road. And don't kid yourself, it's not like Gary Nova meant to have a good day, it just depends on what the tides are doing.

FIU is not good, but they were good enough this week, and they even had a beat writer there to cover it all as they upended UAB at historic (cough cough) Legion Field. Despite their 0-1 mark in Conference USA, the Blazers have had an upswing this year, just not against FIU apparently. The Golden Panthers notched two pick sixes that were mathematically the difference in the game, but that's where the scoring goes clownshoes bonkers. FIU's single shortest scoring play was one of their pick sixes, a 25-yard return in the first quarter. If you're delving into boring offensive scoring, FIU's shortest scoring play was a 75-yard bomb with 3:37 left to play in the first half. The Golden Panthers' second touchdown pass was a measly 85 yards. FIU recorded nine first downs to UAB's 21, completed only 9 of 24 passes, and lost the total yardage battle 297-380. Defensive scores kill, and my God did they kill UAB. If you can't score against UAB on defense, just start throwing bombs.

With a drive chart like this, USF has already passed the B1G's first round of fitness tests before the next round of realignment. 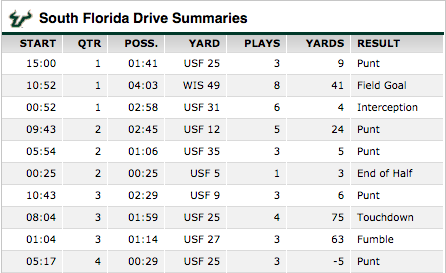 The Bulls also ran only 13 offensive plays in the second hald, a key component of Tresselball, which is currently a pillar of B1G T3N F00TBALL. Jim Delany looks forward to expanding his conference's footprint into South Florida before the 2026 season, hoping to snag that vaunted old/transplanted folks demographic.

DADGUMMIT YOU JUST GOT BOWDENED, PITT. This was by all measures an even game, though not a very pretty one to watch, so both teams slot in at this spot. Ten of the first eleven drives in this game resulted in punts, and the lone blip there was an Akron interception in Pitt's red zone. The only reason Akron was there to begin with was because Pitt fumbled the preceding punt. I'm going to watch this game every Christmas season, since it just gets me in to the Spirit of Giving.

the new pornographers - the spirit of giving (via melladomena)