Finally, September is over. Let the real games begin!

Share All sharing options for: ATVSQBPI Finishes Its Cupcakes

Week 5 was the last week of college football's virtual preseason. Nothing against the month of September, as bad football is better than no football, but most teams spent the month avoiding real competition, capped off with last weekend's complete stinker of a lineup. The real football starts now.

However, it is worth looking at Week 5's numbers just to see how badly Anthony Jennings broke the chart: 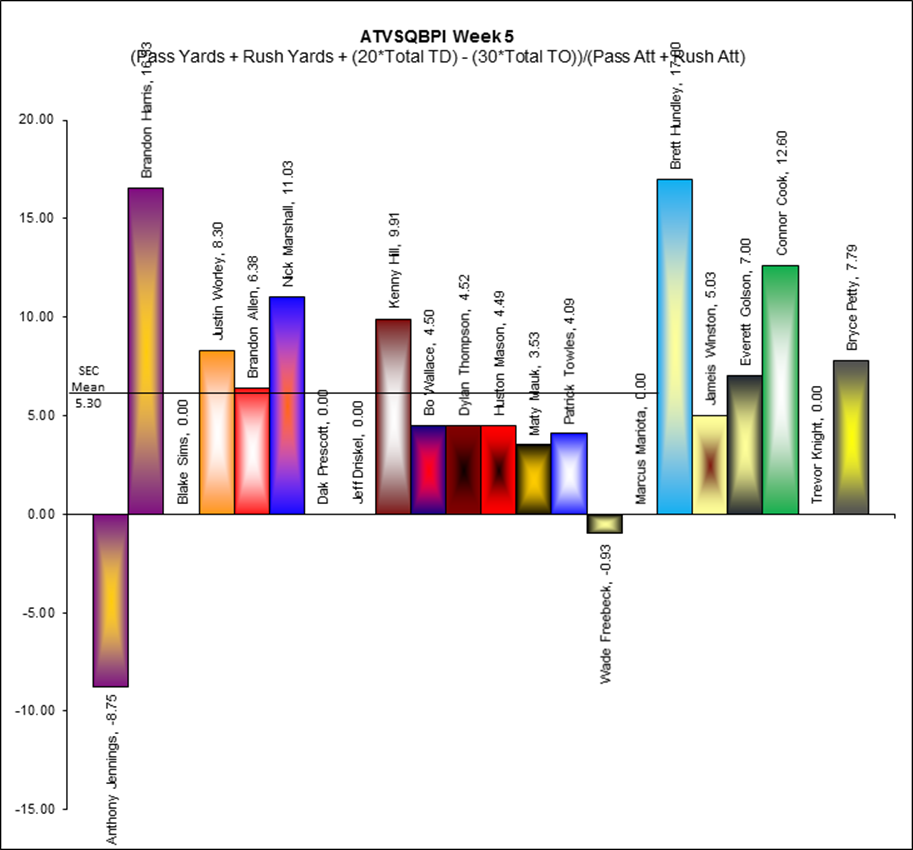 That's not an error. Brandon Harris posted a 16.53 ATVSQBPI, by far the best score of any SEC passer this week, and Anthony Jennings posted a -8.750, which is beyond terrible. We've covered this already, but you really see how bad of a game Jennings had when put in the context of the whole SEC. Brett Hundley may have crawled his way back into the Heisman race by doing terrible, terrible things to Arizona. Hide the kids. Those numbers are NSFW.

Really, when Justin Worley is putting up one of the best weeks, you can safely throw out this one. Play time is over, now things get real. Though, in Worley's defense, he put up those numbers against Georgia, who is supposed to be good. 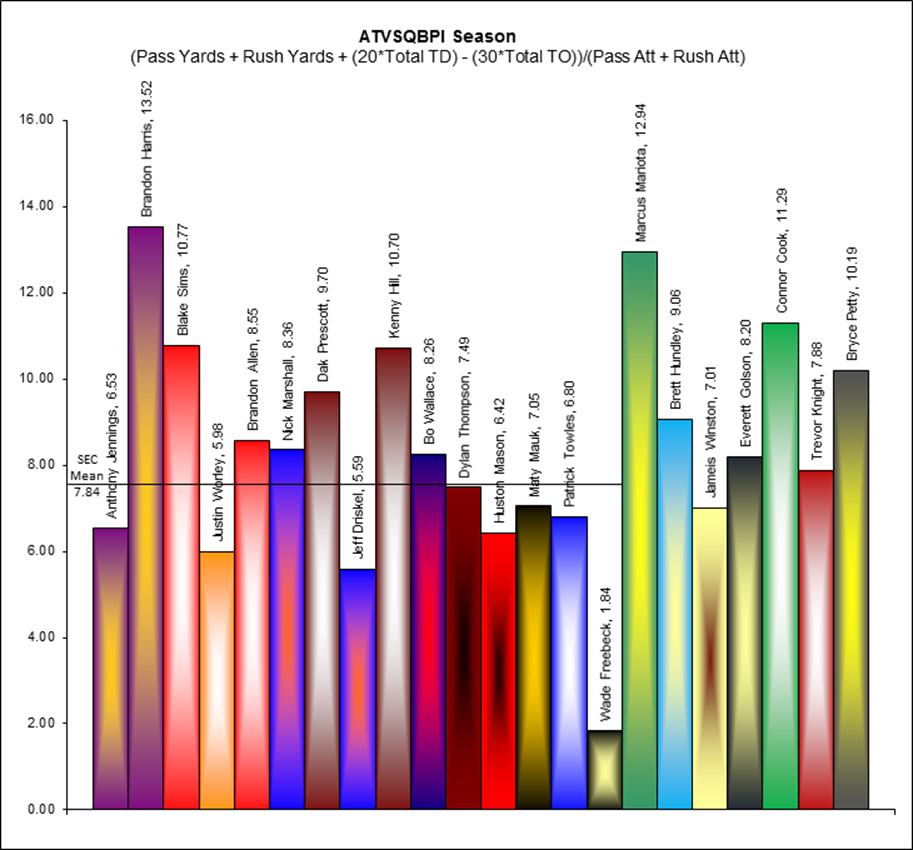 We're still not looking at conference numbers yet because we don't have enough games, so these overall season numbers are a tad misleading due to a prevalence of cupcakes. Still, it's nice to Brandon Harris with the biggest bar, isn't it? Blake Sims is quietly performing on Kenny Hill's level, thanks to a strategy that can be summed up as "throw it to Amari Cooper as often as possible." Hey, I'm not knocking it, do what works.

On the national scene, Marcus Mariota is working on his Heisman speech, and Jameis Winston is quickly falling out of the race. Winston is being outperformed by Trevor Knight and Everett Golson, two pretty good quarterbacks who we did not expect to have a higher ATVSQBPI than the defending Heisman winner.

I'm not sure which of the three Vanderbilt QB's we should be tracking as no one is doing all that great and they seem to be splitting time almost equally, but Freebeck is their most recent victim, so he gets the nod. And his numbers are predictably awful. Speaking of predictably awful, one final ATVSQBPI farewell to Anthony Jennings: 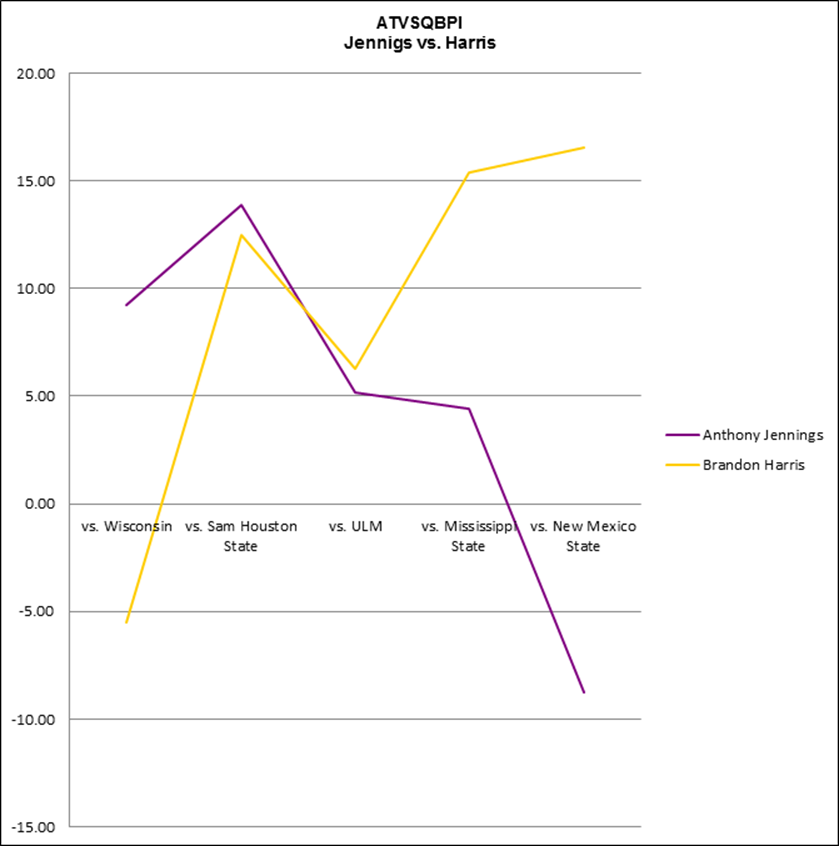 This is a week by week look at LSU's ATVSQBPI by player. There's not a whole lot I can add other than: this is what regression looks like. That's how an incumbent loses a starting job, in one chart. As this is getting perilously close to mean-spirited piling on, let's move on and not speak of this again. 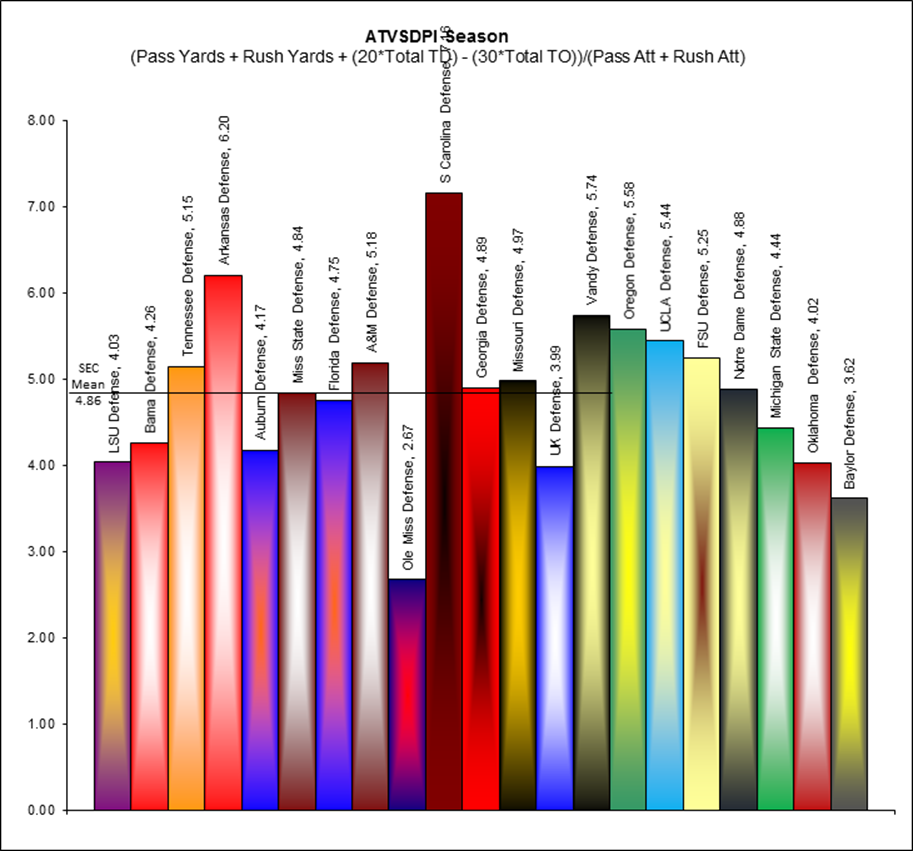 But look who is on their heels: Kentucky and LSU. Kentucky's quality is probably a bit closer to their 6.26 number they posted against Florida, and who the hell knows with LSU? The Tigers have dominated bad teams and then gotten completely destroyed by MSU. The tigers aren't 8.19 bad, but they likely aren't 4.03 good. LSU posted a 5.13 against Wisconsin, and maybe that's the "true" level. We'll see. There is some massive variation going on.

Elsewhere, South Carolina is attempting to set records for defensive futility. The Cocks actually had their best defensive game of the season against Mizzou, a 5.07 ATVSDPI. They've already cleared 8.0 twice. The big story right now is A&M's defense threatening competence. A 5.18 ATVSDPI is above the average, but not by a concerning amount, and A&M certainly has the schedule excuse. If A&M can play league average defense all year, they are a national title contender, as they will go as far as Sumlin's offense can carry them. We'll learn a lot about A&M this week against MSU, whose defense is no slouch and whose offense tore through LSU's defense like tissue paper.

Actual good football this week! Then we'll see if these numbers hold up or if they are just an illusion of scheduling.