What can I say? It was an odd week.

Share All sharing options for: 2014 Breaks ATVSQBPI in Week 1

Welcome back to another year of using our own QB rating method to rank the SEC quarterbacks and some of our national contemporaries. For those of you that forgot, here's a brief refresher on how to calculate ATVSQBPI.

If you don't want to read that, just know that it is modified yards per attempt, including rushing. We rank a QB on how many yards he is worth each time he calls his own number. ATVSDPI is applying the same formula to an entire opposing offense's production. It is like modified yards per play allowed. On offense, the higher the number the better. On defense, the lower.

Let's take a look at Week One. 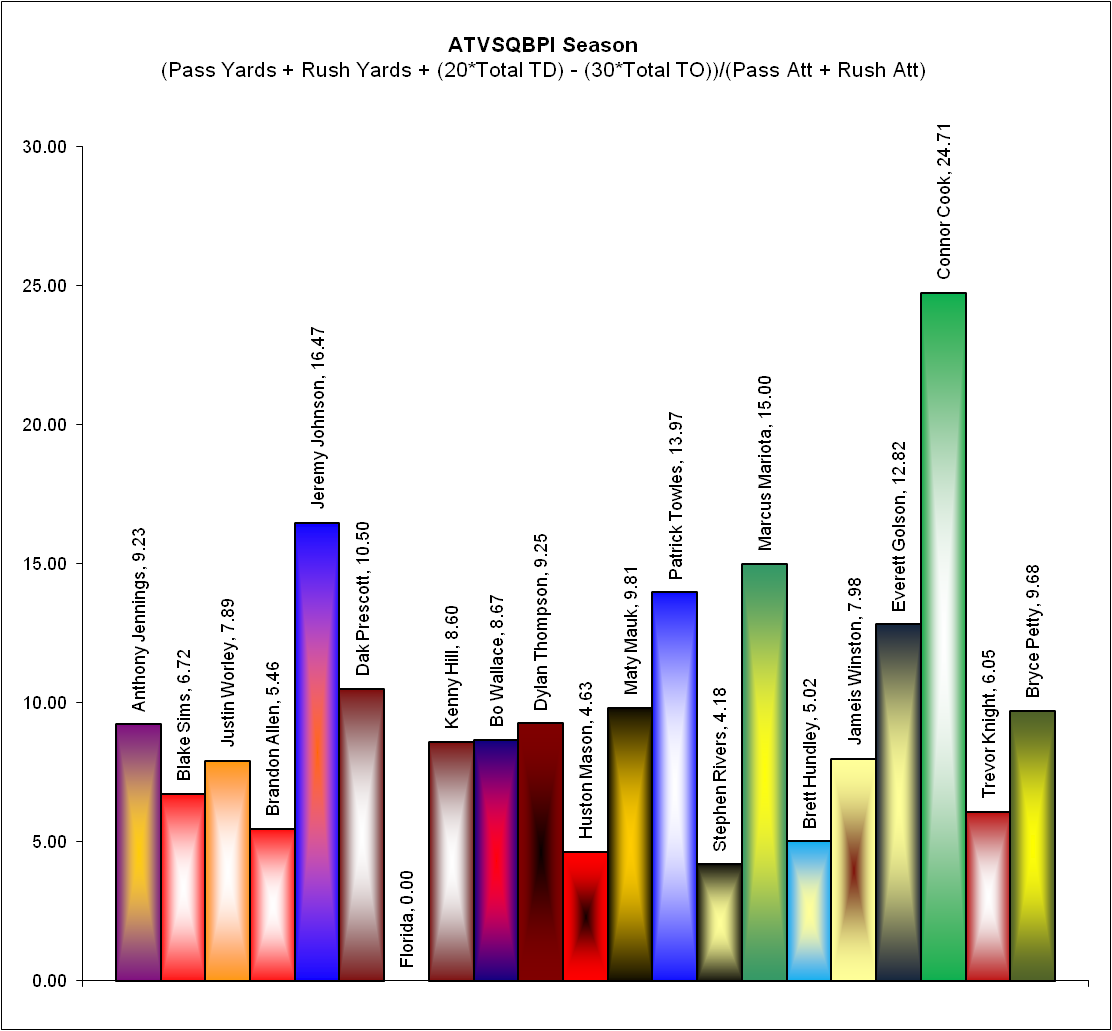 There's Connor Cook breaking the scale. Don't read too much into that, as that was against Jacksonville St. However, look at Jeremy Johnson's impressive debut for Auburn. Now, Arkansas is not a terribly good defense, but it is certainly more stout than Jacksonville St. In case you are wondering, Nick Marshall had a 6.36 rating as Auburn went from a tie game to a blowout win. Which goes to show, ATVSQBPI isn't everything.

Kenny Hill's 511-yard explosion rates well, but not nearly as high as some of his SEC competition. What's the deal? That was a near record-setting performance. It also took him 60 pass attempts and 7 rushes. Though A&M tired out the scoreboard operator, those TD's largely came on the ground, not from Hill. So his performance rates well, but not spectacular.

Bo Wallace rated higher despite his three picks. Dylan Thompson, in a losing cause, put up better rate stats than Hill, but not by much: 150 less yards on over 20 less attempts. This is a flaw in ATVSQBPI, or any rate stat, over just one game. Despite the lower rating, I'd take Hill over Thompson or Wallace, just like any other rational person.

Anthony Jennings is a bit more different. He only had 237 total yards, but on just 30 total attempts (passes plus rushes). He had about half the yards on half the attempts. He also scored twice and didn't turn the ball over. Now, a few big plays distort Jennings' numbers, even more so because he had so few attempts, but he has a strong case for the best performance in the SEC this weekend. 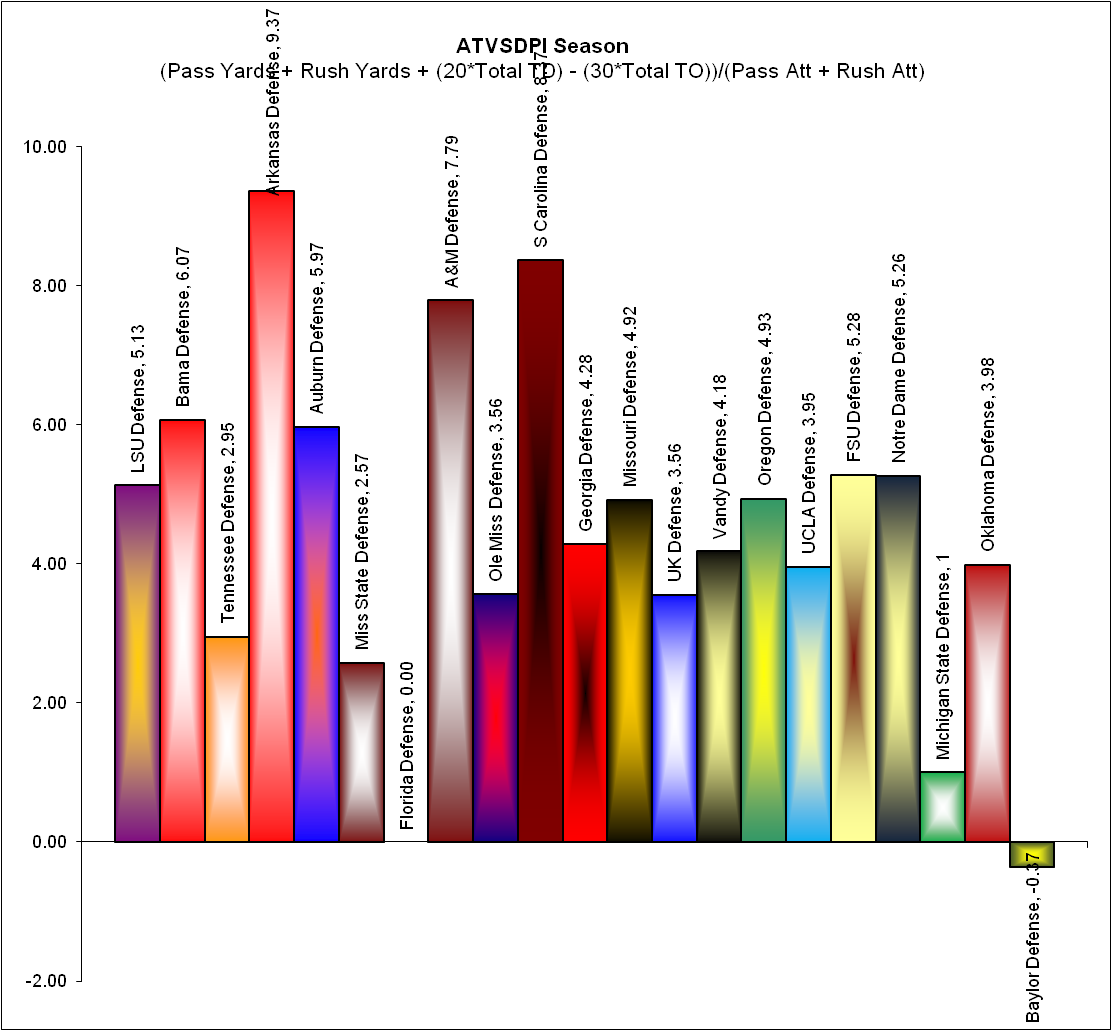 Turning to defense, let's all marvel at Baylor's negative number. Baylor allowed 94 passing yards, -24 rushing yards, and forced three turnovers. I know SMU stinks, but June Jones is an offensive guru. He can usually put up points while losing by 30. This was a stunning performance.

Some of the usual suspects turned in our worst defensive performances of the week, including A&M and USCe trying to set defense back a decade. But the real shock is seeing Alabama allowing over six modified yards per play. West Virginia isn't incompetent offensively, but we're simply not used to a mediocre team moving up and down on a Tide defense like that.

LSU rates about normal, buoyed by two turnovers. But the real winner here is Georgia, who shut down a potent Clemson team. That's how you play defense. If the Dawgs can play defense now, the rest of the SEC is in trouble.

*Poseur's Late Edits: Two things I did not mention and absolutely should have. ONE. All of the legwork on compiling the numbers and these fancy looking charts is performed by ORtigerfan. I literally would not do this without him. TWO. If you want to see a team/player added to the chart, now is the time to ask.