Today I learned that bearcats are real animals.

1. The Bearkats have every intention of being a fly in the ointment for LSU's tune-up period before the Tigers head into conference play. Head coach K.C. Keeler stated as much during the build up to the game this week, and that happening isn't outside the realm of possibility. This is not meant as a statement of defeatism, but one of caution. I am a worrisome and cautious person by nature. Ever since Michigan dropped a game to then-FCS Appalachian State, I have been on edge every time LSU has played a team it was supposed to beat handily, especially FCS schools. I also check behind closed shower curtains whenever I use the bathroom, because you never know when Chris Klieman and his North Dakota State team are lurking behind it, waiting to give you a swirlie.

2. Our foes feature a no-huddle, air raid offense installed by offensive coordinator Phil Longo. Last week starting quarterback Jared Johnson had one less completion (31) than Alabama State QB Daniel Duhart had attempts (32). The Kats have eclipsed the 500-yard mark in both games they've played this season, putting up 685 (396 through the air!) on the Hornets last week.

3. So, on offense, Sam Houston State is ready to play. While LSU's talent and depth on defense will certainly affect their offensive attack, Sam Houston will likely stick to their plan of chucking the ball around the field. Personally, I think this is a good thing because it gives LSU's secondary game speed reps that it didn't necessarily get last week against a limited Wisconsin passing attack (get well soon, Joel).

4. On the other hand, the Bearkat defense gave up 402 and 624 yards to Alabama State and Eastern Washington, respectively. That bodes well for an offense that was asleep for most of the game on Saturday.  I'm optimistic the offensive line can continue playing at the level they did during the second half against Wisconsin and build upon it. Terrence Magee could use Saturday as a chance to get himself going after a rough day against Wisconsin, though this could also be chalked up to the offensive line's own rough day. To see both come out firing on the first possession would be great.

5. Hopefully this means we can also test some depth and youth at the skill positions. We all expect to see Leonard Fournette, but what about Darrel Williams? Barring any plans to redshirt him, it would be nice to see. Anthony Jennings targeted Travis Dickson and Desean Smith on Saturday, but what about Colin Jeter? Obviously Brandon Harris and the bevy of young wide receivers will be a factor here too. Will Melvin Jones get to break a facemask? I sure hope so.

6. Sam Houston State's mascot, the bearcat (stylized as "Bearkat" by the university), actually refers to a real animal native to Southwest Asia known scientifically as the binturong (Arctitus binturong, to be specific). While they might not be worthy of their own BuzzFeed post, I think they're kind of cute. 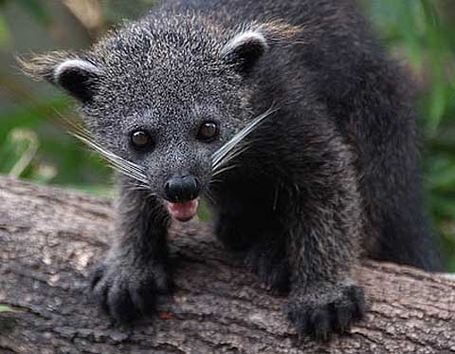 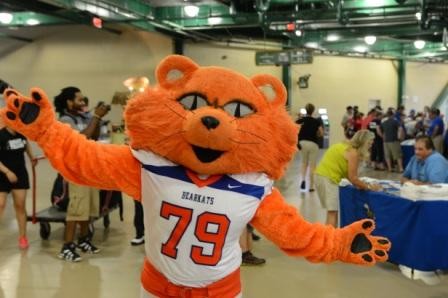 8. Head coach K.C. Keeler is no stranger to success at the FCS level. He won the 2003 FCS National Championship at Delaware, as well as leading the Blue Hens to two FCS Championship Games in 2007 and 2010. The man can recruit and coach very well, and I expect him to do everything he can to have Sam Houston State ready to play against LSU short of bringing a live tiger to practice. Maybe after the game he'll wish he would have.

9. The Kats are also coming off the most successful period in their history, going 31-10 from 2010 to 2013 under the watch of Willie Fritz, now head coach of Georgia Southern. Fritz led Sam Houston State to two consecutive Southland Conference titles and FCS Championship Game appearances in 2011 and 2012 (they lost both to North Dakota State). Their 2011 semifinal game against Montana gave us this wonderful moment: 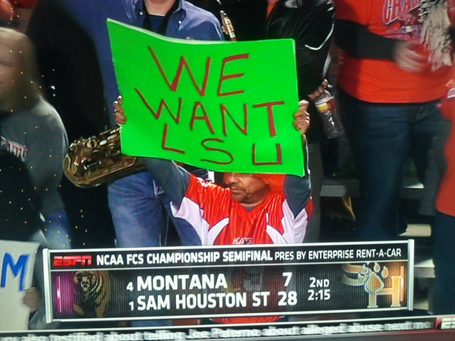 10. I'm not sure if the powers that be within LSU's Athletic Department added the Bearkats to the schedule before that happened, or if they ever saw it, but I sure hope that's what brought it on.