Congratulations to Purdue on their imminent move to the MAC!

Share All sharing options for: Race to the Bottom Power Rankings: Week 2

The Race to the Bottom Power Rankings for Week 2 feature a new worst team in college football and several new faces! Remember, these are by no means authoritative, can change from week to week, and are not meant to be taken seriously. Last week's rankings can be found here.

Now, on to the rankings and our newly-relegated members...

Vanderbilt has regressed to the mean after their last three seasons. I went to the LSU-Vandy game in Nashville with the band during the 2010 season, and what stuck out to me most was not how angry their fans were after the game, but how apathetic they were. A friend of mine who attended Vanderbilt didn't even make it to the game despite some friends of ours making the trip from Baton Rouge for it. LSU fans easily made up 70-percent of the crowd in attendance. My most vivid memory of the game itself is Jordan Jefferson throwing a pass out of bounds and hitting the play clock square in its center. In a lot of ways it felt like a glorified scrimmage, because Vandy's fans didn't seem to care. I suppose that's what happens when your new head coach is a turkey insemination hobbyist who got hired rather quickly after your former head coach retired abruptly.

The Dores went 2-10 that season, then they hired James Franklin, who changed those expectations. Vanderbilt fans don't necessarily expect to win, but they expect respectability. Franklin's replacement, Derek Mason, seemed to have the pedigree to maintain Franklin's success. So how did the fans feel about the Commodores' 2014 performance against their permanent cross-division rival? You know, the one where they gained only 165 yards and gave up 547? The one where their leading passer's completion percentage was only 24-percent? Commenter VandyTiger PhD provided me with an answer as I ate breakfast on Sunday morning. This is unaltered, and I'm using it with his/her permission:

When you do your week two inverse rankings, be sure to put Vanderbilt dead last.  In fact, put some sort of chasm between them and whomever you decide is #2.  For example, put a woman's tennis team between Vanderbilt and FIU.  There is no defending this shit anymore.  The coaching staff has the best raw talent of any Vanderbilt team prior, but in turn they have given us a dumpster fire the likes of which I've never seen.  I think I'm a pretty good authority on terrible football with the decades of this I've endured; and I say, without any conviction or hyperbole, that this is the worst football team I have ever seen.  Yes, even worse than those 90s Jets teams.  Yes, worse than the "Aints" era of football.  Three fucking points of offense in two games.  Three.  Inexcusable.  By the way, Temple lost to Navy, which makes last week look even worse.

I'm not sure what else I can say about this. Vanderbilt's 2014 went from "this is kind of funny" to "sad clown" in a matter of two weeks, which is as impressive a tumble as I've ever seen. There's time for things to change under Mason's watch, but I don't think the optimism surrounding the program exists anymore.

How does one lose to an FCS opponent at home? It's pretty easy, all things considered. Ever since Appalachian State burst the bubble in 2007, several Power 5 schools have accomplished the feat, including some this year. What isn't a marvel is that Miami did it, it's how they did it. Namely, the Redhawks outgained the Colonels 445-280 and scored a touchdown after only their third play from scrimmage. Eastern Kentucky promptly held Miami to a field goal for the rest of the game, bending but not breaking. The Redhawks' kicker had three FG attempts, and made one. One could blame the kicker for not succeeding on his attempts, thereby giving Miami some momentum. But the blame here rests squarely on the shoulders of the offense, who turned the ball over an astounding six times, in a move that I'm calling "philanthropy at its finest."

This is Las Vegas after all, what happens there stays there, and I'm not one to question it. From examining the box score and stats, it's hard to say what led to this game being such an awful win. UNLV gained lots of yards, but a fourth quarter safety gave Northern Colorado two points and the ball in a game that was 13-10. UNLV's saving grace was a missed Northern Colorado FG attempt, after which neither team really threatened on offense. Some games are funny-bad, and some games are just bad. This one lies between the two poles, and could have been pushed either way depending on the outcome and the point differential.

This game was so bad that June Jones resigned the Monday after. The Mustangs had 274 yards of offense but only eight yards on the ground, par for the course in the run and shoot, though not great. When you look at the 245 rushing yards a very competent North Texas team gained, it looks worse. "Complete win" and "complete beatdown" aren't necessarily interchangeable terms, but in this case they are. North Texas scored touchdowns on both offense and defense and was very good on special teams - 5/5 on field goals, which is impressive in college - while also holding on to the ball. SMU, on the other hand, turned the ball over five times. The drive chart speaks for itself. 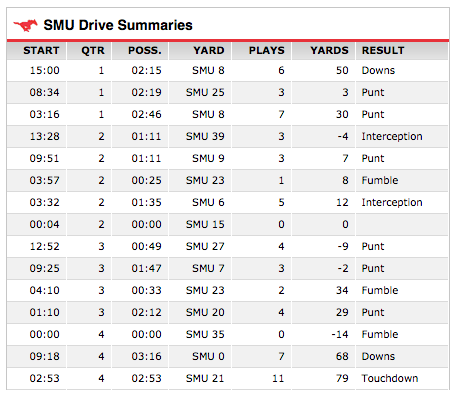 The most impressive part of this game? North Texas doing this while also taking 15 penalties for 139 yards. If June Jones' resignation is any indication, things are about to get much worse for SMU.

For maximum reading experience, please listen to the following video while reading this entry.

Lost to the Irish

Where is Al Borges? 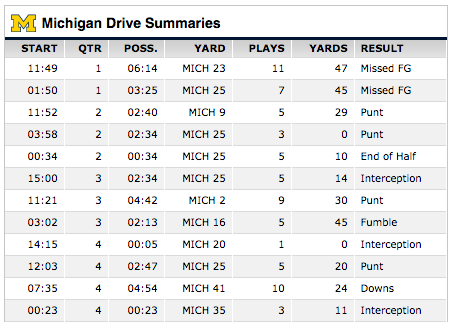 This drive chart is sad

At least they can punt

Notre Dame handed Michigan their first shutout since 1984 on Saturday, in the final game of the series as the Irish begin their scheduling deal with the ACC. Yes, the Wolverines outgained Notre Dame 289-280, but a statistic like that is meaningless when your offense turns the ball over four times and never crosses the into the red zone. In fairness, Michigan's offensive talent isn't exactly prevalent, and this is Devin Gardner's first year of actually having to identify the Mike linebacker in his life. Unfortunately the growing pains could be too late for Year 4 of the Hoke regime, it looks like Michigan could be headed for the haughtiest 6-6 record and Heart of Dallas berth ever.

McNeese State is not a bad team, and Nebraska more or less played them square in Lincoln on Saturday. It took a long Ameer Abdullah touchdown with :20 left on the clock for Nebraska to break a tie with the Cowboys, who had most recently tied the game on a field goal. I'm not sure if this game says more about McNeese or Nebraska. The Huskers got the win in less than convincing fashion, and they certainly can't feel good about it. But they'll likely bounce back en route to a nine win season and bowl appearance, allowing Bo Pelini to spend more time with his cat during the offseason.

RELATED: I'm just going throw it out there and say the B1G Runners-up* should play the Southland Conference Champion in a plus-one regardless, because at this point we'd likely get another good game to watch.

The score of this game going into the fourth quarter was 34-7. During the final period, Kansas gave up 21 points and were a successful onside kick and touchdown away from what would have been the most hilarious collapse of the 2014 college football season thus far. Such a feat would have added to Charlie Weis' legend, and it's a shame we were robbed of it. KU plays at Duke and hosts Central Michigan before jumping into their conference schedule, so there's a legitimate chance they could go 1-11 this season. Maybe Charlie will add to his legend after all.

They outgained us on offense,

And won the turnover battle,

But the Seawolves could not 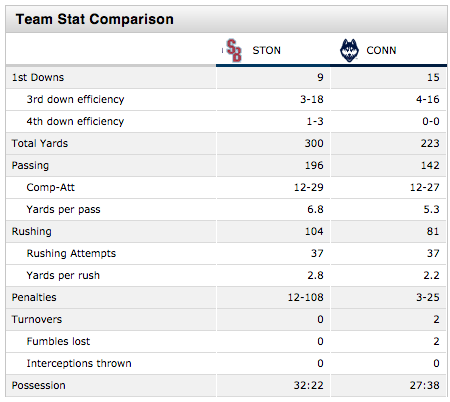 It was Diaco's first win!

But he did not make a sound

In the throes of victory, 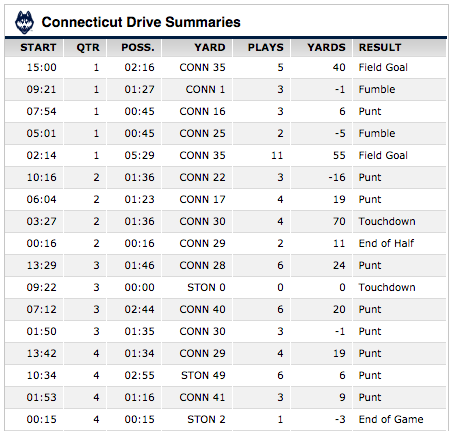 At the postgame presser,

Bob sat on his stool

Another week, another game against a MAC school. It's only Week 2 and Purdue appears to have reached peak Purdue-ness, dropping to this game to Central Michigan in pretty routine fashion. That's what makes this bad. If this were another year, the scores may have been reversed, and this game would have been a simple tune-up before the Boilermakers headed into conference play. Now I suspect it's backwards, and MAC schools are scheduling Purdue to get ready for their conference tilts. I, for one, look forward to Purdue joining the MAC in 2018, because they've kind of been in that ballpark for a while now.

Iowa was down 13-3 heading into the final quarter of this game, punting five times, missing three field goals, and coughing the ball up on a fumble before ripping two touchdowns off to win. They did this having twice as much total offense as Ball State, which makes the whole thing counterintuitive. Iowa will inexplicably go 8-4 this season and this game will not be counted against Kirk Ferentz's record. No one understands how or why, but he will get a contract extension or pay raise in January 2015. The world is cruel, but it hums along regardless of your opinion of it.