Hey look! Another series against an Ivy League Team.

Another year, another baseball series against an Ivy League team.  The Princeton Tigers come to town this weekend for a three game series, making it the 6th season in a row that LSU has played a team from the Ivy League.  During that time span, LSU has only lost two games to Ivy League teams, once to Princeton in 2011 and Yale in 2014.  Because the Ivy League baseball schedule is weird, this is Princeton's first series of the season.  Anyways, let's take a look at the other Tigers from New Jersey.

Princeton lost their best player Alec Keller, but they have a few solid bats returning in the lineup.  Danny Hoy is the biggest power threat for Princeton.  Hoy hit 3 home runs and 9 doubles last season, so he's got some pop but it's nothing overwhelming.  Baer was the second best hitter for average last season, and Belski was a solid if unspectacular at the plate.

The biggest thing to keep in mind for the Princeton lineup is that it was extremely young last season.  Four of Princeton's everyday starters last season were freshman, Baer and Belski included.  The rest of the team is returning juniors and seniors, so the team has plenty of experience.  Princeton should be improved all around this season in the field and in the lineup, but they remain a very over matched opponent against the LSU arms.

The Princeton arms have the same story going on as the bats.  They lost their ace Michael Fagan (who got the win against LSU in 2011), return a bunch of experience, and were a young bunch last year that should improve this year.  Power and Smithers are both sophomores who should improve on their numbers from last year, plus Strieber and Mingo give them an upperclassman presence in the starting rotation.  Bodurian will get the nod from the bullpen in tight situations and should be solid in relief.

Again, there is nothing scary here at all for LSU.  Princeton was prone to walking guys last season (170 walks in 40 games), so the batters need to be patient at the plate and wait for the Princeton pitchers to give them something to hit. 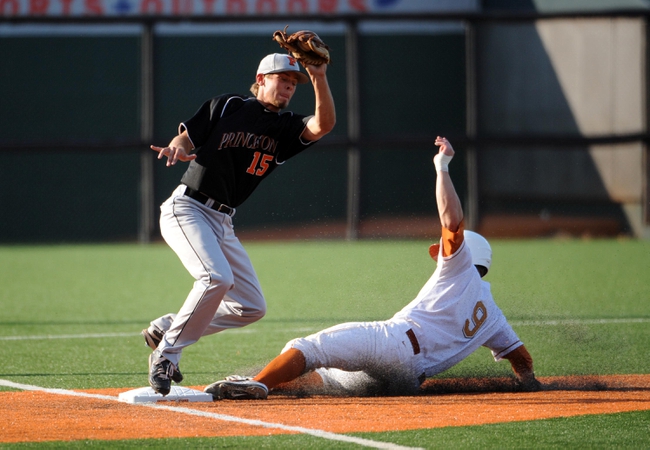 Overall, a pretty solid uniform for me.  They don't have the most attractive colors, but they don't try and do anything crazy with patterns or funky designs.  I dig the hat a lot.

Keys to the Weekend

Starting Pitching: LSU's starting pitching has been solid to start the season, but they should be dominant against Princeton.  Princeton only has one returning player that hit over 300 last season, and nobody on their team really scares you with their power.  Throw strikes, let your defense play behind you, and the pitchers should have a good weekend.

Swing Away: There is nothing about the Princeton arms that should scare the LSU lineup.  Expect them to swing away and hopefully keep up the momentum from the series against Boston College.

No Injuries: Just play smart and be alert in the field and at the plate.  Beau Jordan suffered an unfortunate meniscus tear against Boston College, and we don't want to see anything else like that.

Bullpen Management: Things could get screwy with the bullpen this weekend.  LSU is scheduled to play four days in a row, but there is a possibility of a double header on Saturday due to weather.  If that happens, LSU's pitching depth could be tested a bit, especially if any of the starters struggle.

LSU wins the weekend series going away.  There is nothing about Princeton that jumps off the page, and LSU clearly best them in every phase of the game.  LSU should sweep the series.