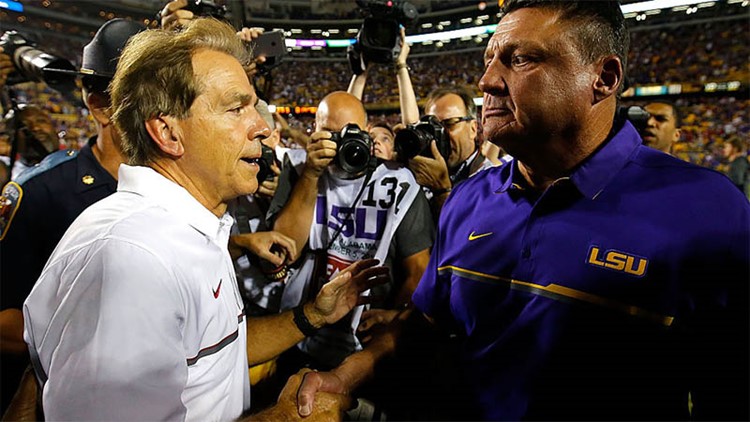 "Some folks are born silver spoon in hand...."

It has been seven long years since the LSU Tigers have last beaten the darlings of the college football world, the Alabama Crimson Tide.

As if getting a historic win over one of the best teams in the country once on the road isn't monumental enough, those 2011 Tigers were forced to face that great team yet again to stake their claim to the National Championship, despite the fact that the Tide hadn't even won their division or conference.

The media and pollsters gifted Nick Saban a second bite at the apple, and his team responded by "restoring Order" in the Louisiana Superdome to render the historic November clash of #1 vs #2 ultimately meaningless.

The following seven seasons have seen Alabama win four SEC titles, three national titles, and they have made the College Football Playoff every year since it's inception in 2014, including last year when they once again failed to win their own division or conference.

There is no more entitled program or fanbase in all of sports. And it is very likely that even if LSU were to beat Alabama this weekend, The Tide would once again rise above the standards that all other teams are held to and be given yet another invitation to the Playoff anyway.

But if any team can rally around such disrespect and bias, it is the 2018 LSU Tigers. 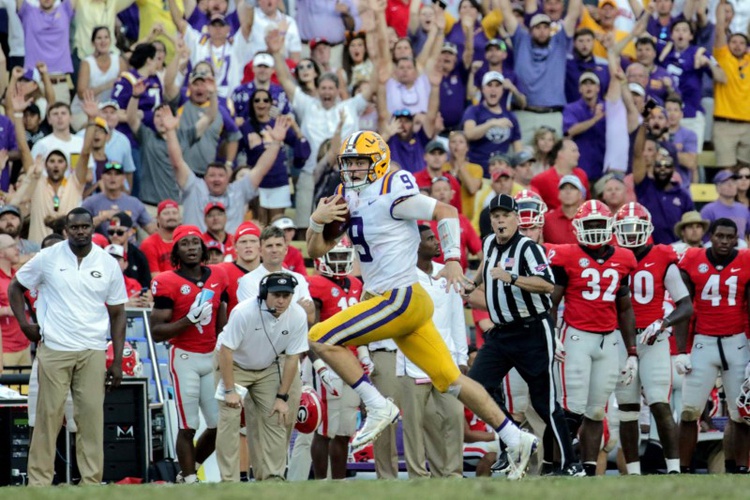 THEY SEND YOU DOWN TO WAR

Without question, no team has accomplished more at this point in the season than LSU.

Alabama has certainly been impressive, beating their opponents by an average score of 54-15. But The Tide have only played one ranked team all season, a home game against #22 Texas A&M, who is now ranked #25.

LSU, on the other hand, has clawed their way all the way up from #25 into the top 5 twice this season, and is currently ranked #3. The Tigers have done so by going 4-1 against ranked opponents, including three wins over top 10 teams, two of which were away from home. The sole loss was on the road to #22 Florida, who now sits at #11 in the CFP Rankings.

Despite the mettle and resolve LSU has showed week after week, not to mention the outright talent and athleticism this team obviously possesses, Alabama opened as a 14.5 point favorite over the home Tigers, making the #3 team in the country the worst underdog in Tiger Stadium since Gerry Dinardo's final season in 1999.

But the gauntlet this team has run through has made it undeniably clear that this team repeatedly responds and plays their best football when the oddsmakers give them no chance.

That is due primarily to the grittiness and determination on constant display by the obviously seasoned, yet somehow still a first year starter, quarterback Joe Burrow. The coach's son from Ohio that was the favorite of former rival Urban Meyer has already become one of Louisiana's favorite sons in the short time since he arrived in Baton Rouge.

While his numbers up to this point won't earn him any postseason honors, he has won over the hearts and minds of Tiger Nation by proving over and over in the biggest moments on the toughest of stages that he can make any throw or play when the game is on the line in the most clutch situations.

Burrow has the same indefinable fire and leadership as Meyer's protege from his days in the SEC that LSU fans know all too well, Tim Tebow.

While no one would mistake the games of the two, there is an undeniable quality about both players that inspire their teammates to rally together and play their best football when it seems like the whole world is against them.

The Tigers now find themselves facing the longest odds they have seen all season, against without question the best team they will face all season, and perhaps the best player in all of college football. 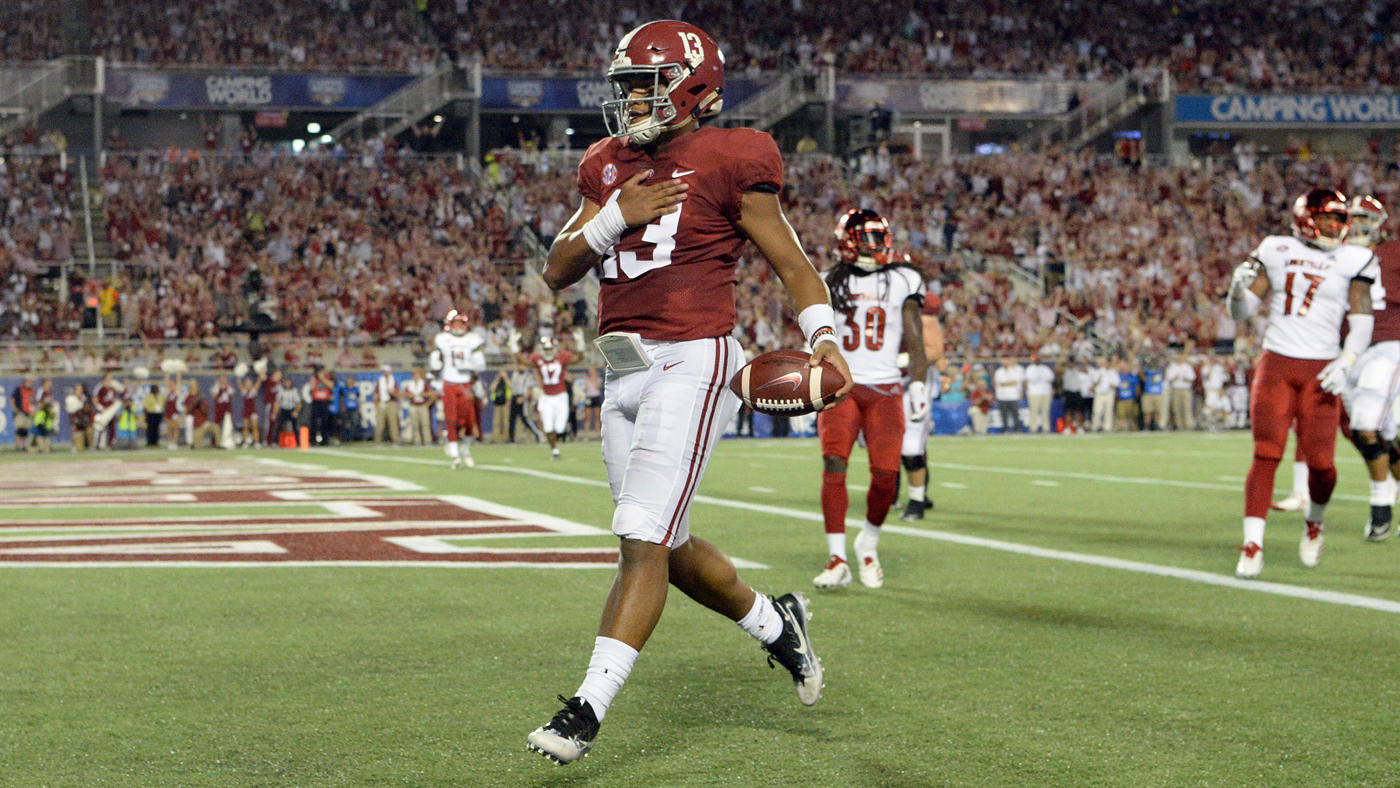 DON'T THEY HELP THEMSELVES

While Burrow has scratched and clawed his way to become the face of the LSU Tiger program, Alabama's sophomore sensation Tua Tagovailoa has made it look easy as he has established himself as far and away the favorite to take home the Heisman Trophy in December.

Since taking over as starting quarterback for Jalen Hurts at halftime of the National Championship Game last season, Tua has taken the college football world by storm.

Hurts, who had gone 26-2 as starting quarterback since winning the job as a true freshman, leading Alabama to two straight National Championship Games, struggled in that first half as Alabama fell behind 13-0 to the undisputed SEC Champion Georgia Bulldogs. Then a true freshman himself, Tua came into the game and never looked back, throwing three touchdown passes, including the game winner in overtime to give Nick Saban his sixth national title.

After much discussion throughout the offseason, Tua was named the starter over Hurts going into the season. That move has transformed Alabama from a workmanlike, physically imposing steam engine locomotive of a program that wore its opponents into submission for a decade, into a high octane bullet train that overwhelms its opponents leaving them tattered and ripped to shreds by halftime, usually before the first quarter is even over.

This Alabama team has been up by at least three touchdowns at halftime of every game this season, and by at least 30 points in all games but two this season. This is primarily due to the play of Tua, who has led an aerial assault throwing for over 250 yards a game and 25 touchdowns, without a single interception, while completing over 70 percent of his passes. All while playing almost strictly in the first half, and not at all in the fourth quarter.

For the first time in this incredible run by Saban in Tuscaloosa, he has a transcendent superstar that is not only the face of the Tide program, but all of college football.

If LSU hopes to finally turn the tide in this series, Dave Aranda and his ferocious defense will have to find a way to slow down the inevitable Heisman Trophy winner to do it. 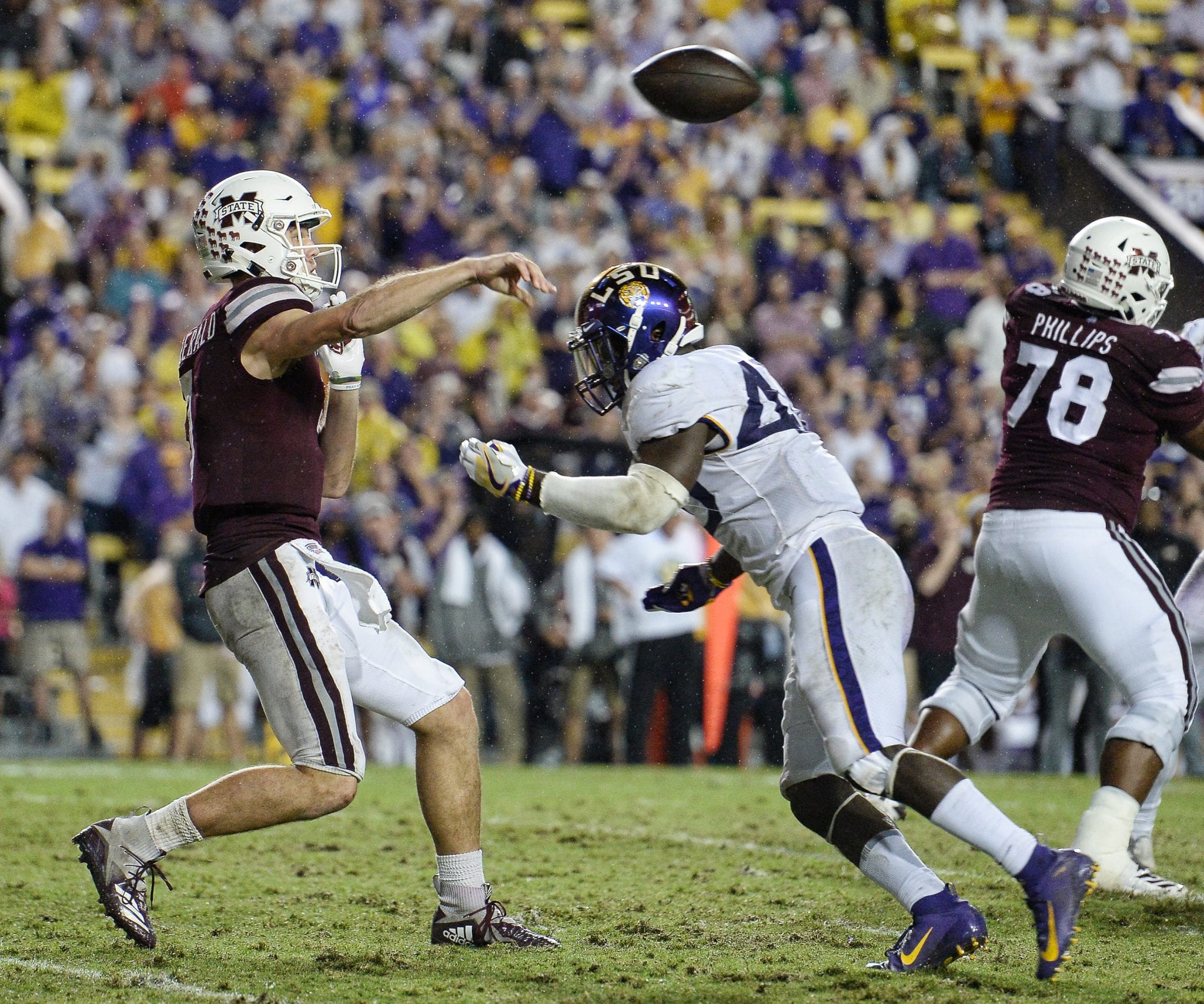 THEY POINT THE CANNON AT YOU

As if beating Nick Saban's annual playoff juggernaut for the first time in seven years won't be difficult enough, the SEC officials, and offices, have decided to give Saban's Tide an additional boost, as usual, to ensure that Order is maintained in this series.

What is different about this potential game altering penalty, however, is that the call won't happen on the field Saturday night. This time, the flag was thrown and replay confirmed two weeks ago in the final minutes of the Mississippi State game. Without getting into the merits of the play and review, as it was certainly a judgement call, the indisputable fact is that it was a huge decision that will have an immeasurable impact on how the biggest game of the season plays out in Tiger Stadium.

As #3 LSU takes the field against #1 Alabama, the Tigers will be without superstar linebacker Devin White for the entire first half due to his ejection for targeting against Bulldog quarterback Nick Fitzgerald.

White is not only LSU's best player and unquestioned lock of a top 10 pick of the NFL Draft in a few short months, but he is also likely the biggest key to slowing down Alabama's best player as well. This is obviously a huge advantage for Saban and Tua, as getting out to quick starts and huge leads has been the common theme in the dominance that Alabama has displayed over every team they've played thus far.

But there has been another, perhaps more drastic effect of that penalty that has the potential to impact the game in a way that few could have predicted, and certainly none would have intended.

The backlash over losing such a key player in such questionable fashion has been universal. Every single citizen of Tiger Nation has been galvanized in the understanding that Alabama is, and has always been, given every advantage in their plunder of the Southeastern Conference and College Football as a whole.

So while one player may have been successfully negated for 30 minutes of the game, one hundred thousand voices have been awakened for weeks and will relentlessly roar into the night sky of Death Valley with the single purpose of drowning out The Tide on Saturday night to erase years of frustration. 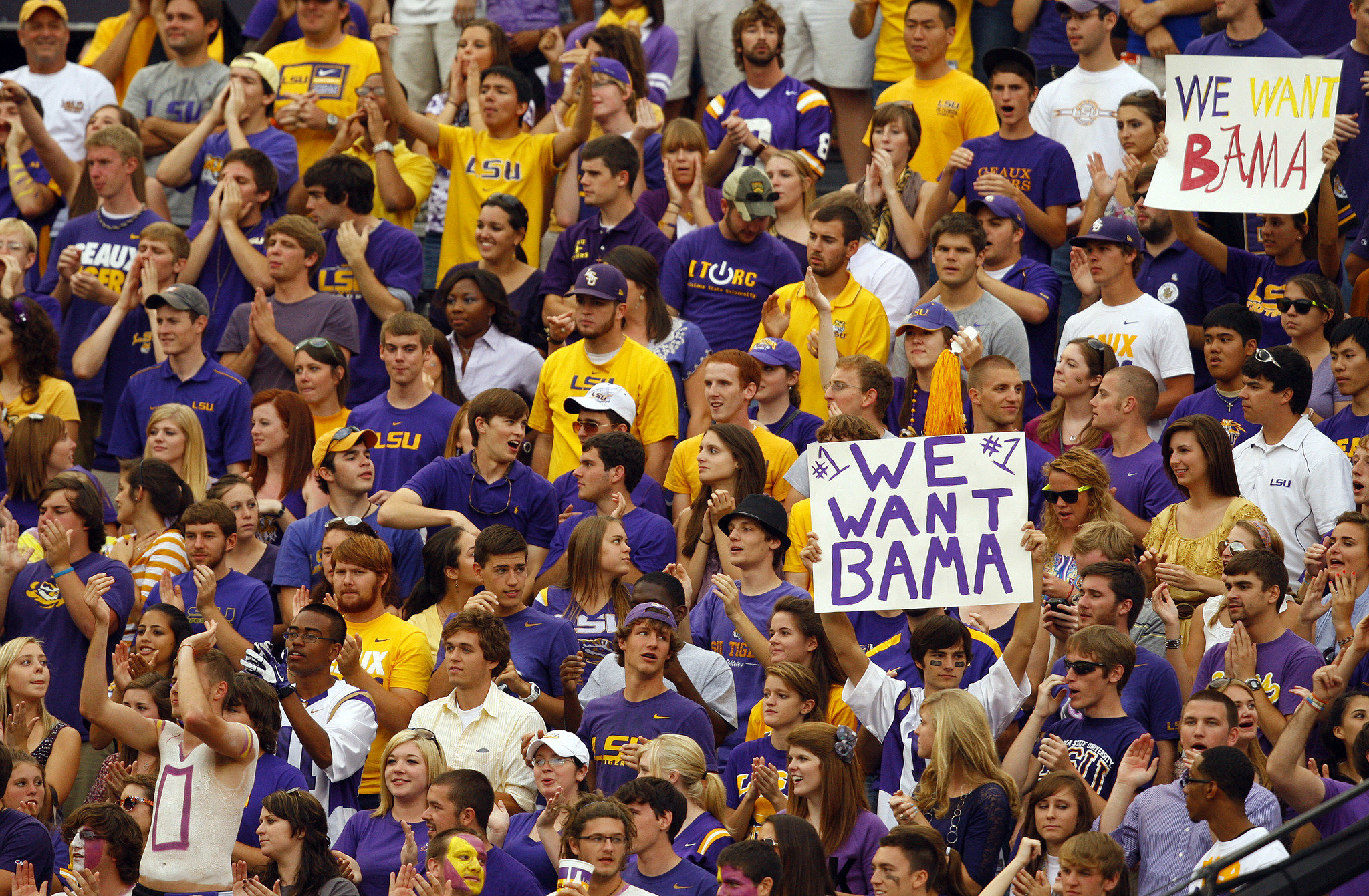 If any crowd has ever been able to make a difference in a game, Tiger Nation has made a habit of doing so under the Saturday night lights of Death Valley.

Particularly against The Crimson Tide since Nick Saban returned to college football, the sleeping giant of Tiger Stadium has not only been alive and well, but downright unruly when he returns to his former home field.

Despite being double digit underdogs every year, LSU has fought tooth and nail and likely taken years off of Nick Saban's life every time he has ventured back to the den of Tiger Nation.

Even in Saban's only two score win over LSU in 2016, which was also Ed Orgeron's first tussle with Saban as head coach of the Tigers, LSU was tied 0-0 into the 4th quarter with the #1 ranked Tide before ultimately falling 10-0.

Being a two touchdown underdog is certainly not the ideal scenario for any team in any game. But just like this 2018 LSU team, Tiger Nation has never taken well to being disrespected.

The media, oddsmakers, and apparently even the referees have totally misread this team from the very beginning. This is an LSU team with a defense that is reminiscent of the great Tiger defenses of the Golden Era, and they finally have a quarterback they can believe in and depend on to go on the attack and get the win if they can keep the game close.

Facing an Alabama team that hasn't had to play a full sixty minutes even once this season, this team will receive a jolt of energy like never before when Devin White leads them out of the tunnel to start the second half.

The crowd will be electric all night, and will reach absolute pandemonium when White is unleashed to wreak havoc on an Alabama team whose championship mettle hasn't been truly tested up to this point.

In primetime, under the lights of Death Valley in the SEC's showcase game of the season, Tiger Nation will make Nick Saban regret that he ever attempted to wake the sleeping giant, and this battle proven group of Tigers will set out to destroy the Order that has ruled college football for the past seven seasons.