A handy guide to some of the terms you’re going to hear a lot of over the next few months.

Share All sharing options for: ATVS Presents: A 2019 Football Glossary

Football season isn’t quite here yet, but football practice is. In the process of previewing the 2019 LSU team, plus the various opponents, we’re going to be using a lot of X&O football jargon. And yeah, a lot of it has been explained in the past, but quite frankly, after 10 years of writing here at ATVS, its hard to avoid self-plagiarization. Especially with schemes and opponents that have been so static over this time, like Gus Malzahn, Dan Mullen and Nick Saban (and his various cronies).

So with that in mind, I thought a glossary of some of the more common football terms that you’ll see around here in the coming months might come in handy.

Coverages are the backbone of modern defense in the era of spread and hurry-up styles of offense.

Another popular term in the modern game is pattern matching. This is a style of zone coverage where, instead of just guarding a static area of the field, defenders read a receiver’s release and base their coverage area off of that. For example, a cornerback may switch from the outside receiver he’s lined up on to an inside slot receiver based on which player releases deep.

Terms like “three-technique” or “shade” all refer to where a defensive lineman positions himself in relation to the offensive front. The terms are base on this numbered chart (with an example of LSU’s base defense):

Linemen may “shade” a technique one way or another — shift their alignment slightly — to gain an advantage in a particular situation. For example, a zero-tech nose tackle may shade slightly off the nose of the center in order to create a shorter path into one of the A-gaps but still have direct leverage on the blocker.

One Gap or Two?

Another frequent discussion is the idea of linemen playing one gap versus two. A player defending one gap is doing just that — he is attacking a single gap between two linemen and usually trying to get directly up the field. Think Aaron Donald of the Los Angeles Rams. A player defending two gaps, such as nose tackles are often asked to do in a 3-4 defense, will typically attack the offensive linemen directly. His goal is to control the blocker himself, so that the gaps to either side of him are open. Linemen who are especially good at playing two gaps will typically draw double teams.

Most of you have a basic understanding of three-man or four-man fronts, but here are a few more useful terms:

In LSU’s case, the linebacker positions are F and Bench on the outside and Mack and Rover on the inside. The F and Bench linebackers align based on the wide and short sides of the field.

An easy shorthand for keeping track of the offensive personnel on the field is a simple two-digit system that starts with the number of backs in the formation followed by tight ends. The remainder are receivers.

Counter features action towards one side of the play before a cut to the back side.

It’s become a ubiquitous phrase in modern football — slang for any team that leans pass-heavy out of spread formations. But the offense that we actually know as the Air Raid was developed in the 1990s by Hal Mumme and Mike Leach across stints at Iowa Wesleyan, Valdosta State, and the University of Kentucky. It was, essentially, a distillation of Mumme and Leach’s favorite plays from the BYU offense of Lavell Edwards and Norm Chow.

It’s an offense that has been taken in multiple directions in ensuing years by Leach and other coaches like Dana Holgorsen, Tony Franklin, Kliff Kingsbury and Neal Brown — but the origin goes back to the BYU offense that produced star quarterbacks like Jim McMahon, Steve Young and Ty Detmer through the 80s and early 90s.

The general idea of structuring certain routes together to affect, or create a specific reaction from the defense. Most pass concepts revolve around either creating mismatches for the offense to beat man-to-man coverage, or to attack zone defenses by either stretching defenders to create space, or by putting more receivers than defenders in some area of the field.

Some of the more popular concepts across the game are as follows:

Also known as “Open 6” or “All Go,” four verticals features four down-field routes designed to either attack man-to-man, or stretch a zone defense to create space in the intermediate areas of the field. Most receivers will have options to break off routes based on the coverage or the open areas of the zone.

LSU showed this variation in the spring game, a New Orleans Saints staple:

This concept revolves around stretching the defense horizontally to create space for an inside receiver running a “stick” route — a seven-yard option route in which the receiver will break away from the nearest defender and either turn to face his QB or continue to run to an open area. 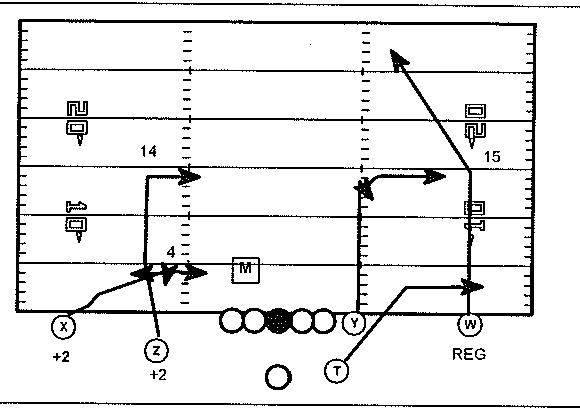 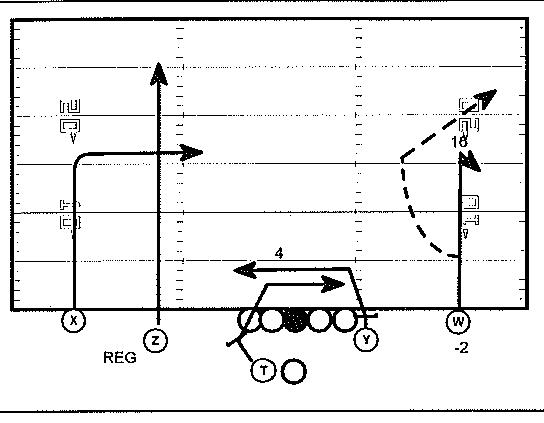 The offense uses three receivers at different vertical levels — a deep route, an intermediate in- or out-breaking route and a flat route — to stretch the defense and isolate a single receiver on a single defender. Effectively, turn zone coverage into man-to-man. The above examples illustrate three-level routes outside the hash marks and in the middle of the field.

Mesh is a popular concept characterized by a pair of interlocking shallow crossing routes that will either create a “rub” or a pick on man-to-man coverage, or stretch zone coverage horizontally.

A two-route concept that generally consists of a short hitch with a corner route breaking over the top. This concept puts the outside corner in a high-low bind.

Not the most popular of concepts but one Joe Brady has already stolen from Sean Payton and brought to Baton Rouge. Seth has broken the play down here and here. The goal is to isolate an inside receiver on the backside of an empty formation (or trips with the running back releasing early) against a linebacker and have him run inside or outside based on the leverage.

Consider this post a reference point for future breakdowns, and we’ll try to expand on the listing as things develop down the line.