A wise man once said that Pastalaya, the noodle-y cousin of Cajun tailgate staple Jambalaya, is “Jambalaya for people that can’t cook rice.”

This recipe comes via a cousin of mine. Aside from sharing a given name, we're both connoisseurs of LSU football and tailgating. No, he is not "West Philadelphia, born & raised" and he does not have a buddy named Jazz (sadly). He took over cooking duties for us the day of the slugfest with Alabama, and this dish was a hit with the entire crowd, including my in-laws, who were in town. As a result, the recipe was requested and made as a part of this year's Christmas festivities at my Mother-in-Law's house in West Monroe.

It was my hope to get this up prior to New Year's/gameday festivities, but real life intervened. Apologies, but trust me, the wait is worth it.

1. Throw your pork in a large pot or Dutch oven with enough oil to wet the pan, and brown over medium to high heat. In this case, I used some diced ham because that's what was available. It came out a bit saltier than I think would be ideal, so I'd suggest using some picnic shoulder or Boston Butt. 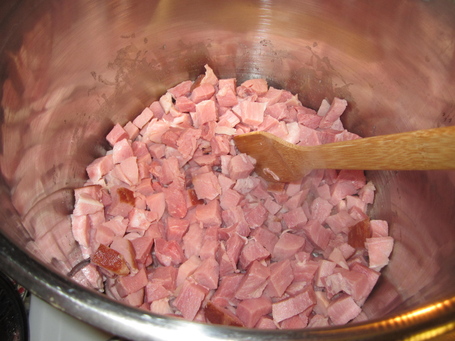 2. When the meat is about halfway done, add the diced sausage and finish browning until cooked, and then remove from the pot and set aside.

3. Add the diced onions, deglazing the pan slightly with some beer or white wine to help get up any stuck bits of the meat. Cook the onions until golden brown.

4. Add the bell pepper, celery and garlic and cook until completely wilted over medium heat. 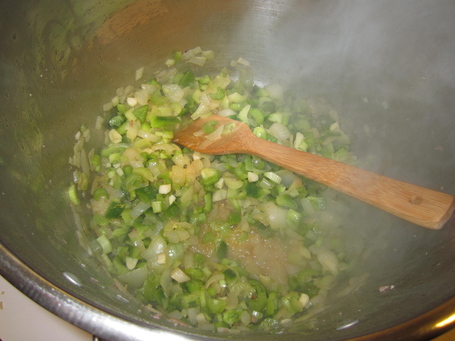 5. Add the meat back to the pot along with all remaining ingredients except the pasta. Add enough water to cover the mixture, increase heat, bring to a medium boil and boil for 30 minutes. 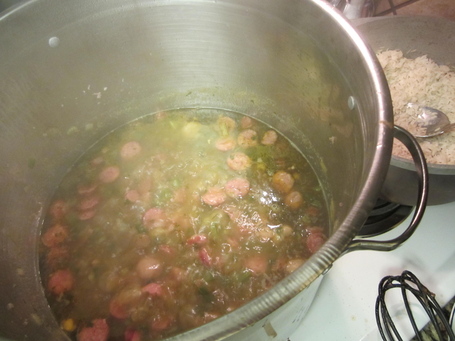 6. It's during this time that you'll want to add your seasonings and make the recipe your own. In my case, I used a teaspoon or so of liquid crab boil, a couple of teaspoons of Cajun Power Garlic Sauce, a few dashes of Worcestshire and a few pinches of cayenne pepper. The main things to remember here, is that you will lose some salt and pepper through the boil and when you add the pasta, so you actually want to over-season your liquid slightly above your taste.

7. Break your pasta into thirds or quarters and add to the pot. Make sure you have enough liquid to cover the mixture by about a quarter inch or so. You can always remove water as needed. 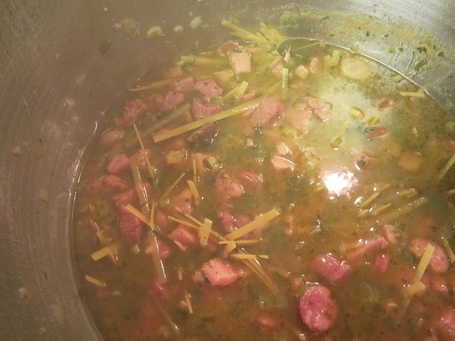 8. Boil until the water reduces to your desired level (again, you can always just remove some if things are a bit too soupy), then remove from heat and allow to sit for at least 15-20 minutes for the mixture to thicken. This will serve about 10-12 people. 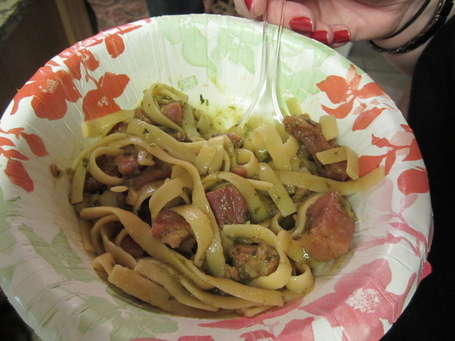