It's all right, it's okay, we're gonna work for them someday. 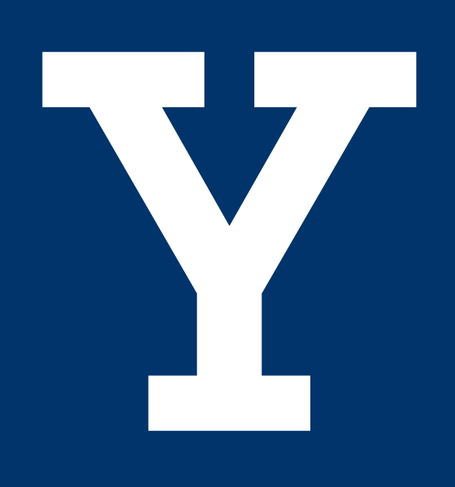 Yale currently leads the all-time series with LSU baseball. Sure, we've only played once, and that was in 1908, but a win is a win. Right now, Yale baseball has bragging rights over our Tigers. This weekend, LSU sets out to right a historic wrong.

Yale is a solid Ivy League team which means, well, it means they have a lot of smart kids who likely will be running very profitable companies in the near future. However, they do not field a nationally competitive baseball team. That 3-14 out of conference record was no fluke. This team struggled to score runs.

Don't let the black and white fool you, that's clearly a recent photo. Unless people were wearing novelty t-shirts in the 1940's. I do like the idea of B&W photography to class up the joint, it makes Yale baseball look folksy and friendly. Pull up a chair, bring some of those peanuts and Cracker Jack, and root for the home team to get their butts kicked.

PodKATT: No "old logo" this week, Yale still uses the same simple "Y" graphic that they have since the beginning of time. Special note on "Yale Field" pictured above: Until renovations in the late 60's, Yale had the highest capacity in college baseball at over 12,000.

Normally, I list a sampling of famous alumni, but Yale's alumni roster is so deep that this method seems woefully inadequate. Pretty much every person on your TV went to Yale. I'm just going by the Wikipedia count, which is likely leaving people off (and my hand count could be inaccurate), but Yale alumni include:

This is the kind of school that instead of giving us famous football players, it gave us Walter Camp, who founded the modern game of football. When I say we are all going to work for a Yalie, I'm not kidding. The least they can do is lose to us in baseball. 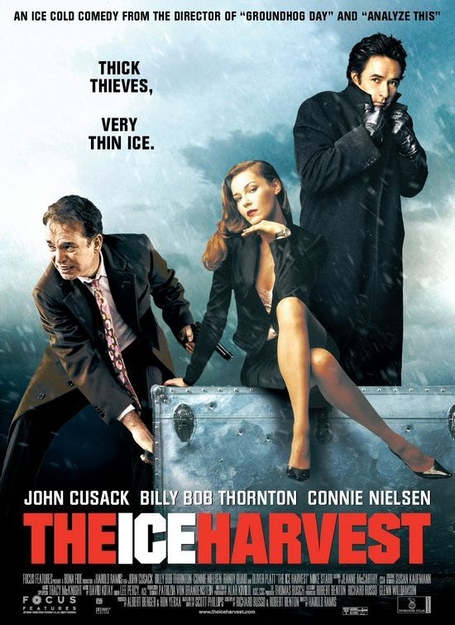 Like every other person of my generation, I loved Harold Ramis' movies. He shaped the very idea of what comedy is for me, and I can't even imagine a world without Caddyshack or Stripes. One of my very favorite things about Ramis' movies is that he made heroes out of loser, freaks, and oddballs. He defined success however he wanted, and his characters tended to opt out of the traditional meaning of success, which is why Animal House ends with a pointless and juvenile prank.

However, Ramis also made a few semi-serious films, including The Ice Harvest. The movie is still funny, but it is more of a cynical and black humor. John Cusack's mob lawyer could escape from Wichita with his psychotic partner, Billy Bob Thornton, but the roads are all iced over. So instead he has to hang out with his ex-wife's new husband while avoiding the mob boss and the hitmen he's hired to kill him. Sometimes, those oddballs aren't so funny, especially when they are no longer young guys taking on the system, but old guys crushed by it.

Not that bad of a group. Yale doesn't have the deepest of pens, and they are throwing out a freshman on Saturday, which seems to be overly optimistic, but the two seniors have pretty decent numbers. Hickey has a downright impressive line, and a really good K/BB ratio. I know there's a level of play issue there, but he's averaging nearly a strikeout per inning. Coleman's low ERA seems to be a bit more of a mirage, and I expect LSU hitters to get to him a little easier. But we shouldn't spend the weekend putting up a series of crooked numbers.

There's a near total absence of power on this team. Toups accounted for half of the team's home runs last year, which sounds impressive until you realize he only hit two all year. Lawson and Hunter combined for 13 doubles, and Toups was the only other player on the team to even have three. As a team, Yale hit 249/324/291. Yeah, that's not good. Not only did Yale not even reach a 300 SLG, they don't even have a .050 isolated power. Teams that have 290 hits, tend to have more than 339 total bases. That's just 39 extra base hits on the year, right at about one a game. One. They don't make up for this total lack of power hitting with speed on the basepaths, though they can work a walk. But this is not a good offense.

We only get to play Yale once a century, and if we don't pull off the sweep, the all-time series will be tied. That's just unacceptable, especially coming off a midweek loss to ULL. I can't face two bad baseball games in one week. Time to take out some anger on the nerds. Sorry, it's nothing personal. We need a big weekend to get the train back on track.