Share All sharing options for: GAMETHЯEAD: LSU vs Nicholls St., 6:30pm, No TV 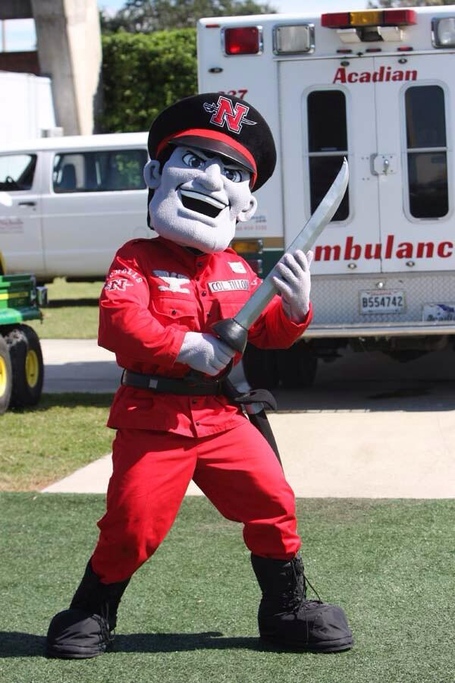 GREETINGS COMRADES! The Soviet Kolonels are back at The Box tonight, looking to catch the Tigers off-guard as the focus shifts to a Top Ten Showdown with Vandy this weekend. With the pitching rotation settled on Nola-Bouman-Poche',  Mainieri will send Jr. RHP Brady Domangue (1-0, 6.35 ERA, 5.2 IP, 4 BB, 2 SO) out for what is hopefully a long outing tonight, followed by a short start from Poche' and various bullpen arms tomorrow. Nicholls St. (8-8) is off to a rough, but not completely unexpected start, getting swept as opening weekend fodder for a good Houston team, going 2 of 3 at a home tournament that included a win over ULM, falling 1-0 to Tulane at home, and splitting a 4 game series at home against BYU that included giving up a no-hitter. The Kolonels have 1 big weapon in Sr RF Keith Cormier (323/380/419) who made 9 hits batting cleanup last weekend and is the reigning Louisiana College Hitter of the Week. On the mound, Nicholls is a bit depleted after a 4 game weekend and will be giving reliever Jr. LHP Mike Hanchar (0-0, 0.00 ERA, 8.0 IP, 5 BB 8 SO) his first start. Their staff ERA is only 2.11 and they are fielding at a decent .963. If LSU sleepwalks through this with their minds on Nashville, the Kolonels could steal one.

Let's hope not. Win this one for LSU! AND AMERICA!