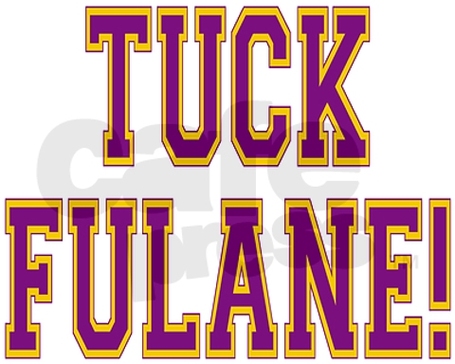 Tonight is going to be an important night for LSU's taxed bullpen With the lingering injury to Kyle Bouman and Kurt McCune's less than stellar start on Sunday, I think tonight could be yet another shot for Cody Glenn (1-1, 4.37 ERA, 22.2 IP, 3 BB, 11 SO) to earn a weekend gig again this Sunday at Florida. Coach Mainieri has said as much himself, possibly with an undertone that Glenn might also be without the mid-week starting role if things don't improve. The rest of the bottom of LSU's bullpen, guys like McCune, Hunter Devall, and Brady Domangue will also get their chances tonight as the rest of the staff won't go on short rest unless absolutely necessary. Somebody needs to step up, and there should be no lack of motivation tonight on the blasphemous carpet of Turchin Stadium.

Tulane (12-11, 5-4 in CUSA) is in the midst of another bad year. The Greenies have losses to UL-L, SLU, and UNO. In that UNO loss, a 7-3 beating, The Greenies showed the true class of Tulane by ending a bid for a no-hitter in the 8th with a cheap bunt, nearly causing a brawl. On top of all this fail, the Greenies have been dealing with a stadium that had no lights for most of February. Tulane is led at the plate by leadoff LF Richard Carthon (317/431/378) and 1B Garrett Deschamp (301/381/458 24RBI). They'll be starting Fr. RHP Corey Merrill (0-1, 5.79 ERA, 14.0 IP, 10 BB, 10 SO) who has 3 midweek starts under him, but no long appearances and the Greenies will use a parade of arms from a bullpen with a 3.43 ERA. That looks like a good number on paper until you see that it's brought so low by 6 relief pitchers with 0 ERA and none more than 5 IP. Their bullpen that has had more use has an ERA closer to 6.00. Tulane will also be without their head coach Rick Jones, who missed all of last weekend due to illness and wont be back with the team until after this weekend.

No TV tonight because Cox Sports is actually hosting an Alabama baseball game at the minor league park they own in Pensacola. And the game also wont be on the full LSU radio network due to the Women's NIT game. Thankfully, LSU is streaming this one in the GeauxZone for free tonight. You could also pay Tulane to watch it, if you feel like giving those people money.