It gets real in Gainesville 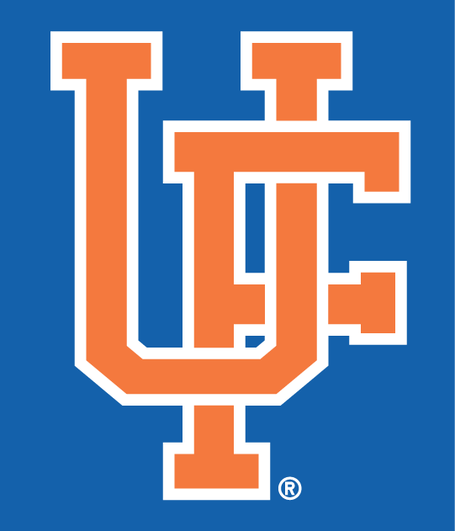 Two talented preseason favorites will meet in Gainesville this weekend, and neither is exactly playing like they would like to be. LSU sits at a 3-2-1 in the SEC and Florida is 3-3, but even more concerning is that neither team has really looked all that good so far this year. This is a chance for someone to turn it around.

The RPI loves Florida, while the more "advanced" ISR formula thinks they are a fairly average team. This is a team that beat Florida St, lost a weekend series to A&M, and then beat FSU again. So, you're guess is as good as mine right now. This Gators team is all over the place, unlike the LSU team, which is just playing thoroughly mediocre baseball. I will note that Florida's RS/RA ratio is pretty encouraging for LSU. Maybe there's a great team lurking there, but it hasn't shown itself yet.

I hate pictures of other SEC teams being happy. Clearly though, that picture is not from Omaha. It's from Hoover. PK: No outfield seating at Hoover. Based on the maroon in the stands and the buildings in the back, that's Starkvegas. So at least there is that.

A simple, sensible, interlocking UF. But according to records, it was created in the early 90's. The Gators also have some pretty sweet throwbacks in their regular rotation. 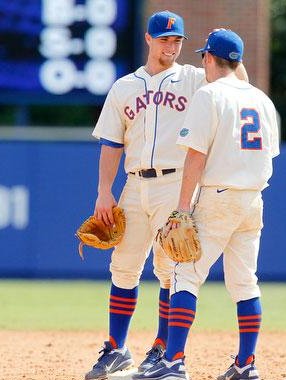 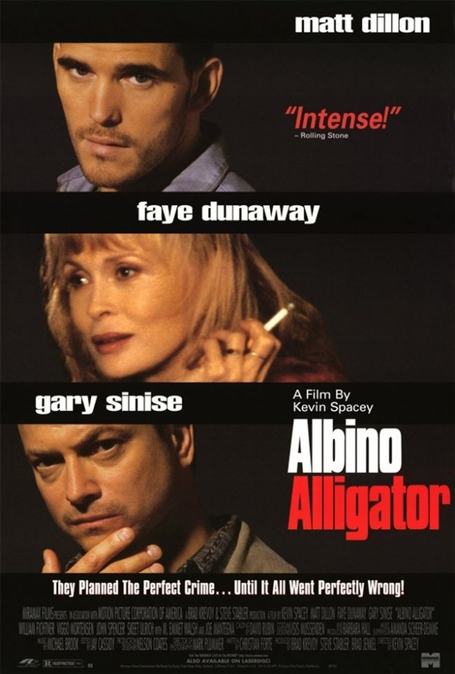 Was there some sort of rule that all movie posters had to look like this in the 90s? Anyway, this week's film is doubly themed, as Faye Dunaway is a Florida Gator alum. You may now Tiger Bait her at your leisure. Also, as we get into SEC play, I'm dropping the Notable Alumni section, as we already know our opponent. I'm open to suggestions of what to replace it with. It'll return in the postseason, if LSU makes it.

Albino Alligator is Kevin Spacey's directorial debut, and it is a simple film of three small time crooks trapped in a bar, cornered by the police. This wasn't a terribly well-reviewed film and I hesitate to call it a cult classic, but I'm always a sucker for a good thriller, especially one that is really just an excuse for talented actors to bounce dialogue off one another. The movie is supposed to belong to Matt Dillon and Dunaway, but really, the leering William Fichtner steals the show, as he is one of the best "that guy" actors at playing assorted scumbags and generally amoral jerks.

To Be Determined is always a threat. I'll take Nola on just about any Friday starter in the country, but the Gators seem to have the edge on Saturday. Logan Shore has shown up on campus and immediately made a huge impact. That ERA is not a fluke. Florida's 2.95 ERA sounds great, but that ranks 11th in the SEC.

This just in, the new bats f'n suck.

Not a ton of power, as the team has a higher OBP than SLG (by a single point, so let's not go crazy here). The Gators have tried to run, and Martin is a real threat, but outside of his 7/9 rate, the team is 9 of 19, which is pretty awful. This is an offense that hasn't found its identity and it doesn't really do anything real well, but when you look at the talent, you can't figure out why. Sound familiar?

Florida's at home, so there's no way LSU goes in there and gets the sweep, but this Florida team is not playing well right now except when they play FSU. Maybe they will confuse LSU for FSU and we'll be in trouble. Now the Tigers have had their own offensive struggles, but the Gators look like a team on the brink of utter collapse.

Which clearly means they will take 2 of 3 and win the series. Because SEC baseball makes no sense this year.