Share All sharing options for: Better Know an Opponent: Arkansas

What a difference a week makes. Last week, LSU looked like a reeling team that was headed for a second division finish. Now, LSU looks like one of the favorites in the West again. That speaks to how good we played against State, but also how tightly packed the whole conference is. There's almost no margin of error. Now another .500 team comes to the Box to face our .500 team.

The Hogs lost two of three to both Florida and State, so this series should be cake, right? Well, they also have series wins over Bama and South Carolina, so that 6-6 record might be a bit deceiving. No one has played a tougher schedule than Arkansas so far, and they have come through it still in the hunt. They have definitely shown themselves able to compete with anyone in the SEC. 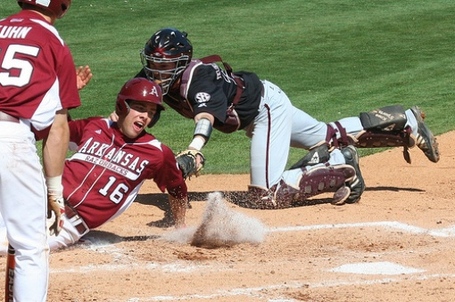 Could there be a more perfect encapsulation of Arkansas baseball? Even as a dedicated hater of small ball, I do admire Arkansas' hustle. This is a team that has made its reputation by being aggressive on the basepaths, taking whatever they can and being given nothing. This current Arkansas team doesn't run as much as you'd expect, but they still are the SEC's answer to the Dirtbags.

But he's clearly outside the baseline. He should be called out. 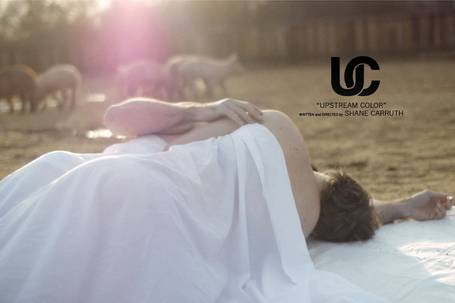 Shane Carruth has only made two movies, and both are downright brilliant, yet dizzyingly complex puzzles. Primer is already a cult classic, and it's a time travel movie with so many layers that it makes Inception look like Winnie the Pooh. Despite that film's relative success, it took Carruth nearly a decade to put enough money together to make his follow up, an even more challenging film, Upstream Color.

I've only seen the movie twice, so I'm not quite sure what it's about, and no, that is not a joke. Essentially, the film is about a three-stage parasite that infects an orchid, a human, a pig, and then back to the orchid. The infected humans are influenced by the emotions of the pigs, which has disastrous consequences for already doomed people, who were not only infected but were robbed of all of their money by a character known only as the Thief. If you want a movie you can watch over and over again, and try and pick apart to figure out all of the threads and where cycles begin to spiral out of control, this is your movie. The link to Arkansas is pretty clear, as this is the best movie ever made in which pigs are the stars.

That's an impressive, deep starting rotation, but Killian seems to be taking one for the team this week. Beeks has pitched on Friday for all of Arkansas's SEC series (including the 2nd game of a DH last Friday) but was unexpectedly moved to Saturday for this series. There's no threat of bad weather moving games around this weekend, so we are now facing a team who has decided to spare their Ace from having to go head-to-head with Nola. Arkansas has a staff ERA of 2.30, so there's no relief for LSU if they get to the pen. Michael Gunn not only has 5 saves, he has an ERA of 0.00. Let's not go to the ninth inning needing a run.

This is not a great hitting team. These are the only three hitters on the Hogs to clear a 400 slugging percentage. Arkansas hits 259/360/346 as a team. Anderson and Spoon's 6 homers comprise half of the team's bombs. As I mentioned, Arkansas can run, but 24 of 30 steals doesn't quite make up for the giant power gap on this team.

My unreliable prediction has been just that this season, so I could go for the reverse jinx and pick Arkansas to sweep this series, but I'm pretty sure I don't have those kind of powers to influence the games. LSU has the huge advantage on Friday, as per the norm. For the rest of the weekend, LSU should have the advantage at the plate, if last week's turnaround is real, while Arkansas has the edge on defense. LSU is playing this series at home, and let's say that the not so friendly confines of the Box is the difference. LSU should take 2 of 3 this weekend.